Appeared in 2006 and revamped in 2010, the XMAX 125 has remained at the top of sales since then with more than 8,000 sales in 2011. Yamaha thus seems to have found the vein to truster the top of sales with its two flagship scooters that are the TMax and its 125 cm3 version: the X-MAX. Same bad boy look, large storage capacity, behavior, neat finish continue to favor this model in the face of increasingly numerous and often cheaper competition. So, a deserved success ? 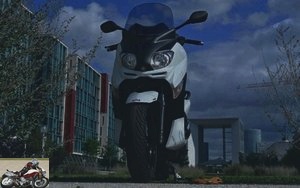 The Yamaha XMax offers a nice, aggressive line with two incisive headlights. Despite large diameter wheels of 15 inches at the front and 14 inches at the rear, the overall size remains massive and sporty. A long topstitched saddle offers ample seating. There is also a pretty metal plate inlaid TMax at the end of the saddle with the most beautiful effect.. 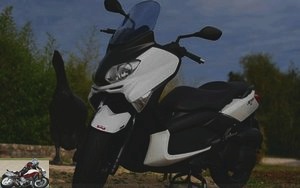 The plastics are high-quality and the fairing parts do not suffer from any casing defects, further reinforced by a matte black. The white color is the most beautiful effect for the almost business aspect, signed with the two passenger handles in black. The exhaust is quite thin and discreet with its aluminum protection on a black body. 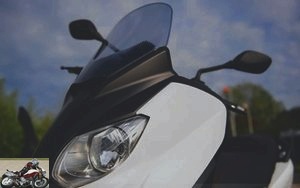 With 14 horsepower at 8,750 rpm, the XMax is also in the high power range offered by this type of displacement. The reason for success ? 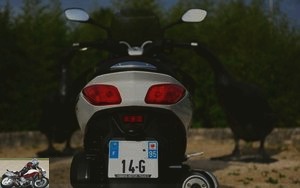 Despite a relative saddle height of only 775mm (when some are at 800mm), the feet barely touch the ground for the 1.70m rider; the fault of a relatively wide saddle. Fortunately, the apparently high weight of 173 kilos fully loaded is well placed, very low (176 kilos in the ABS version). In addition, the driving position, upright, is really natural, even ideal. As a result, low-speed maneuvers are particularly facilitated. 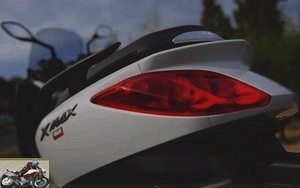 Under the eyes, the double counter and round analog tachometer appear sporty with their double brushed aluminum rim and are above all very readable, even without lowering your head. The whole thing integrates especially in its center a digital display with a real precise 5-segment gasoline gauge, as well as a clock, a partial double trip and a totalizer. Well positioned, everything is very readable in all circumstances, without taking your eyes off the road. The commodos are well placed and we note the presence of an easily triggered warning on the right.
The large central beam limits a little the space for the feet or the possibility of placing a bag. 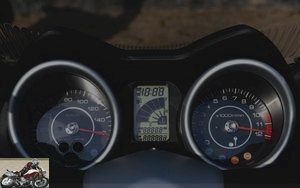 The 125 snorts with a discreet, qualitative noise. The right grip pushes the tachometer needle up to 7,500 rpm instantly, while a lag time sets in before launching the scooter. The engine noise is there, and so is the needle, but the horses come next. Despite this impression, the XMax does well in the standing start game even if it is not always the first to start.. 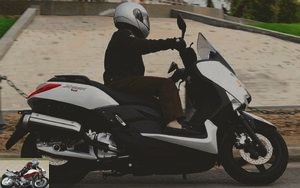 Thin, light, with an excellent steering angle of 80cm, the XMax easily squeezes between cars, with the ability to interfile at high speed. Once launched, it continues to climb steadily in towers and speed for unspeakable speeds in town anyway. Braking is healthy in all circumstances, especially with discreet ABS in its start-up. 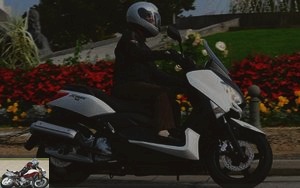 The XMax is driven willingly – for lack of speed – on the motorway. The counter rises regularly to 80 km / h then voluntarily to reach a good 120 km / h on a flat, even false flat, including in duo. On a slight slope, it even accepts a 124 km / h (115 km / h real, the odometer overestimating on average 10 km / h the real speed), speed at which it then tops out at 9,500 rpm. At the slightest deceleration, the counter goes down and takes several minutes before regaining its maximum speed, not offering any real pick-ups. And if the flat is uphill, the counter gradually drops to 100 km / h.

On the other hand, its behavior is very stable even at its maximum speed, whether solo or in duo, and including on degraded pavement. It does not wiggle or wave like the brand’s Majesty 400, for example, can do at the same speed. Suddenly, we can stay quietly at this speed, "peak".

At this speed, the bubble is well positioned and provides sufficient protection without generating the slightest swirl or noise on the helmet, allowing almost longer journeys on the fast lane to be envisaged, especially with the model’s wide possible range.. 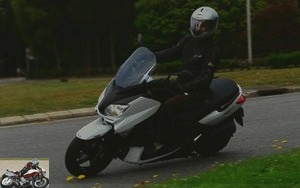 The XMax readily finds slower roads to find its rhythm on smaller roads, especially since its handling and particularly healthy behavior allow for a series of turns very quickly and in complete safety.. 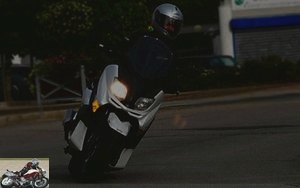 Despite a single disc at the front (267 mm) and at the rear (240 mm), the braking offers all the necessary power, largely up to the inclinations of the machine. Obviously, since the 125 benefits from exactly the same braking as the X-Max 250! Tight, the front brake is even powerful, making the front dive noticeably. The whole thing ensures a powerful braking with a rather good feeling and a good progressiveness. It will not surprise beginners even when caught in a violent way. ABS is quite difficult to trigger except in the rain and on your own. Not very intrusive, it is reassuring on a daily basis. 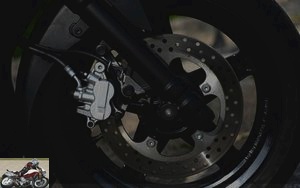 The rider saddle is wide and offers several possible positions. The passenger is also largely at ease with room and an excellent position of the handles. The two rear shock absorbers adjustable in 4 positions are on the other hand firm and make you feel the defects of the road quite well. While some scooters – both the 125 and the TMax – erase almost all road defects, even some potholes, this is not the case with the XMax, which offers sporty comfort. 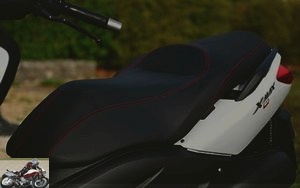 The XMas undoubtedly offers the largest capacity of trunk for a 125cm3, even of the scooter category. Two full-face helmets (even modular) can be accommodated without worry and there is still room for a rain suit, or even a small laptop.. 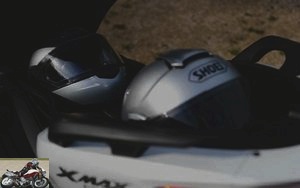 The glove box at the front is large, unlike in the usual market where you can often barely place a mobile. 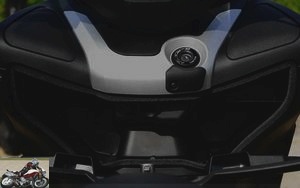 The scooter is placed without any difficulty on its central stand.

We regret on the other hand the absence of parking brake. 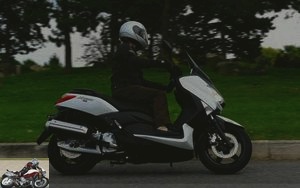 Excellent well finished with a real storage capacity, the XMax offers both a sporty look and exemplary behavior both in terms of frame and braking, a guarantee of safety. Reasonable consumption and impressive autonomy make it a must. Only its high price of 4,199 euros excluding promotions and a lower comfort compared to some more opulent scooters constitute its weak point; which has not stopped its owners, who applaud it, as evidenced by the sales records in recent years.

The technical sheet of the XMax 125