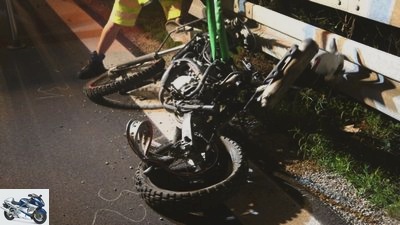 16-year-old fatally injured on A96
Cause: illegal car racing?

A nightmare that became bitter reality: On the A96 in Bavaria, an Audi driver rams a 125 from behind at high speed. The 16-year-old dies at the scene of the accident, the driver remains uninjured.

The police do not rule out that an illegal car race was the cause of the accident and are looking for witnesses.

The driver of the Audi A4 RS model (420 hp) later told the police that he first thought of a blown tire. The fact that he had not actually seen a 125cc in the right-hand lane and had rammed it from behind was apparently not even known to him due to his extremely high speed.

The Audi must have been extremely fast, the police confirm. The uninjured driver also stated that he had previously been cut by a bright BMW at a very high speed. The only 16-year-old driver of a 125cc enduro had no chance, he was instantly dead.

The police do not rule out that a kind of race on the A96 had previously taken place between the Audi and the BMW. That is a speculation, but also a possibility, “that we are pursuing”, said a police spokesman for the Augsburger Allgemeine Zeitung. The Audi driver is now being investigated for negligent homicide.

Specifically, the police are now looking for witnesses who on Tuesday, July 18, 2017, at around 10 p.m. on the A96 near Bad Worishofen in the direction of Landsberg, noticed a black Audi with MN license plates and a light-colored BMW, both at high speed. Notes on the phone 08331/100311 or by email to pp-sws.memmingen.aps@polizei.bayern.de.