Sacred Erik! The 9 and 12 Rs were not enough for him, he had to design an even more radical machine.. Its new XBRR is so much so that it can only be used on the track (the beast will not be road approved). XBRR identifies itself as a “homecoming” for Erik Buell – In the mid-1980s, this American engineer was building his own race bike for the AMA championship: the RW 750. This XB perpetuates the memory and racing spirit dear to Erik. With its frame tank and swingarm containing oil, the machine remains ultra compact … now with a modifiable wheelbase: the linkage axis is adjustable, allowing the wheel distance to be set between 1315 and 1367 mm, this to adapt to different types of circuit. Buell entrusts its suspensions to Ohlins and the braking to a perimeter disc clamped by an 8-piston caliper (6 on the road versions). Magnesium rims weigh 1/3 less than standard.

Always faithful to Harley, the small subsidiary powers the XBRR with a V-twin increased to 1339 cm3 and 150 horsepower. The engine is powered by 62mm twin-barrel injectors and a RAM AIR intake embedded in the fairing. The casing is also in carbon fiber. Intake ducts above the tank allow fresh air to cool the engine oil cooler.
This Buell XBRR will be produced in 50 copies for an indigestible price of 30,000 roros. 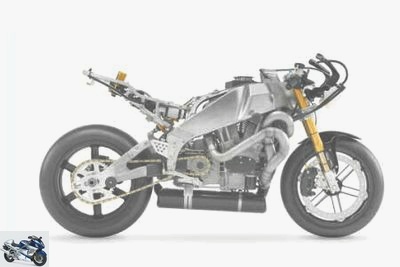