Full in the irons with a full lean? There are things that no normal motorcyclist does voluntarily. And yet it can happen at any time: panic braking in a terrifying situation. Is there any fall insurance? We dared to try it: four current anti-lock braking systems in the endurance test.

Do you want to be a motorcycle test driver one day? A great life, think now: Travel to distant countries, check in in posh hotels, the fleet fuel card in your wallet and always a perfectly prepared motorcycle under your bum. Is there a catch? Naturally. And now we're going to describe it: On-site visit at the Paul Ricard Circuit in Le Castellet, southern France. Out of the cozy, warm driver's cab of the Sprinter, outside we are greeted by a gloomy, damp, cold winter's day. Bonjour sadness! Definitely no weather to hunt for times on the legendary Racetrack, but that wasn't the plan anyway. 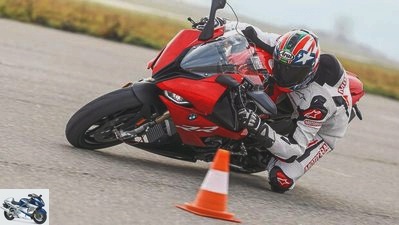 Kneel on the floor and then: full iron!

Because off the racetrack, we found the perfect circular path using Google Maps (see previous double page), which already offers very modest grip conditions with a smoothly sanded asphalt surface. The adverse weather and the low temperatures also play into our cards. After all, we want to compare the curve function of four different anti-lock braking systems, and not when the sun is shining, but in situations where it is particularly in demand and demand: in the worst case, in a worst-case scenario, when things just get tricky. 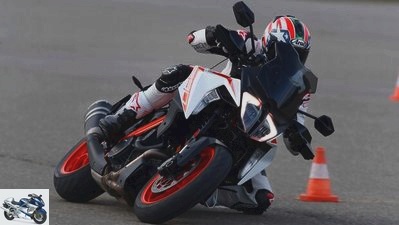 The experimental setup is ready, what is missing? Of course, the willing test driver. He must now be particularly tough, because what is required would not be a normal Otto driver "on command" make. Curl up, tilt, kneel on the floor and then: full iron! Do not dose! Pull through blindly until it stops! Simply that way! Back to the initial question: Do you still want to be a motorcycle test driver??

Of course, this contradicts our conditioning as a motorcyclist, which is sometimes decades old – simply putting the brakes on in full incline. Nevertheless, there can be enough frightful situations that trigger the impulse necessary for survival in us: BRAKES !!! NOW!!! Then nobody doses any more, then everyone instinctively grabs the lever and grabs mercilessly.

The test driver must be particularly tough, because now it's time to curl up, lean, knees on the ground and then: full on the iron! Do not dose! Pull through blindly until it stops! Simply that way!

From a purely physical point of view, the standard ABS brake is of course overwhelmed by this situation. If the weather is bad, there is a risk of a fall of less than 30 percent when the brakes are braked too much due to too much slip on the front wheel. But now the big hour has come for ABS braking systems, which are equipped with a cornering function. In terms of hardware, these systems do not differ greatly from conventional anti-block systems, but a gyro sensor (also called IMU, inertial measuring unit) is indispensable, with which the inclination is recorded. The actual complexity is stored in the control units in the form of bits and bytes. ModusOperandi: How much brake pressure is permitted in the respective driving situation? 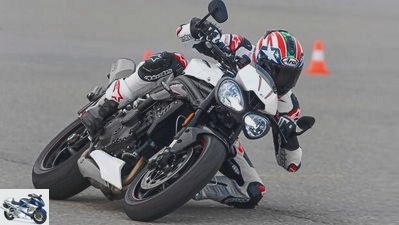 For this purpose, the brake systems can also short-circuit with the vehicle's traction control, for example. Enough of the gray theory, we are much more interested in this gray day in how four differently structured systems from two leading providers (Bosch, Continental) work in practice.

Essentially, both suppliers are each one "easier" and a "more complex" Cornering anti-lock braking system. That Bosch The MSC plus and the Conti MK100 MAB also record the brake pressure with one sensor each, the MSC enhanced and the MK100 MIB EVO with four pressure sensors and partially or fully integral functions currently represent the ultimate in control performance. Now let's do the extreme test without scratches and bruises ? Try makes kluch …

Bosch MSC plus in the Ducati Panigale V4 S Corse

Carrier vehicle for our experiment with the "simple" Bosch system is the exclusive Ducati Panigale V4 S Corse. However, the Stuttgart-based supplier does not limit itself to a pure ABS, but rather couples it as a "Motorcycle stability control" (MSC) also with traction control. Both control systems are networked via CAN data bus in such a way that the ABS can also send torque specifications in order to e.g. B. to ensure optimal traction in an inclined position. In the version "plus" the Bosch MSC works with a pressure sensor that measures the actual pressure in the hand brake pump. All other pressures (rear, brake calipers) are calculated. The MSC plus works independently of the brake circuit; the driver alone activates the front and / or rear brake. The design also focused on the compact design and low weight (approx. 650 grams).

Bosch MSC plus in the Ducati Panigale V4 S Corse: It works independently of the brake circuit, the driver alone activates the front and / or rear brake.

Conclusion: In the Ducati application, the Bosch MSC plus can be operated in three modes from "safe" until "extreme" vote. ABS 3 is trimmed for safety and brings the Panigale to a safe stop in the event of a panic braking in an inclined position. With ABS 2, things get a lot trickier (slip, stoppy tendency, see diagram), ABS 1 cannot be simulated as an attempt.

The second super sports car in our ABS comparison relies on a significantly more complex system from the supplier Continental. The BMW S 1000 RR, which was newly released in 2019, is fitted with the MK100 MIB EVO, which in addition to the cornering ABS function also includes a partially integral control – recognizable by the abbreviation MIB, which stands for motorcycle integral braking system. For optimal braking force distribution, the Conti-ABS receives information from four pressure sensors that are positioned on the main brake cylinders and on the wheels (brake calipers). Even if the driver only applies the front brake, the rear wheel is also braked for optimal power distribution. The IMU unit required to detect the tilt could also be integrated on the circuit board of the system, which weighs around 1100 grams – but this was not implemented by BMW.

Conti MK100 MIB EVO in the BMW S 1000 RR: Even if the driver only applies the front brake, the rear wheel is also braked for optimal power distribution.

Conclusion: With up to five ABS setting options, the BMW covers almost every braking situation. The curve function in the Rain, Road and Dynamic modes (not available in Race / Race Pro) is very convincing. The simulated startle braking in a high lean angle remains controllable even in the sharp dynamic mode. Rain and Road rely on absolute safety.

Test motorcycle number three is also equipped with a Conti system, but the Triumph has it "simpler ones" MK100 MAB is used. Like the Bosch MSC plus in the Ducati Panigale V4 S, this Conti model in the Speed ​​Triple RS uses only one pressure sensor, which is installed in the front wheel brake circuit. The standard ABS functions could do without a pressure sensor, but this is indispensable in order to adapt safe ABS control even in an inclined position. Optionally, depending on the requirements of the vehicle manufacturer, the MK100 MAB, which weighs 620 grams, can also be fitted with a sports ABS for the racetrack or an off-road ABS. Triumph's Power Naked Bike has two ABS modes to choose from (Road, Track), with the cornering ABS function and the lift detection of the rear wheel being deactivated in Track mode.

Conti MK100 MAB in the Triumph Speed ​​Triple RS: The bottom line is that the Triumph comes to a safe stop both straight ahead and in road mode with a simulated emergency braking in an inclined position.

Conclusion: The bottom line is that the Triumph comes to a safe stop both in a straight line and in road mode with a simulated shock braking in an inclined position. But: The control intervals of the Conti system can be felt more clearly on the handlebars of the Speed ​​Triple RS than on the KTM (Modus Road), BMW (Rain and Road) or Ducati (ABS 3).

The second all-round athlete in this test constellation has a much more complex ABS tool on board. Supplier Bosch is contributing the MSC enhanced for the KTM 1290 Super Duke GT, which – comparable to the Conti ABS in the BMW S 1000 RR – is equipped with four pressure sensors on both master brake cylinders (brake lever and pedal) and wheels (brake calipers). Unlike the MSC plus already described in the Ducati Panigale, this Bosch model in the KTM works as a partially integral system and also distributes the brake pressure to the rear when the handbrake lever is operated. If it is requested by the manufacturer, it could also be adapted as a fully integrated solution and then evenly distribute the pressure to both wheels, regardless of whether the brakes are applied at the front or rear. At 1,150 grams, the MSC enhanced is roughly as heavy as the BMW Conti-Integral ABS.

Bosch MSC enhanced in the KTM 1290 Super Duke GT: It works as a partially integral system and also distributes the brake pressure to the rear when the handbrake lever is operated.

Conclusion: KTM has tuned the ABS cornering function very defensively. Compared to full braking when driving straight ahead, you can clearly feel when doing the same exercise in an inclined position, like the one initiated via the handbrake lever "full pressure" is literally regulated away on the pliers. However, the 1290 can be brought to a steady, stable and safe stand.

… from my machine and it already helped me.

… from my machine, but only on paper.

Is there the ultimate fall insurance? No, of course even the best assistance systems are not immune to simple physics. Anticipatory driving is still the top priority if you want to stay on top. However, our test also clearly shows that the current ABS generation with integrated cornering function can contribute a great deal to a safe situation in an extreme situation. When there is imminent danger, everyone reflexively reaches into the iron. Probably the one whose motorcycle is then braked down stably via sophisticated control electronics. Our test simulation gave all four systems from the two major suppliers Bosch and Continental good marks. Not a single cornering ABS failed in our attempt – even if there are of course measurable differences under the microscope.