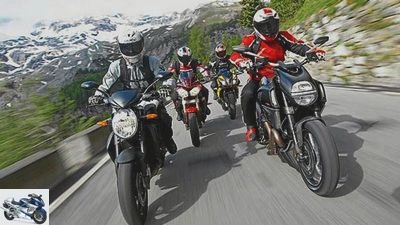 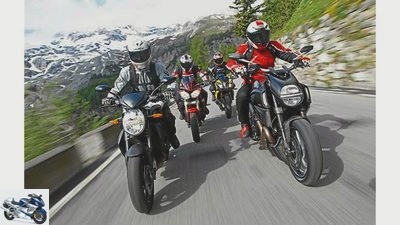 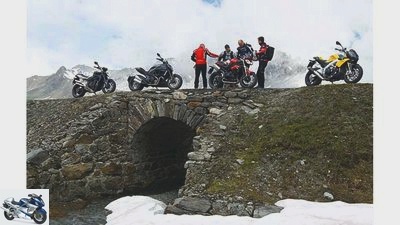 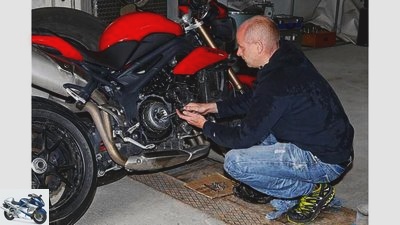 The central nut of the coupling has come loose. An impact wrench fixes the problem, it can go on. 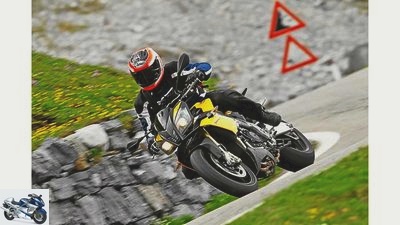 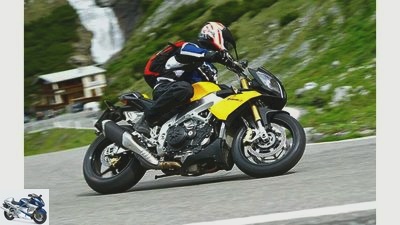 5/12
Aprilia Tuono V4 R APRC – PLUS: Chassis sets standards in terms of precision, handling and feedback, traction control in eight stages with great functionality. MINUS: engine limp out of the bends, consumption highest in its class, comfort very clear. 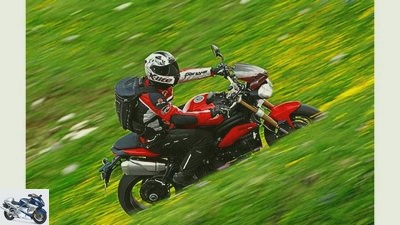 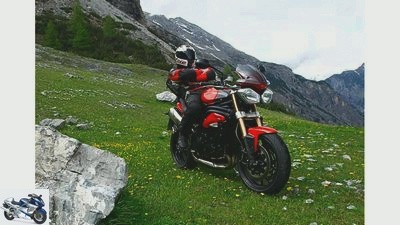 7/12
Triumph Speed ​​Triple – PLUS: The engine has pressure everywhere, the chassis is firm and manageable, and ergonomics have succeeded. MINUS: Throttle response a bit rough, comfort was already higher, transmission hard and rough. 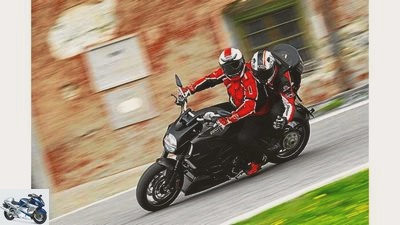 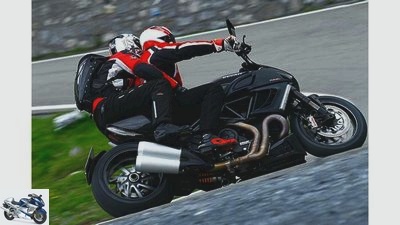 9/12
Ducati Diavel – PLUS: the engine pushes like a cover, the brakes can be finely adjusted, ABS, and the handling is surprisingly good. MINUS: Sitting position is not ideal, comfort could be greater, payload not for fat people 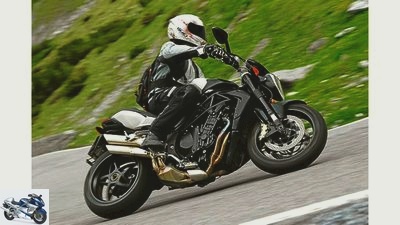 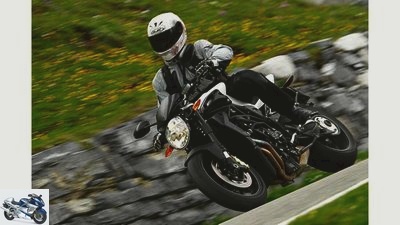 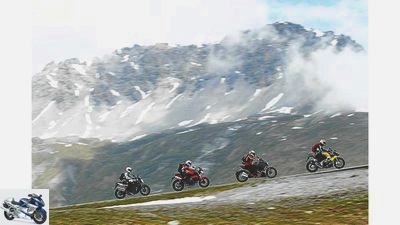 12/12
Conclusion Big Bikes: A favorite victory, of course. For years, the opponents have been grappling with the Triumph Speed ​​Triple. Because this combination of characteristic three-cylinder, extroverted appearance and absolute suitability for everyday use is difficult to crack.

There are motorbikes that come to the yoke for leisurely sightseeing. Not here. Aprilia, Ducati, MV and Triumph eat vertical meters like dairy cows on alpine grass. Beam up the short straights as if there were no hairpin bends. In this environment, even a Ducati Diavel becomes a passport junkie.

Japan. Where is Japan? This classic question from the unforgettable sports reporter Bruno Moravetz hangs in the thin air over the turns of the Stelvio Pass. England storms with the extrovert Speed ​​triple uphill, Italy is in the big bike race with three representatives.

That’s it. Japan does not take place. At least not in this field of big naked people. Japan has nothing new to offer this year. And before anyone gets that down the wrong track: No, MOTORRAD has them too Diavel not taken because she would be a contender for group victory. The reason is rather her multiple personality, which promises a lot of tension in this special environment. Even the predictions about how the flat iron will feel on this hairpin marathon are worlds apart. The Diavel on the Stilfser Joch – that is an intense experience. Whoever ascends below does not want to descend above. In between there is almost everything that can be experienced on a motorcycle.

Second: clear respect, mixed with a hint of pleasure. Hey, something’s going on here. It doesn’t matter how steep it is. No wonder, after all, the Desmo-Twin sends 90 Newton meters to the crankshaft even below 3000 rpm. He pushes the boom as if there was no tomorrow, with a live weight of a good 240 kilograms, he has an easy job.

Third? Surprise! Oops, that slows you down! No wonder, given the Brembo superbike stoppers from the 1198, combined with the corresponding ABS technology and a stable and elegant upside-down fork and 1590 millimeter wheelbase, which keep the rear wheel on the ground even on the steepest ramp.

Fourth? Astonish! Sapperlot, that really gives way. In the narrow yoke radii, the Diavel does not fail because of a fork that is too flat, or because of peculiar turning behavior or lack of lean angle. Even its 240 mm rear tire is not as big a handicap as its width would suggest, thanks to the restrained 45 mm cross-section. Of course, it doesn’t work out as neutrally and simply as its naked bike competition. Bigger, however, is an entirely different problem.

Fifth: Despite all the qualities, long arms and appropriate effort are required to safely guide the wide handlebars in the sharp turns. Those who are willing to do so will not lose touch with the front. And sixth, is thievingly pleased to keep watching the astonished look of the person in front in the rear-view mirror. Even after 48 hairpin bends.

The Aprilia driver, for example, because the young wild from Noale is high on the favorites list for some. Its formidable handling and the outstanding chassis qualities, proven in numerous tests, should also convince here in the thicket of bends in combination with the active seating position and the powerful engine. Maybe not when it comes to getting on the yoke as comfortably as possible, because a healthy hardness cannot be denied, especially the shock absorber. But at the latest when things have to go very quickly.

But nothing will come of it. Or better: not so easily. Because although the Tuono kept its suspension promise in full and set the standard in practically every suspension criterion in the narrow bends of the east ramp as well as in the more extensive course of the west ramp, it dragged a huge mishap on the yoke that under normal test conditions clearly not noticed. It is the almost reluctance to perform, with which the high-performance V4 literally torments man and machine out of the hairpin bends. The result: The rider in a hurry lets the clutch slip and sweeps out of the bend at high speed.

This is reminiscent of blissful Class IV times, is unworthy of a 1000. And in view of the already mighty loud V4 it is not only an adolescent, but also exhausting pleasure in the long run.

It’s good that the Tuono in the APRC version has a perfectly functioning traction control. Otherwise, an overly hasty clutch hand here, where the wall lurks on one side and the abyss on the other, could quickly lead to painful and expensive consequences. No, the Tuono was not developed in Alpine turns. So it’s no wonder that this weakness, together with the many others that affect the tourist aspect (see scoring on page 34), leads to the quasi-athlete’s early retirement. And with the two remaining candidates, well-founded hopes of overall victory are fueled.

Yes, you read that right. MV Agusta Brutal 920 – and justified hopes for the overall victory. At least as surprising as the poor performance of the Aprilia-V4 is the committed appearance that the “small” Brutal with “only” around 130 hp pounding into the crumbly yoke asphalt. Just the start, with which her row four pushes the 213 kilogram light MV out of the bends, has a completely different quality than the clutch-killing Tuono gag. Except for a small, barely noticeable drop at 3500 rpm while driving, the marches “small” Brutale engine exemplary through the rev range, only suffers from the already MV-typical delayed throttle response, which causes annoyance at the apex of the sharp turns until you have found the optimal timing. The well-proportioned rest, however – all respect! The small 920 also benefits significantly from the comfortable suspension set-up that has recently become common in Varese, with fine response behavior, which in return, with two people and luggage, quickly reaches the limits of its suspension elements. But in the long run you won’t want to put the second row here, on the narrow and bumpy terrain, on anyone. In one-person operation, however, the 920 purrs smoothly and without great effort uphill, hardly gives cause for criticism, is surprisingly uncomplicated. If anything, there are complaints about the ergonomics: there is not much space on the Brutale, the footrests are slippery and short, the tight steering angle makes turning difficult, and there is no ABS at all. The last point in particular takes a lot of points.

So the bottom line is what had to come. Despite a tight run-in, the big bike crown goes to someone who is used to winning. Simply because, despite her extroverted appearance, she hardly affords a weakness. The famous speed triple engine pushes up to 7000 rpm on the bearish level of the Ducati twin, unfolds its power in an exemplary linear manner and literally spits the British out of the hairpin bends. The chassis has become harder and more precise over the years, but still provides that portion of residual comfort that is absolutely necessary to survive here. The Speed ​​Triple offers both young and old a comfortable driver’s seat, has extensive equipment, sufficient range and recently an ABS on board. What she no longer has is the suppleness with which her predecessor went on the gas. Nevertheless, she is a worthy representative of her class in the final. Even without Japan. God save the Queen! 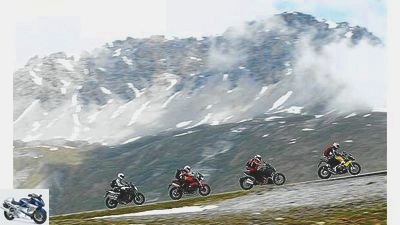 Also in 2011 the Speed ​​Triple was ahead of the pack at the Alpen Masters.

A favorite win, of course. Opponents have been grappling with the Speed ​​Triple for years. Because this combination of charak-
teristic three-cylinder, extroverted appearance and absolute suitability for everyday use is difficult to crack. Plenty of surprises in the squares. The Aprilia amazes with its anti-sweeping engine, the MV with its easy handling. The biggest surprise, however, is the driving pleasure, one thing Ducati Diavel prepared even on this run. hats off!