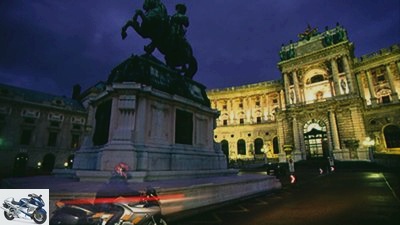 Austria’s three exciting W’s lure with a network of the smallest paths to the remote corners of the north of the country. Splendid Vienna offers a sparkling contrast with its pulsating life.

The sign “Romantic Road” would not be necessary at all. Near the city of Ybbs, things get romantic on the banks of the Danube and the slowly passing ships, even without words. The shore road circles charmingly past forests, meadows and small villages until at some point the baroque Benedictine monastery of Melk towers in front of the visor. A building that counts windows in 1888, takes up 17,500 square meters and sits enthroned like a colossus over a small town that accommodates 6,500 souls. I swing the BMW R 1100 S. on the Danube bridge near Emmersdorf and head straight for it.

Umberto Eco praised the Melk library in his novel “The Name of the Rose” as one of the most important of the Middle Ages. The rush of buses that maneuver their tourist freight through the alleys of Melk to the gates of the Benedictine monastery is correspondingly large. After a tour, I flee back across the Danube and, foregoing the tourist highlights, turn to a quieter corner: the Waldviertel, just a few kilometers further north.

Expanses, Poggstall, Ottenschlag. The road winds in pretty loops through meadows, fields and forests, from which a castle ruin protrudes every now and then. The traffic subsides until after a short time there is hardly any vehicle coming towards me.

A look at the map reveals a narrow branch east to the Dobra reservoir near Zwettl. Barely wider than the BMW luggage roll, the road winds along the Dobra. With every kilometer, the river dammed near Krumau expands and finally stretches like a fjord into a landscape that is literally overflowing with green. The Waldviertel lives up to its name here. It takes a lot of effort to look through the trees that stand like a wall on the riverbank. 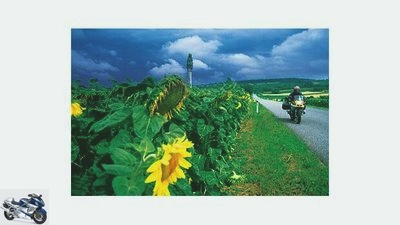 Sunflowers and a storm front – the way to Vienna is picturesque.

At Krumau I keep heading north-west and the Czech border again. The richly decorated Renaissance sgraffito houses on the town square of Gmund, which I cross a little later, still bear witness to the prosperity along the old trade routes to Bohemia. With the Iron Curtain, the Waldviertel became a dead end for decades. Today the borders are open, but the area has remained remote – ideal for discovery tours.

As I hum to the north through the forest loneliness interspersed with raised bogs, a sign warns: “Warning: state border along the road”. But of the Czech Republic, which basically begins on the left side of the road, nothing can be seen except trees and bizarre rock formations. And they look the same here and there. The road, not too wide and not too narrow, offers ideal terrain for the BMW sports tourer, who spontaneously thinks about his 98 hp and nimbly sweeps around the bends.

Through an extensive mosaic of grain fields, it goes over the plateau to the east. The forest has not played a role there for generations, which is why the name Feldviertel would seem more appropriate. Only in Raabs an der Thaya does the wildly romantic image that is associated with the Waldviertel apply again. The river has dug its way into the landscape up to 150 meters deep. Rugged rocks emerge on which Raabs Castle sticks like an eagle’s nest. In the direction of Drosendorf the road follows the richly winding river loops, leads past unspoilt forest slopes, jagged rocks and untouched alluvial forests. 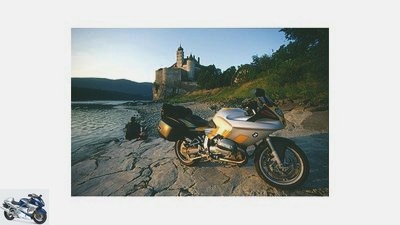 Roads to Vienna – Schonbuhel Castle near Melk on the Danube.

The region of the three “W” offers motorcycle travelers a charming mix of metropolitan flair, nature and driving pleasure. City-shy visitors can even retreat to the countryside to spend the night. 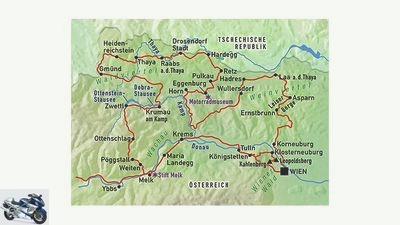 getting there
The fastest way is via the A 8 Munich – Salzburg and then via the A 1 to Vienna.

Worth seeing
In addition to the Hofburg, Prater, Schonbrunn and Co. Vienna also offers some “insider tips” for friends of the extraordinary. For example, the aforementioned Federal Pathological-Anatomical Museum in the 9th district, Spitalgasse 2, telephone 0043/1/40686722, Internet: www.pathomus.or.at. Or the Vienna Crime Museum in the 2nd district, Grobe Spiegelgasse 24, phone 0043/1/2144678, as well as the central cemetery or the cemetery of the nameless (www.friedhoefe.wien.at). Perhaps the most beautiful Viennese coffee house is the listed 19th century Cafe Sperl, 6th district, Gumpendorferstrabe 11, Internet: www.cafesperl.at. In the surrounding area, the motorcycle museum in Eggenburg, Museumsgasse 6, with 320 historical exhibits, including the world’s most comprehensive Puch collection. Telephone and fax 0043/2984/2151, Internet: www.motorradmuseum.at.

literature
For Vienna, we recommend the 288-page volume “Vienna and Surroundings” by Reise Know-How for 10.50 euros. The 108-page volume “Vienna” from the “on tour” series by Polyglott Verlag with a city map for 7.95 euros is also practical. The HB-Bildatlas Nr. 199 “Niederosterreich, Wachau” offers impressions of the surroundings for 8.50 euros, further tips for motorcycle tours from the band “Osterreich” from the Edition Unterwegs, Motorbuch Verlag, for 16 euros. Maps: General map Austria Extra, sheet 1, “Lower Austria, Vienna, Upper Austria, Northern Burgenland” in 1: 200000 for 7.50 euros. 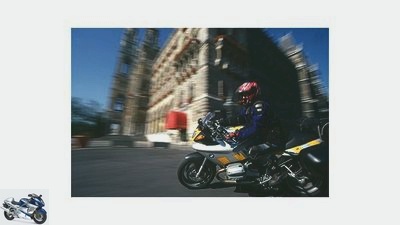 Out and about in Vienna.

After Hardegg I dive through a moss-covered city wall and climb a castle that offers a view over the Thaya to the Czech Republic. From the Hardegger Warte on the opposite side, the east eyed the west with suspicion during the time of the Iron Curtain. Today only a few hikers happily wave over. Despite the “central European location” after the Czech Republic joined the EU, nature is still almost untouched.

Two corners further at Retz, the first isolated vines announce the Weinviertel. But the viticulture is not really getting into play; instead of vines, corn and grain fields are spreading. On soils that are among the most productive in Austria, the grapes have a lot of competition.

Dense, extractive, fat, bulky and chubby, powerful and robust … “Hans Burger in Wullersdorf has an almost inexhaustible vocabulary when it comes to describing wines. Behind me is an extensive bend through the Kamptal, and the lecture by the passionate winegrower arouses appetites. So I look for a neighborhood nearby, not only enjoy the Gruner Veltliner, which is typical of the region, but also take a look at Burger’s wine cellar. As inconspicuous as a garage door from the outside, the entrance leads 200 meters into the belly of the earth. A widespread labyrinth of stairs, corridors and chambers opens up in the glow of petroleum lamps.

Back on the BMW, the longest cellar lane in Austria reveals itself a few kilometers further. The entrances to the wine cellars are lined up like rustic single-family houses. Occasionally one or the other with names like “Fritzlkeller”, “Sauschadel-Koller” and “Keller der silent Zecher” invites you to eat – and puts the motorcyclist’s abstinence to a severe test. 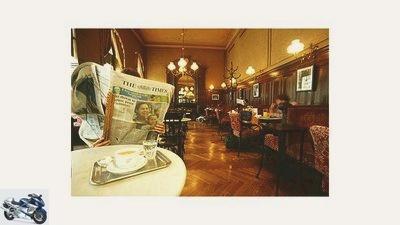 Only the prompt U-turn saves the day for speeding around corners. Via Laa an der Thaya, I roar to the Leiser Mountains, which protrude from the plain, enticingly from afar. Half an hour of cornering frenzy on the almost empty streets around the 500 meter high Buschberg, then it’s straight to Vienna.

Traffic jams, trams, horse and carriage drivers – the hustle and bustle of the center of the state capital initially completely overwhelms my ability to react. An almost inevitable shock after the seclusion in the Waldviertel and Weinviertel. I carefully maneuver the BMW past tin columns, paying attention to Japanese tour groups who suddenly rush onto the lane and the tram rails framed by treacherous little walls. time for a coffee.

The charm of a real Viennese coffee house welcomes me to Cafe Sperl, with furniture from the turn of the century and liveried porter at the ticket office. Despite my motorcycle outfit, I am greeted by a warm “Grub Gott, gnaaa Frau” before I sink into purple upholstered chairs next to the pastries presented in the center. The background music reverberating on the high stucco ceilings forms a soft murmur and rustling newspaper. The only thing is that there doesn’t seem to be any coffee in the coffee house. My order clearly irritates the cream. There would be the Melange, the Little and the Big Brown, the Extended, the Spritzten Mocha, the Capuchin, the Einspanner, the Franciscan … It takes time to internalize the basic terms of the Viennese coffee house language. When I finally tried various coffee specialties and ate the range of homemade pastries, it was already dark over the city. And with it the traffic. You can now travel unhindered through magnificent Vienna. Parliament, Hofburg, Karlskirche, Hochstrahlbrunnen, Hoftheater – the brightly lit monumental buildings are lined up close together. As soon as a traffic light turns red, the BMW brake electronics hum like an Airbus. Classic sounds from the direction of the opera mix with this, and rap music is played diagonally across the street, mixed with the chants of a karaoke bar, the clacking of the skaters and the clatter of the horses’ hooves. Mountain bikes whiz past, come out of the night and disappear again into the dark.

The next morning the discovery fever doesn’t stop. St. Stephen’s Cathedral, Schonbrunn, Prater with Ferris wheel – of course. But then it’s time for the other Vienna with a special kind of bizarre tour. For example, to the Federal Pathological-Anatomical Museum in the Narrenturm. The five-storey building – an institution for the mentally ill until 1860 – welcomes visitors with a horror cabinet of human abysses comprising 50,000 exhibits. All around, two-headed embryos soaked in formaldehyde and tuberculous lungs, crooked skeletons and lifelike wax replicas of individual parts of the body that have been horribly disfigured by eczema, tumors and inflammation are piled up. I examine an “esophagus with swallowed part of a dental prosthesis”, study the “appendix stone from a gallbladder of a 78-year-old woman” and finally look for the consideration of the “undigested stomach contents of a psychiatric patient who, in addition to horsehair, even ate the contents of his mattress”.

The graves are a little more agreeable: Central Cemetery, St. Marx Cemetery and the Cemetery of the Nameless – eerily beautiful necropolises in which hordes of foreign and local hikers apparently spend pleasant hours. Behind the sausage booths at the central cemetery I come across the pompous graves of honor of Brahms, Schubert, Strauss, Beethoven and Falco, step into accessible family tombs, stumble over weathered tombstones in jungle-like scrub and discover grave monuments that are reminiscent of small Gothic cathedrals. Then I visit Mozart at the Biedermeier cemetery St. Marx, whose bones, unlike “Rock me Amadeus” Falco, ended up in the anonymous mass grave rather than in honor. The unknown dead in the Nameless Cemetery were treated with more dignity. “Drowned by someone else’s hand on June 1, 1904 at the age of 11” reads on a grave decorated with flowers and a wooden cross. Or: “Sepperl, one day old, found in a shoebox on the banks of the Danube”.

Now it’s enough, everything thirsts for life and nature again. Nussdorf, Grinzing, Neustift am Walde – the city disappears in the rear-view mirror and I dive into the vine-covered southern slopes of the Vienna Woods. One wine tavern is crowded with the next, and the partly paved, narrow mountain road leads into the mountains. Shady beech forests lead to Kahlenberg and Leopoldsberg, down to Klosterneuburg and again up into the Vienna Woods to the Tulbinger Kogel. The 1100 is in its element again.

At Tulln I cross the Danube and drive on the expressway to Krems. The sun is still high enough to slide one last swerve through the Dunkelsteiner forest. Fantastically winding streets lead in rapid alternation over mountains and valleys, touching the monasteries of Gottweig and Maria Landegg. In the end I am standing in front of the most impressive of all: Melk. Exhausted, I fall into the street cafe and, clever from my stay in Vienna, order a professional horse-drawn carriage. The waiter looks at my German license plate and only nods briefly. I mean it was appreciative.