The 1125 CR is the sporty roadster – more precisely the Cafe Racer – of the manufacturer of Wisconsin, directly resulting from the sporty 1125 R of the mark, the fairing in less and a threatening look in addition. 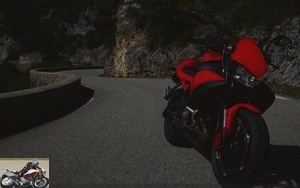 Developed for the first time by Rotax and not by Harley-Davidson (but followed in its manufacture by Eric Buell), the Helicon is the first liquid-cooled powertrain of the brand.

The 1125 CR surprises first with its two huge side scoops which give it all its personality, true force-feeders for the enormous V-Twin developing 146 horsepower and 111 Nm of torque for a featherweight of only 170 kilos dry. With a reduced wheelbase of 1385 mm, the 1125 CR is particularly compact and hints at brute force. Then we notice the huge frame which in this case also acts as a reservoir. Finally, we note the huge 375mm brake disc along the rim and the imposing brake calipers colored in red. Exhaust under the swingarm extended by 5mm for the occasion, belt transmission, shorter secondary transmission ratios to promote pickups complete the panorama of a motorcycle like no other: a big engine like that for a small weight and brakes? What better definition for a Cafe Racer? But the French version must be satisfied with a 106 horsepower…. then castrated ?

The dashboard falls under the eye revealing a real on-board computer with partial double trip, clock, average and instantaneous consumption, gear engaged, crutch extended, mileage before service and adjustment of the lighting intensity of the meter.
Everything turns out to be readable despite the black LEDs on an orange background. 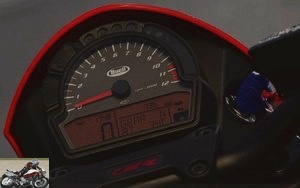 The mirrors provide a good view, while their adjustment is done by pressing directly on the internal mirror.

The feet are just touching the tip for the 1.70m rider, despite a low seat at 775mm but quite wide. Small build to abstain. The position appears elevated with fairly raised feet and a fairly close hand-to-foot triangle with a slight tilt to the front. The rather wide frame spreads the knees but without excess allowing to tighten the motorcycle well. The overall impression felt is instantly imposing, wild. Riding the 1125 CR rather than sitting on it. 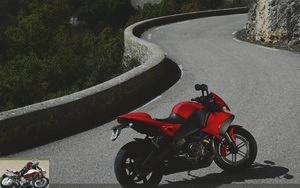 The key on the right side of the meter turns. The double exhaust placed under the engine gives a low growl.

The first activated, the 1125 CR starts instantly and the handle needs to be carefully dosed. The box is easy and precise straight away.

The 1,125cc V-Twin makes itself felt at all times. Bumping vigorously below 2500 rpm, the bike asks to stay in the revs and at least in 2nd gear. On the other hand, the maneuverability is there. With a short caster angle of 21 °, it weaves its way around without difficulty and turns like a bicycle at low speed. Its 170 kilos make it easier to maneuver at low speed.

She doesn’t like traffic jams, in which case you can quickly feel the heat rising from the engine block.. 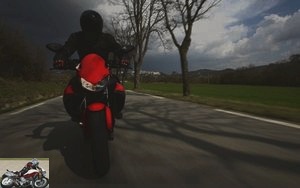 The 1125 purrs on last gear and literally flies off to attack the freeway. The lack of protection causes the impossible speed limit to drop quickly enough to return to a cruising rate below 140 / km / h despite the windshield. And if you really want to hang on the German track or motorway at the possible 260 km / h, the almost vertical caster angle and the short wheelbase will not give you confidence with barbaits…. The 1125 CR is not made for the highway and there is no point besides doing a weight training session. 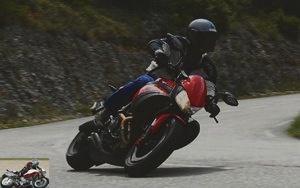 The first turns are approached with caution. The 1125 CR asks to be tamed and the measure of the beast is only taken as the sequences go. Braking, acceleration, focus on the angle, any demand for dosage, anticipation and control. There are some bikes where you can sit quietly and let yourself be guided by the bike that almost goes on its own where you want it to go. Nothing like that here. The 1125 CR is a stallion that demands to be taken in hand, tamed, tamed and managed with the whole body. The power is also so great that you barely get out of one corner when the next one jumps out. And without anticipation, the bike would happily go straight. This is where you have to grip the bike well, be mobile, work on the footrests and train the bike well with you. In fact, it’s not the bike that turns, it’s the rider who takes the bike where it needs to go. In this game, the front axle would almost tend to take a significant load off and you shouldn’t hesitate to keep the weight on the front so that the bike sticks well to the road. This is where the Pirelli Corsa III plays its role. The tires heat up easily and quickly and adhere perfectly. Suddenly, the bike takes an angle, very quickly and in complete safety. The engine has enormous torque, which you can feel even more when decelerating. It’s a big V-Twin that lets it know, especially when entering a corner. It is better to be in the right gear before, because the descent at the last moment of a gear can hold some surprises even with the usual heavy throttle.

Suddenly, the standard rider will almost tend at first to stay in 3rd gear which allows almost all speeds (and only breaks at 180 km / h) and pushes hard from 4,000 rpm. Because from this revs, the 1125 sends or actually propels its rider forward and continues to push for the next 5,000 rpm. Going to the switch is useless, as long as the next turn is already there.

As soon as you understand how it works, driving the 1125 CR becomes exhilarating. It is no longer a matter of mere driving pleasure, but the exhilaration of taming a motorcycle with character that will therefore go without surprise where you want to go…. but will not give you any respite if you relax your attention…. a thoroughbred never quite tamed …. 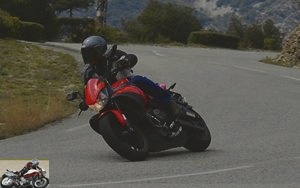 The rear brake is a good retarder, which puts the bike perfectly when entering a bend. The front brake also has extraordinary bite that makes braking hard, unless you get caught with just two fingers. And if you grip the handle vigorously, the overall impression is like hitting a wall. The feeling is always excellent and allows you to measure everything with a little experience and habit…. in the dry. In the wet, this can hold surprises. In any case, the brakes require skill and experience to squeeze all the quintessential out of them without getting in the heap, especially since there is no ABS as an option. In which case, they must be among the most effective. The saddle allows good mobility. It’s not exactly comfortable, but it doesn’t cause hind end harm either. In fact, driving driven by the 1125CR requires so much energy that the driver does not at least notice badly behind even after 300 km almost non-stop. Besides that, the suspensions are rather dry; if this does not change the behavior of the motorcycle which remains safe, the rider suffers a little more and gives back his hand quite quickly. 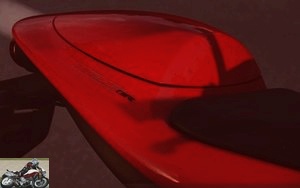 There is no storage under the saddle, just room to place a disc lock.
The "tank" (part usually occupied by the tank) being made of plastic, it is impossible to place a magnetic bag in it. At the rear, there is no passenger handle and nothing to hang anything on. The 1125CR is closer to the practicality of a sports car than a roadster.

The vibrations of the V-Twin are felt in the mirrors, often providing blurry vision, while the field of vision is good. 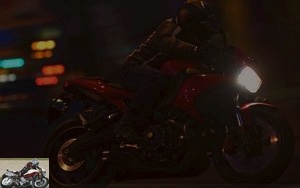 Powerful, even violent, the 1125 CR is a motorcycle at odds with current production, tending to create motorcycles that are easy to handle. The 1125 CR requires a longer or shorter adaptation time depending on the pilot’s experience already acquired, if possible on large engines. It will delight all those who are disappointed by recent motorcycles that are too easy, even without character. The 1125 CR is the opposite on all levels: engine, braking and look. She doesn’t give anything on her own. It will satisfy the rider who wants to fight with the bike and who will feel valued to have succeeded in taming it to use all the watts. And the margin is huge before we get there. And even if at € 11,795, it is in the high margin compared to the competition, the performance, the sensations and the pleasure are up to the task..