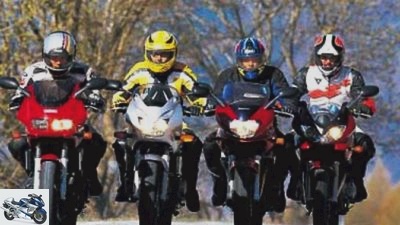 Born to be mild

Four days, 1913 kilometers, 2465 curves. Sun, fog, snow. Gravel on the passes. The new Kawasaki ZR-7 S had to prove its qualities against the established competition on a marathon stage through the Alps.

Not only is it easy to drive, it also has no serious weaknesses. Apart from the fact that the light could be improved, the handlebars could be a little wider and the shape of the tank literally offends. The all-round talent is richly equipped and also has the most powerful engine in the comparison field. All in all, this results in the mix for the subscription winner. The competition has to come up with something.

The Hornet is the ultimate fun mobile. Very powerful, petite in size without scaring off long-legged people on short trips. Unfortunately, the wide 180 mm tires at the rear spoil their uncommon handiness. The engine is annoying with vibrations, especially in the middle speed range, and the driving behavior also suffers from load changes. But in terms of equipment, the Hornet does not come close to the Fazer, but is a worthy first loser.

Your driving behavior suits the aged and good-natured engine. The new ZR-7 S shines with its inconspicuousness. Is a reliable companion without significant weak points. Apart from the miserable brakes. However, even without highlights. It has the most comfortable seating position in the comparison field and drives without any major peculiarities. It is recommended as a bike for everyone, for whom inner values ​​count more than a pompous appearance or the sporty cornering.

The fact that cheap is also bad is misleading in this case. Okay, the Bandit’s engine constantly demands revs and feels exhausted. In addition, she struggles with indifferent cornering behavior. Nevertheless, from a travel point of view, she is a good-natured companion. With acceptable wind protection and the best pillion seat in the field. Compared to the competition, however, it appears unwieldy and cumbersome. But easy going is half the battle.