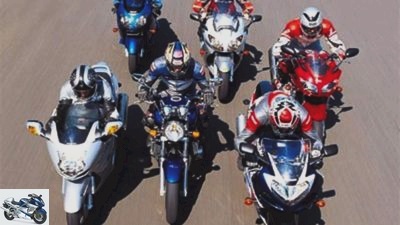 The six most powerful and powerful four-cylinders from naked bikes to super sports cars in direct comparison. Which one sells his bombastic achievement best?

The Honda XX is like a good wine: the sports tourer has improved in quality over the years. Like the Yamaha FJR 1300, it presents itself with a modern mixture preparation in addition to G-Kat and SLS, its performance is still more than sufficient. The chassis offers a good compromise between handiness, stability and comfort, the steering precision is simply inspiring. A standard ABS would be the famous icing on the cake for the XX.

The most complete, the most versatile motorcycle wins this comparison. The FJR 1300 impresses with its powerful four-cylinder, which should, however, be a little quieter. With its performance and good chassis, it penetrates into areas that were previously reserved for the sports group. On the wish list for the next model year are sixth gear and ABS ?? In these points, the tourer competition from Bavaria is still ahead.

Distinctive details in the points evaluation briefly and concisely explained.

The most impressive: the Suzuki GSX-R engine. Incredibly spontaneous and yet controllable performance in all situations, closely followed by the aggressive Kawasaki and the calm, beefy character of the Yamaha FJR 1300. Stability in corners Here, too, the very stiff chassis of the GSX-R 1000 sets the standard, just before the very well balanced Honda CBR 1100 XX. Surprisingly good: the tourer Yamaha FJR 1300Delay / manual force Suspect reference: the Yamaha FZS 1000 Fazer, both in terms of the deceleration values ​​and the controllability of its front and rear brake systems. Long-range / low beam The Kawasaki ZX-12 R currently has the best series headlights in the world The open-space headlights of the Suzuki GSX 1400, on the other hand, are only average. Theoretical range Driving instead of refueling: Thanks to its relatively economical engine and a 25-liter tank, the Yamaha FJR 1300 pulls everyone away on long journeys the pillion. Above average for a sports tourer: the Honda CBR 1100 XX. Cutbacks, however, with the super sports car Suzuki GSX-R 1000.Windshield Exemplary: the electrically adjustable windshield of the Yamaha FJR 1300. Also great: the windshield on the lightning-fast Kawasaki ZX-12 R and the Honda. Consumption The Yamaha FZS 1000 Fazer equipped with constant pressure carburetors is the most economical the Suzuki 1400s supplied by manifold injection are very thirsty. Inspection costs The two Yamahas with unrivaled low inspection guide values ​​and 10,000-kilometer intervals. This makes the customer happy and makes the Yamaha mechanic sweat.

Always in a circle? What’s the point? Well, the tester felt dizzy? and loads of realizations. Because in the circular path (diameter 46 meters) MOTORRAD tests a large number of criteria. These include the grip of the initial tires and the tendency to pitch when braking in an inclined position, which can only be tested here in a comparable and relatively safe manner. Two bumps act as an additional hurdle, which place high demands on the stability of the chassis and the self-damping of the tires at great lean angles. The same applies to the circular path: The maximum speed driven is documented (see box), but only the subjective impressions of the testers are included in the evaluation, also collected on the test route covering several hundred kilometers, on which the freedom from leaning is also checked -12 R: Respect, the strongest production motorcycle in the world has good stability on an undulating track, the footpegs only come into contact with an extremely lean angle, even when driving with a passenger. Hardly any tendency to stand up when braking in an inclined position. Honda CBR 1100 XX: Great performance, the excellently balanced XX drives very stable and gives its driver a lot of feedback, its stiff chassis clearly tends towards supersport. The long nipples on the notches restrict the lean angle somewhat? but can be easily removed if necessary. Good choice of first tire: Dunlop D 205 in special specification. Hardly any tendency to erect, good self-damping and enough grip reserves. Suzuki GSX 1400: Likewise a lot of grip and self-damping thanks to Bridgestone BT 020, pegs, side and main stands sometimes hit hard in left turns. Good cornering stability, but load change reactions interfere. Suzuki GSX-R 1000: Appropriately fast, very stable and neutral, even with easy-to-grip Bridgestone BT 010 tires, the freedom from lean angles cannot be explored, no parts touching down. Yamaha FZS 1000 Fazer: Good stability, even with load changes and waves, but notches, stands and exhaust are positioned at maximum inclination. Yamaha FJR 1300: Good cornering stability on waves, touches down good-naturedly with notches and side stands, but surprisingly high cornering speeds are possible.

Another important and safety-relevant test criterion: the brakes. In order to create the same conditions for everyone, the tests are carried out on a cordoned-off test site. The most important criteria: braking stability and the braking deceleration that can be achieved with both brakes, documented by the special VZM 300 recording device, as well as by a light barrier and distance measurement. MOTORRAD calculates the average braking deceleration and the braking distance from 100 km / h (see also the table below). Further questions: How high are the manual forces required? Does the brake system tend to fade under heavy use? When the brake system of the Honda CBR 1100 XX is extremely decelerated, it does not come close to the braking distances of the competitors. The reason: The testers lacked the last ounce of feeling for the locking limit of the front wheel. In addition, metering the brake with the foot is more difficult than with conventional systems. With the Kawasaki ZX-12 R, the controllability and effect of the front brake are at a very high level, but the rear reacts slightly restlessly when the brakes are fully applied, even if at least without violent stamping. The rear stoppers act bluntly and are difficult to dose.What also applies to the front stoppers of the Suzuki GSX-R 1000 at least at the beginning of braking, the 1000s only decelerate well and stably with increasing manual force. The rear wheel rises slightly and, due to the use of the rear brake, tends to stamp. The Suzuki GSX 1400 is state-of-the-art: Its brake system requires comparatively higher manual forces, but responds fine and delays the front like very good at the back. The front wheel has an occasional tendency to stamp. Such tendencies are alien to the Yamaha FZS 1000 Fazer. It shines with excellent controllability of the front and rear brakes, fantastic deceleration values ​​and remains stable on course. Somewhat irritating: the flexible handlebar mounting that allows the handlebars to tilt forward slightly. Also good: the presentation of the weighty Yamaha FJR 1300. However, its front brake system cannot be adjusted as well as the four-piston calipers of the Fazer, which are similar in construction, and a relatively high level of manual force is required.

The greatest plus of the Kawasaki: its elemental engine that produces abundant power in all situations. The world’s most powerful production motorcycle is not as polished and fine as the Honda, it requires an active, hands-on driver. Nevertheless, its somewhat rustic character is pleasing. Which is not least due to the good chassis, a great mix of comfort and stability, the top brakes and the above-average suitability for everyday use.

On the racetrack, she drives everything into the ground. And you can also find out why on the country road. With the GSX-R 1000, Suzuki achieved an ingenious synthesis of an almost unshakably stable chassis and an ultra-potent engine combined with drivability. This sets the standard for super athletes. This uncompromising attitude leads to compromises in terms of comfort, but the Suzuki impresses with its good everyday suitability.

Suzuki’s high-torque bundle of joy doesn’t care about top sporting performance, but brings you back to the essentials: the enjoyment of consistently lively motorcycling ?? without stressing you in the least. For a 260 kilogram heavy chunk, the GSX 1400 has really extraordinary handling, plus a well-tuned chassis with sufficient reserves and a gripping braking system.

The Fazer combines the power of a super athlete with good all-round properties. Its bearish and smooth-running engine, derived from the R1, convinces in this comparison with the best pull-through values ​​and with low consumption. Their talents would be even more effective if Yamaha showed a little more attention to detail. Above all, a tighter adjustment of the rear shock absorber, a more comfortable passenger seat and a significantly improved wind protection would be desirable.

Of great importance and associated with a lot of effort: the handling test. Important questions are: Does the motorcycle steer precisely? How easy is it to change lean angles and direction? How high is the effort? And what about the pillion quality? The test team checks all motorcycles during a precisely defined test lap on the Swabian Alb, which has everything that the roads have in store in normal motorcycling life, from tight bends to slow and brisk alternating curves to fast, wide radii. As a counterpart to the test track, to round off and check the results, MOTORRAD then checks the handling on a closed-off track with two different courses: a wide, slow and a narrow, fast slalom. The times and speeds listed below provide a basic guide to the handling properties, but the only thing that counts for the scoring is the subjective impression of the test team that was won on the test lap. Honda CBR 1100 XX: It does require a strong steering input, But it drives very precisely, neutral and stable. Even with two people, the Honda delivers an impeccable and accurate performance, only the hard load changes in slow passages take getting used to. The mighty Kawasaki ZX-12 R also requires high steering forces, reinforced by its over-wide 200 mm rear tires, but compensates for this disadvantage with its powerful engine. In slow slalom, i.e. long S-curves, the ZX-12 R makes a relatively tight curve at the turning point. The only disturbing effect at such low speeds is its hard load changes. Long wheelbase, maximum caster and high weight: Nevertheless, in this comparison, the Suzuki GSX 1400 is the handiest? also for two. Thanks to its stable fork, it shines with good steering precision, but noticeable tilting movements around the longitudinal axis occur with hard changes in load and lean angle, both in fast and slow arcs. The thoroughbred super athlete Suzuki GSX-R 1000, on the other hand, does not turn out to be a handling star, changing course requires a lot of strength. On the other hand, it behaves with unsurpassed stability and accuracy even when changing lean angles, even in two-person operation. The Yamaha FZS 1000 Fazer conveys an indirect steering feel when changing lean angles because of the rubber-mounted handlebar, and it also compresses a lot. In twos, the Fazer drives too tail-heavy, despite the maximum raised rear, which reduces the accuracy and increases the steering force beyond measure. Her touring sister, the Yamaha FJR 1300, on the other hand, surprises with a good, sufficiently tight set-up; Nothing changes about that even with two people, you practically don’t feel the front passenger at all. Only the lean angle suffers slightly from the additional weight, the heavy Yamaha easily touches down with the notches and the main stand.