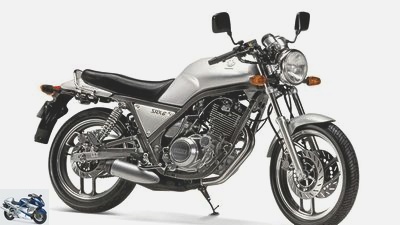 The story of a misjudgment

The Yamaha SRX 600 – perhaps the most beautiful series-production street-level single-cylinder machine of modern times – was eagerly awaited, enthusiastically received – and then not bought. The story of a misjudgment.

M.In the mid-1980s, many motorcyclists were fed up with the arms race. The six-cylinder stunts were practically history, Harleys suddenly became reliable and sought-after, and sporty street singles were celebrating a renaissance. The purists among the two-wheel fans remembered classics such as BSA Gold Star, Ducati 450 Desmo or Velocette Thruxton and reacted euphorically when the first reports about the SRX6 (type 1JK), which had been sold in Japan since 1985, made the rounds. For the domestic market, which has always been enthusiastic about classics, the Yamaha designers rummaged around in the in-house kit and discovered many useful parts there: including the engine of the Enduro XT 600, the 18-inch wheels and brakes of the RD 350 and the struts of the XJ 900 The only really new thing about the SRX6 were the tank and frame, the exhaust and a few attachments. But it was precisely the clever combination of the few new parts that turned the motorcycle gourmets’ heads and triggered a want-to-have reflex.

Cult bike Yamaha SRX 600
The story of a misjudgment

Also cuts a fine figure from above – the Yamaha SXR 600.

After all, the pillion pegs that were previously mounted directly on the swing arm were given frame-proof brackets, but they turned out to be quite coarse and not at all compatible with the rest. At 7120 marks, the price at the German premiere in 1986 was actually a bit lower than in Japan, but even so, the importer Mitsui had to learn painfully that there can be a big difference between “finding it beautiful” and “buying it beautifully”.

In the first year only 920 units found buyers who were enthusiastic about the great handiness, the powerful engine and the excellent brakes. In 1988 the number fell to 374 new machine customers. For comparison: The SR 500 sold around 1,500 times a year. Yamaha pulled the emergency brake, the last SRX 600 copies were sold for well below 6,000 marks in 1990, and the successor model SRX 600 E (type 3SX), which finally appeared in the same year with an electric starter and new chassis, was no longer officially imported.

Nicely done: The engine comes from the Yamaha Enduro XT 600, has been drilled out from 595 to 608 cm³ and comes in silver instead of black.

Market situation
The range of types 1XL / 1XM is very clear, the prices are (still) surprisingly moderate. With a little luck there are ready-to-drive handicraft stalls for around 1000 euros; Ordinary used machines in largely original condition are traded from just under 2000 euros. The (never officially imported) successor model SRX 600 E (3SX) is much rarer and not available for less than 3500 euros.