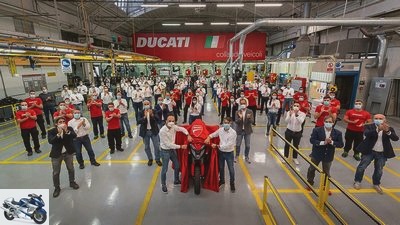 1/5
Production of the Multistrada V4 has started at the Ducati plant in Borgo Panigale. All details about the new engine will be announced on October 15, 2020. 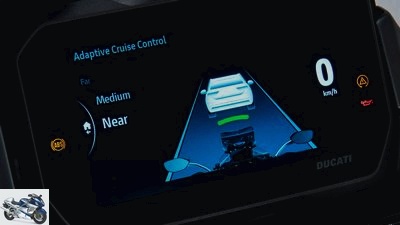 2/5
The Multistrada V4 will be the first production motorcycle with the presented radar system. 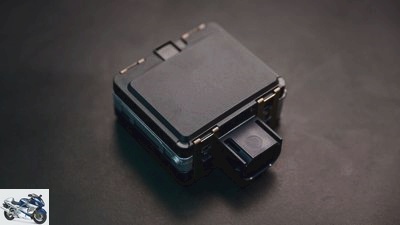 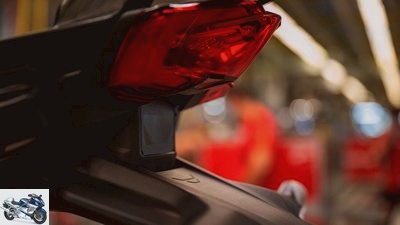 4/5
At the back, the sensor box is attached under the taillight and supports a kind of blind spot warner with the data. 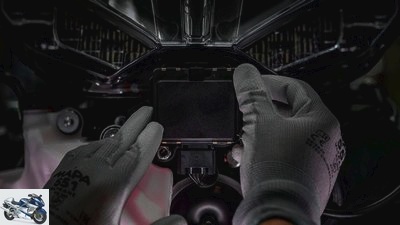 5/5
At the front, the box sits under the nose of the fairing. The function of the cruise control is based on their evaluations.

Patented by Ducati and finally developed with Bosch – distance cruise control and blind spot warning are a world first for motorcycles. The system is being used for the first time in the new Ducati Multistrada 1200 V4.

The Multistrada 1200 V4 is the first motorcycle to roll with a distance radar. The system’s sensors are installed in the front of the fairing nose and in the back under the taillight. The radar sensors continuously scan the environment and detect moving objects. The sensor in the front supports the ACC (Adaptive Cruise Control) cruise control function in four stages: The driver can choose the distance he wants to keep from the vehicle in front and the system then ensures that this distance is maintained. To do this, the system adjusts the engine output of the Multistrada V4 and, if necessary, brakes the bike – up to 0.5g if necessary. 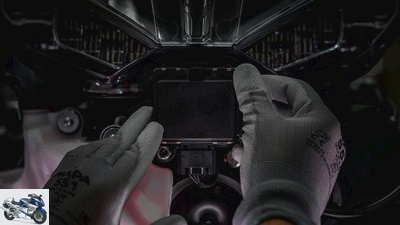 The radar sensor for the function of the distance cruise control is located in the front of the fairing. 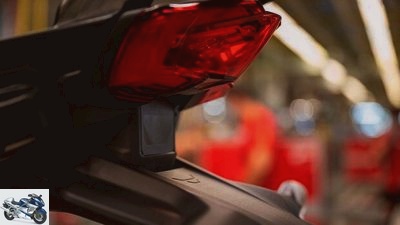 The rear sensor is located under the rear light.

Blind spot assistant thanks to sensors at the rear

The sensors at the rear serve more for safety than comfort and enable the Ducati Multistrada 1200 V4 to offer an optional blind spot assistant from Ducati “BSD system (Blind Spot Detection)” called. If the sensors detect a moving object at the rear of the Multistrada, a signal lights up in the two mirrors of the motorcycle and warns the driver. The system can also signal the approach of vehicles at high speed from behind. As in the automotive sector, it is intended to make lane changes safer. The Polytechnic University of Milan was also involved in developing this role.

MOTORRAD editor-in-chief Michael Pfeiffer on the latest development at Ducati with the Multistrada-V4 (from the editorial by MOTORCYCLE 22/2020; will be released on October 9th): “Of course, nobody needs a cruise control system on a motorcycle. Because it’s on the right anyway, it’s called the throttle and does what I want. However, I have already caught myself in a certain alpine country on the highway like to cheat the greedy speed controllers by setting the said system, also known as cruise control, to 121 km / h. So that you don’t drive too fast by mistake, which happens when you sneeze on a reasonably powerful machine. And I have hay fever. Ducati is now coming onto the market with a significantly refined cruise control. Thanks to the radar eye, it recognizes whether someone is driving in front of you and regulates the speed accordingly. In other words: The 118 km / h rabbit feet in that country are no longer a regulatory nuisance, but simply recognized automatically. Then the Duc slows down – only to accelerate again to a whopping 121 km / h after it disappears. The clever Italians, however, thought further and patented a radar eye for the rear area and developed it for series production together with Bosch. This eye recognizes everything that is happening behind you: for example close-up drivers, cars and motorcycles in the blind spot of the mirror or dangerous right overtaking people. Very good and compliments to Ducati. In the meantime, you can do a lot more in Bologna than just build fast and beautiful motorcycles. In the meantime they are also setting standards in terms of technology. And thus to the top when it comes to high-tech.