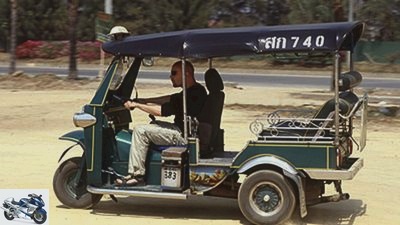 Thailand’s tuk-tuk drivers and their companions have to survive in the cities’ traffic mega-melts every day. MOTORRAD editor Rolf Henniges tried out how such a moto rickshaw drives in Chiang Mai

The development of the rickshaws, originally from India, includes four
Levels: The hand-drawn cart replaced the cycle rickshaw at the end of the 1930s. The first auto rickshaws, known as tuk-tuks or bajaj, appeared in the mid-sixties. In the course of this motorization, the mostly self-built moto rickshaws (see photos) were added. These are sawn-up mopeds and motorcycles with hair-raising constructions for passenger transport and sometimes with a negative steering head angle. Both processing and
Condition are often creepy and anything but
Inspiring confidence. However, the experience factor during a trip is extremely high.