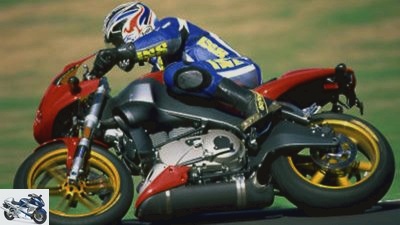 Buell strikes. When it comes to displacement. Firebolt and Lightning are now also available with a good 1200 cm3. They thunder and flash even more violently?

Buell is cool. No, for once we are not talking about one of the radical mixtures of rustic US mechanical engineering and sexy outfit, but Erik.

Erik F. Buell himself. Company founder and chief engineer. When the family man climbs the stage, grabs the microphone and electric guitar and together with two employees
rocks off, you immediately believe that he likes
Would have become a musician. And understands why the Buell brand is like them
is. Shirt-sleeved, relaxed, self-confident. Generously ignoring 1000-point ratings and other finely balanced yardsticks. Buell are different.
Firebolt and Lightning are stashing theirs
14 liters of fuel in the aluminum profiles-
frame, the engine oil walk in the swing arm and brake at the front with a 375 millimeter disc. Directly floating in the rim and seized by an internally encompassing six-piston pliers. Sure, otherwise it would be too normal.
To ensure that the saddle will be even more enjoyable in the future, the Bueller donated not only little things such as a modified, non-slip seat cover to the new models, but also
the two-valve twin known from the XB9 sisters a displacement increase. More stroke lifts the air-cooled 45 degree-
V-engine to 1202 cm3, feed comes from the injection system with 49er individual throttle valve. A flap is now also working at the rear, namely in the muffler: it modulates the there depending on the position of the throttle grip and the engine speed
Exhaust gas flow. Let the Langhuber forward
especially in the middle speed range even more punch over the ?? reinforced ?? Deliver timing belt to the rear wheel. The Americans promise a maximum of 101 hp and 110 Nm. What is believable, so emphatically, as the surge of power and torque rushes over the dry 179 kilogram Buell. At least between 2500 and a good 7000 rpm. There is a tremendous rumble underneath and the limiter cuts off the ignition current above.
At the presentation site, Elkhart Lake Race Track near Milwaukee /
USA, the latter gets quite busy. Whether bellowing around the next bend or on the long straight, the needle on the tachometer warns you to change gears far too often, which forces a number of extra gear changes in narrow passages. In view of the extremely stiff clutch and the gnarled, inexact gearshift, no real pleasure.
The Firebolt prepares this for its driver in a long 180-degree curve that is passed with a lot of flavor. Nothing wobbles there ?? the fire bolt pulls through unmoved, neatly keeping course. And can it be captured precisely before the subsequent chicane? as long as the pilot is fearlessly faced with a tendency towards slight hindquarters. The extremely compact chassis geometry and the snappy design of the front stop allow the short rear end to come across or up when braking hard. This is fun. The end of fun is only when you are into things
Line choice has to correct unforeseen times. Then the XB12R suddenly becomes stubborn, stands up, wants to go very wide arcs. This is partly due to the unsuitable first tires Dunlop
D 207 F. Alternative rubbers can do better, as cross checks have already shown with the XB9R. So there is only the tip to simply tear off the pelts, because who always drives round?
A tip that can be transferred one-to-one to the naked sister model Lightning XB12S. She has to prove herself on a tricky handling course in Elkhart Lake. Curves without ceasing, excessive, sloping, wavy. The full program. No problem for the Lightning, like the Firebolt with their full
adjustable and cleanly appealing spring elements fishes almost all bad things out of the asphalt. After a short acclimatization one wishes
just a little more lean angle to romp around, because the seating position almost above the fork bridge and the hearty pushing twin make you incredibly brave. Even if the crank
the tubular handlebar is not good for everyone, helps
the compact ergonomics for nimble maneuvering. Just like the mas-
sige thrust. Amazing how precise that is
archaic-looking engine reacts to commands on the throttle, great, how small
the load changes fail. And stupid,
how stubborn the Ligntning is. But what would a Buell be
Owithout little nicknames? Boring is not it? Can you see it!