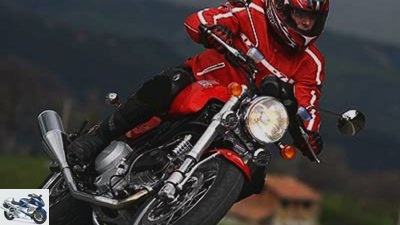 The first and the last

Inspired by the past: the GT 1000 bows to the first production Duc with a V2 engine, the GT 750 from 1971, and is the third and last model in the Sportclassic series, which combines retro style with modern technology.

W hen Ducati drove straight into the future with the GT 750, bell-bottoms, long sideburns and fat platform shoes were all the rage.

Ducati only produces 90 degree V2-
Machines that only MotoGP racers have
a V4 “Desmosedici” engine ?? with the same cylinder angle. In the 60s, however, all series Ducatis were single-cylinder. They could do little to oppose the growing competition à la Moto Guzzi V7 and Norton Commando, Triumph Trident or Honda CB 750. And the unsuccessful parallel wins of the late seventies, such as the 500 GTL, were still a long time coming.
Ducati’s massive Apollo tourer with a 1260 cm3 V4 failed as early as the mid-sixties. Only one example was built, the engine of which is now in the factory museum in Bologna. Problems with the financing came with the tires: They could not withstand a sensational 100 HP and well over 160 km / h. But Ducati’s ingenious engine designer Fabio Taglioni created the 750 V2 as a golden mean, almost as a halved V4. From today’s perspective, this engine saved the brand that was there-
was partly still owned by the state.
The GT was the first series Ducati to receive the new drive in 1971. The beautiful round engine developed 57 HP at 7700 tours and drove one overhead camshaft per cylinder via vertical shafts. And without desmodromic valve control, although Ducati is today highlighting this technology as a trademark. The pistons, measuring 80 millimeters, lay down
74.4 millimeters stroke back. Five gears were separated from the frictional connection to the right-hand rotating chain using a cable clutch. Ducati officially gave a top speed of 200 km / h; realistic it was probably a good 180. In 1972 the first copy came to Germany, now with an electric starter.
The tubular steel frame, which is open at the bottom and is derived from the 500cc GP motorcycle, held the V2 with the polished ones
Carrying aluminum lids. Unlike the 2006 GT, a main stand was installed and a conventional telescopic fork guided the front wheel. It had a flat steering head angle of 61 degrees and a mighty Ceriani fork with 38 mm stanchions for the time. Together with high-quality bronze bushings for the swing arm bearings, this led to driving stability that was unparalleled at the time.
A 19-inch model with a width of 3.25 inches rotated at the front and a 3.50 x 18-inch tire at the rear, both on Borrani high-shoulder rims. Between the two hubs there was a 1530 millimeter wheelbase. A single disc brake at the front supported the rear brake-
drum, only the last copies of the GT 750 built until 1974 received a double disc.