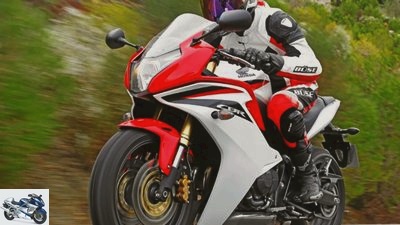 It is back – the legendary CBR 600 F. As a less extreme, everyday sportswoman, it is an inexpensive alternative to the classy but expensive racing sister CBR 600 RR. Welcome back.

Two years of vacation” – That was the name of the cult-suspicious Christmas four-parter broadcast on ZDF in 1974, based on the adventure novel by Jules Verne. A real quota racer at the time. The bestseller lasted four years CBR 600 F Holidays, before he returns home safe but more mature and mature in 2011, means going to the sales rooms of the dealers, who should be happy in view of the fact that the price of the F version has barely increased since the resignation in 2006. Iconic reputation? Sure, the status of the super sporty 600cc top model has long been lost to the CBR 600 F, which was first presented to the public in 1987, at least since its more extreme sister, the CBR 600 RR, overtook it in 2003.

So now it is back again, as an everyday, uncomplicated, sporty, yet comfortable and also inexpensive alternative to the expensive 600 super athletes. And yes, to anticipate it right away: Under the dress, the CBR 600 F is almost completely identical to the also recently presented Hornet 600, which was only a little face-lifted for 2011. Anyone who claims that the CBR is just a Hornet with full fairing is doing it still too easy. Sure, the same engine hangs in the identical aluminum backbone frame, that engine from the CBR 600 RR, year 2007, tuned for more power at medium speeds, throttled from 120 to 102 hp , short stub muffler that helps to lower the center of gravity and optimize handling. Wheels, chassis, seat? Identical. Brakes? as well.

In short: the differences between the Hornet and the CBR 600 F are essentially limited to the differently shaped, slightly smaller tank (18.4 instead of 19 liters), the fork bridge with handlebar stubs and, of course, the full fairing. The latter should not only provide wind and weather protection, but also give the CBR a sporty, elegant, timeless appearance. A fashionable double headlight was deliberately omitted. Blue, flanking position lights are supposed to ensure a cool appearance at night despite the comparatively flat solo headlight.

Whether the modern, digital cockpit with the bar segment tachometer and LCD speedometer looks cool is a matter of taste. In any case, the low-contrast tachometer does not prove to be really easy to read. On the other hand, I like the sitting position right away. The relatively high, wide and comfortably cranked handlebar stubs convey a familiar feeling to the driver, who is only bent over the tank in a discreetly sporty way, the arrangement of a tightly padded bench (seat height: 800 millimeters) and not too high mounted footrests ensures a relaxed, lasting experience comfortable sitting posture. 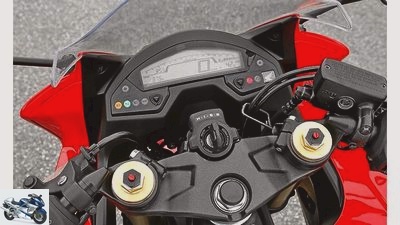 The cockpit, which is identical to the Hornet, including a moderately readable tachometer, remains a matter of taste.

Adjust the mirrors on the wide booms, which provide a perfect view of the traffic behind, and go. The four-cylinder starts spontaneously, then falls into a somewhat annoying, significantly increased idling speed, which it maintains for a long warm-up phase. The smooth-running, easy-to-dose clutch, the lever of which unfortunately cannot be adjusted, offers no surprises, the CBR starts moving in an unspectacular manner, and the gear changes in the six-speed transmission work easily and precisely. And frequent gear changes are the order of the day if things are going to move quickly. The engine depends gently, jerk-free and predictable on the gas from the idle speed, it delivers reasonably usable power from around 4000, but something like bite only from 7000 rpm. If you want to let it rip, you should be in the five-digit range if possible, with a good 13,000 tours the limiter puts an end to the hustle and bustle. Even if the high traffic density did not allow a top-speed test, the CBR did not reveal any weaknesses in straight-line stability on short trips at higher speeds.

There is also hardly anything to complain about in terms of the handiness of the 600 series, which at 211 kilograms is not a record-breaking light. The lower center of gravity, favored by the crouched posture, makes the CBR feel even easier to lean and circling through alternating curves more readily than the Hornet. The more front-heavy stance also favors the more direct steering feel and better feedback from the front wheel. So much for the subject “Hornet with full fairing” – not only does it look different, it also conveys a different driving experience. The vaunted wind protection of the shell is not exhilarating for pilots over 1.80 meters: head, shoulders and upper body from chest height are exposed to the wind pressure, but the driver is spared annoying roaring noises. 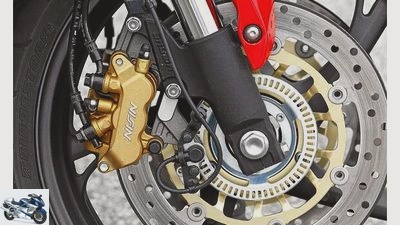 Combination brake and ABS are standard on the CBR 600 F: The three-piston calipers offer a real bite with good controllability at the same time, the ABS controls sensitively and reliably.

The route becomes more curvy, the surface partly bumpier, including mountainous passages. The series tuning of the chassis offers a good compromise between comfort and, well, firmness. Real sports fans will surely find the F too soft, comfort has to be bought at the price. The pleasantly responsive fork plunges deep when braking hard, and there is plenty of movement in the rear too when the 600 is beaten over an undulating surface. However, this seems to be the right vote for the intended use and the targeted buyers, as one wants to appeal to beginners, re-entrants and fans of sporty, everyday all-rounders. The ABS combination braking system, which is supposed to ensure a high level of safety, should also play into the hands of all of them. As already known from other Honda models, the CBS with ABS works extremely well in practice. The brake in the front wheel responds neatly when the lever is pulled lightly, requires little manual force even for sharp deceleration and offers real bite until the late, very sensitive and sovereign ABS is used. Can the front passenger cling to the holding troughs that are now integrated into the slim rear end during such maneuvers? At the latest in the first test, MOTORRAD will clarify these and other questions. One thing is already certain: in view of the convincing first impressions and the low price, we can only congratulate the CBR 600 F on its return. 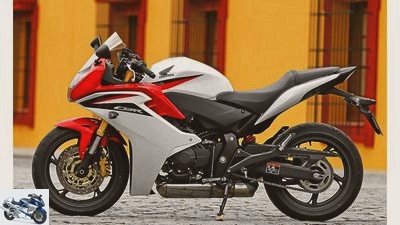 For fans of the sporty look, Honda offers a pillion seat cover.