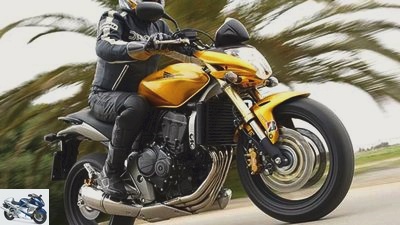 The completely renewed Honda Hornet 600 is brave, stylish and powerfully active. In addition to its classy design, the sister of the staid CBF 600 scores with state-of-the-art engine technology. And now also offers an optional ABS.

Almond blossom in the Algarve, Portugal’s south coast ?? the environment is perfect for Honda’s new hornet.

The 2007 vintage was completely turned inside out and has nothing in common with the previous lines of the 1998 series. Chic and darn brave for a Honda. The 600 is built in Italy, and it has been crisply styled by designers there.
It starts with the elegant lamp mask around the two on top of each other
arranged, pointed headlights. Above it sits the triangular cockpit with a classic rev counter and LCD speedometer. The side wings of the front section are optically continued in the angular tank and flow into a bold rear: behind the airy pillion seat, a light LED taillight rounds off the Hornet.
Striking: the extravagant stainless steel exhaust on the lower ground floor. The diagonally laid manifolds seem to lead directly into the short, stubby end pot below. In fact, they lead to a voluminous collector with two chambers via two regulated catalytic converters. Climbing curbs endangers the blunt »exhaust torpedo« on the front left. With the tradition of the sound placed high on the right-
damper breaks the current Hornet. The new four-in-one system encourages the use of tail bags or suitcases. And centers the masses around the center of gravity.
A quick press of the button and the four-cylinder comes to life. The digital engine management initially increases the idling speed to what appears to be a high 2500 rpm. Acoustically, the 599 cc in-line quad is cautious. Likewise with its appearance. The asymmetrical four-of-a-kind looks enormously compact and, viewed from the side, hardly larger than a 125cc single. It comes from the current 2007 CBR 600 RR, and was already trimmed for use in the naked bike during its development. And thoroughly. New airbox and software, different camshafts and throttle valve bodies with a diameter of 36 instead of 40 millimeters should give the super sports engine a fuller torque curve.
The compact powerhouse feels good, good all round. The Er turned out great-
The ergonomics of the 600s make it easy for little people to control them without tiring big drivers. Handlebars, rests, the cut of the tank and seat, everything fits. The driver sits perfectly integrated into the motorcycle. The pillion also has a comfortable spot, where the knee is at a pleasant angle
but on a rather thin seat pad. The likeable Streetfighter should weigh only 198 kilograms with a full tank, five less than its predecessor. The injection engine alone is lighter by that amount than the previous carburettor version.
Its coordination is successful, starting weakness or performance drops seem alien to the ultra-short stroke. Already at 3000 rpm it rolls nice and smooth, from 5000 more vehement and from 8000 fiery. At medium speeds, tingling vibrations creep into the rubber grips and footrests. The 67 pistons only cover a stroke of 42.5 millimeters. Immensely easy to turn, completely effortlessly, the four-cylinder storms into five-digit speeds. Only after 12,000 tours are there a peak power of 102 hp, five hp more than the old engine.
Perhaps the injector is already too directly on the gas, because it changes load quite a bit and takes gas commands hard from overrun. The gears snap exactly, even if the transmission feels a bit gritty. Annoying: the hand lever of the flawless clutch is not adjustable in reach. Gasoline consumption should be five percent lower than the previous model. In addition, the steel tank, which has been enlarged by two to 19 liters, increases the range. Mammoth stages can come on this good-natured species.
Meanwhile it is raining, which also happens in spring in the Algarve. What counts now is absolute trust and good feedback from the motorcycle. Hornet can convey both. Bridgestone BT 012 with special code »J« rotate on new, lighter five-spoke cast wheels. You remain liable even under difficult conditions. The Hornet can easily change direction without ever getting nervous: handy, but not overhanded. New in 2007: aluminum as the material for the swing arm and frame, which integrates the engine in a fully supporting manner. In fast bends on dry roads, the 600 is stable and accurate. And is blessed with great freedom of lean angle.
The non-adjustable upside-down fork carefully follows the asphalt relief. The directly hinged shock absorber acts tightly and has a full damping effect. It digests interfering impulses in short succession only moderately to petulantly. No, this 600 series should not be a comfort litter. That’s why Honda has CBF in its program. But in terms of safety, the new Hornet can easily compete with its good sister thanks to its great ABS. It regulates sensitively, really only when it really matters, and barely noticeably pulsating.
In the five kilogram heavier ABS version, three- instead of double-piston floating calipers delay the front, and the brake control is great. For the 700 Euro surcharge there is not only the ABS, but also a composite brake system: the foot pedal operates the rear stopper and the middle brake piston at the front right. A safety plus, especially since the ABS-free rear brake tends to lock up early.
The Hornet 600 has found more than 156,000 buyers across Europe since 1998 and was the continent’s best-selling motorcycle from 2001 to 2003. As of 2004 there were still around 46,000 copies plus the same number of CBF 600. Especially in Germany, the ABS-Hornet should now give new impulses. But the higher engine power could become a problem: This means that the 600 falls out of the 98 hp insurance class, which can mean an extra premium of several hundred euros a year. And Honda only offers a 34 hp throttle kit. It would be a shame if the new one were less popular in Germany than in southern Europe.