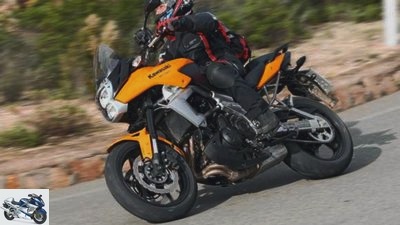 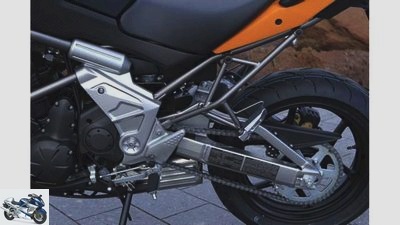 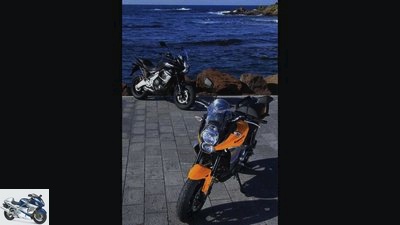 2/16
Whether black or yellow, the Versys has an eye-catching design. 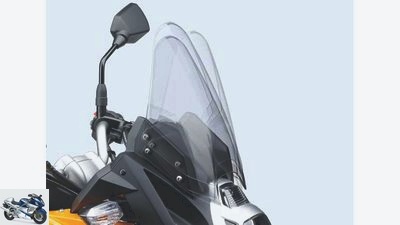 3/16
New: the slightly larger windshield can be adjusted in three positions. 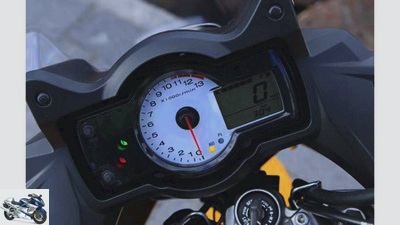 4/16
Clearly designed cockpit with all the information that makes life easier. 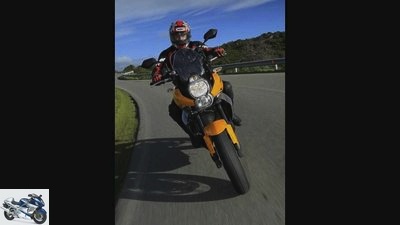 5/16
More safety: New headlights for better illumination, the indicators are positioned so that they can be seen. 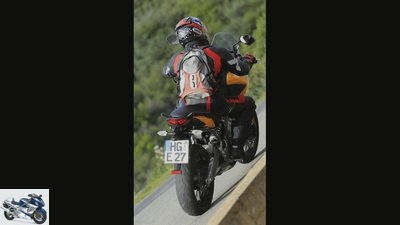 6/16
New design: the taillight and the rear mud flap. 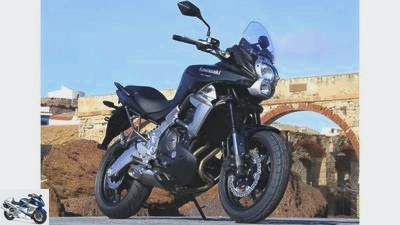 7/16
The Versys has not only improved in terms of security, the design has also been overhauled in some areas. 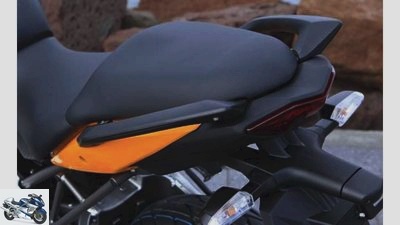 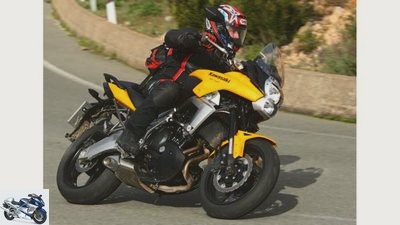 9/16
A travel-friendly seating position and weightless steering behavior are not only suitable for beginners. 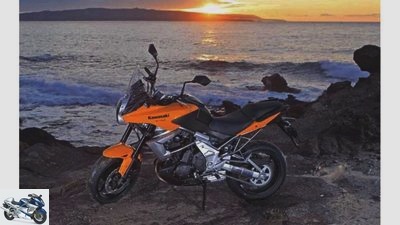 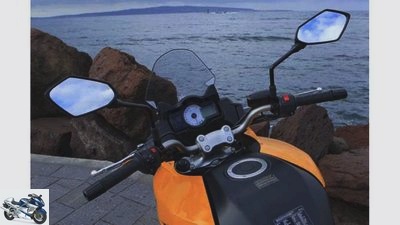 11/16
The readability of the display at night has been improved and the larger mirrors also provide more security. 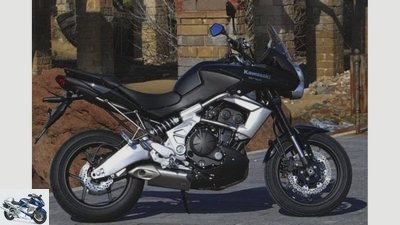 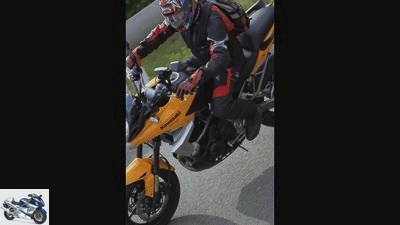 13/16
Fun, sport, touring – the Versys shines with many features. 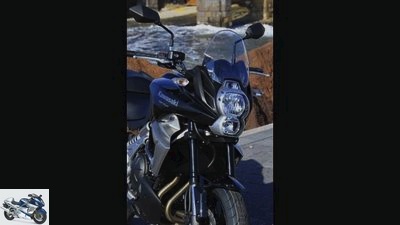 14/16
More pleasing: The headlights positioned one above the other no longer look so extraterrestrial. 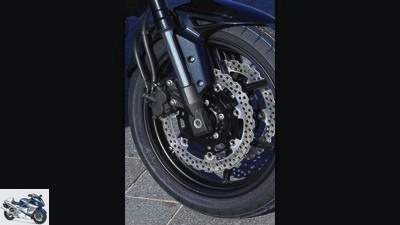 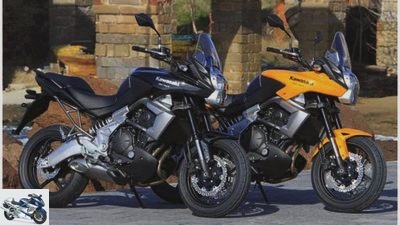 16/16
The machine is available in yellow and black and has been at the Kawasaki dealer since mid-February.

To stay in the language of our time: The Kawasaki Versys has received an update. It should now not only look friendlier, but also drive more friendly. MOTORRAD was allowed to try out whether this is true in Sardinia.

There are not many roads on earth that a biker should definitely have taken under the wheels. The SS126 road in Sardinia is definitely one of them. It connects the towns of Iglesias and Gúspini with each other and does not have a single meter of straight stretch on this 45-kilometer section. A wild roller coaster course made of asphalt: crazy-looking 300-degree radii alternating with sweeping curves and completely diffuse, yes, apparently willless and haphazardly lined up arcs and loops. A combination that pumps the sweat of fear out of the pores of novice drivers and the adrenaline into the blood for ambitious athletes. The best conditions for checking out the revised Versys, thought Kawasaki and invited the journalists to the island for a presentation.

And it shows its most beautiful, but also bitter side in winter: the thermometer shows five degrees in the morning. The starter does not even need a perceived turn, the parallel twin is already grumbling. Get on – oops, here you can already see the first changes: In order to swing the leg over the now slightly wider handles for the pillion passenger, you have to stretch it quite high. The Mausekino should now be easier to read in the dark thanks to white LED backlighting, and the seating comfort has allegedly been optimized through the targeted use of foams of different hardness. Sounds good, let’s go.

The seating position of the Versys is enduro-like: wide handlebars, narrow waist, upright posture. This, together with its comfortable bench, makes the machine ideal for enjoying the landscape. The engine and chassis also play their part. Because nothing about the Versys requires special attention, everything slips, is easy, and can be operated intuitively. You have your senses free for your surroundings. That recovers and relaxes. Both hand levers are individually adjustable, the clutch operation does not require a lot of manual force, the gears click cleanly, although not excessively easily, and the engine is very sensitive to the gas. In this way, the machine succeeds in instilling a lot of trust even in inexperienced people after a few minutes. 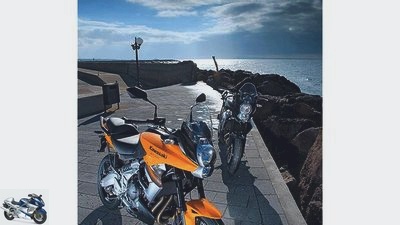 The machine is available in yellow and black and will be available from Kawasaki dealers from mid-February.

The main features of the Versys remained untouched. Chassis, engine, frame and wheels are almost unchanged. The technicians returned to fine-tuning. The engine is now rubber-mounted on the rear, upper suspension. The rubber pads on the footrests are also reinforced. Both measures aim to minimize vibrations. In the case of the test copy, this was successful. The 649 cubic twin runs silky smooth. Fine vibrations occur at 6000 rpm, but they are not a problem.

It only takes a few minutes for the Versys’ 17-inch wheels to turn onto the roller coaster. Take a deep breath. Anticipation. From now on, the mental imbalances in life will be compensated for with the sporty inclines. It’s almost sensational with this motorcycle. On the one hand, there is the precise turning that only requires a light pull on the handlebars. The machine lowers very neutrally and remains stable despite the relatively long and comfortably coordinated spring elements. More fascinating than the neutrality, however, is the power and elasticity that the small 650 twin shows despite its comparatively modest 64 hp. Between 3000 and 9000 rpm there is always 50 Nm of torque available – that is considerably more than what the competition has to offer. This pressure in lower and medium speeds makes the Versys something special: everyone, both touring riders and sports enthusiasts, can enjoy the SS126 in third gear. Nothing is missed. With 3000 tours, the speedometer shows around 40 km / h, ideal for the tightest turns or sightseeing. 110 km / h is then at 9000 tours – if you take the asphalt roller coaster with a sporty spirit.

Everything just fits together here. The Twin reacts powerfully, gently, controllably and with little load changes to every gas command. The chassis is stable, has precise steering and the machine is very easy to handle. So you stay safely on the ideal line. Once the temperature is reached, the braking power is also right, although actuation always requires more than two fingers. When cold, the stoppers look a bit dull. The ABS works inconspicuously, but does not regulate so sensitively. With hard braking maneuvers in an inclined position, the front wheel begins to stumble, the Dunlop D221 can no longer transfer the grip properly. The machine, whose name is derived from versatile, is not prepared for the ride on the very last groove.

Break in Gúspini, cappuccino for 1.30 euros. Looking forward to the return trip and looking back. When it premiered in 2006, the Versys was a very good bike with a multitude of virtues. It still didn’t sell very well. The marketing experts from saw the reason for this Kawasaki the eye-catching design, which is why the machine got its update this year with lots of cosmetic retouching (see box on the left).

Apart from the design, some things that could be criticized for the previous model have now been optimized: The pillion sits much better, the headlights illuminate more effectively, and the wind protection has been increased. We can only hope that this will be enough for the 7,995 euro machine to find more buyers. The Versys, which is only available with ABS in Germany, will be in the shop windows from mid-February. And unfortunately also next to sister ER-6n. The naked bike with the same engine is 1200 euros cheaper and has ten more horsepower. And the cheap is cool mentality currently seems to be stronger than common sense.

Technical data of the Kawasaki 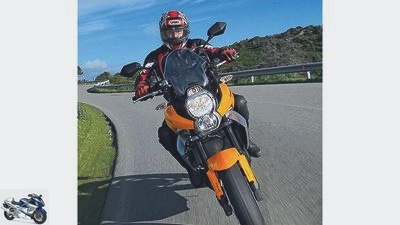 More pleasing: The headlights positioned one above the other no longer look so extraterrestrial.