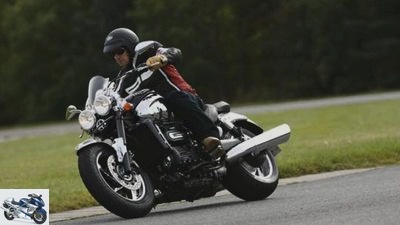 Neither is stronger and neither accelerates faster. The Triumph Rocket III is at the top of the cruiser charts. Now the British dares to approach the roadster segment with a different seating position, even more power and with ABS.

It doesn’t stomp, it doesn’t rumble, it doesn’t vibrate. Pure irritation. The personal system control checks the parameters again. Low seat height, fluffy bench, a handlebar like a sail pole, everything is correct. Clear indication: cruiser. V2 engine, what else? Ergo: stamping, rumbling, vibrating. But it babbles, hisses and hisses. No trace of vibrations. The mental warning lights flicker. Similarly, the scene noticed in 2004, when Triumph with the presentation of the Rocket III fundamentally questioned the unwritten laws of the industry: with more displacement (2.3 liters), more power (140 hp), more torque (200 Nm) than even the most powerful cruisers and, above all, without a V-engine. That was enough for the total affront. And maybe for that very reason for a decent sales success. After all, 18,000 Rocket IIIs are now rolling down the streets of the world. 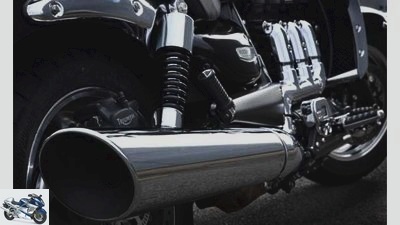 The exhaust system is reduced to two silencers.

And with this throaty hiss of the three-cylinder the new Rocket III Roadster continues the campaign of persuasion. Roadster? Right. In addition, the footrests moved twelve centimeters to the rear and two down: the seat was raised by 1.4 centimeters. There is no doubt: it sits much more actively on the Briton. And yet: the metamorphosis did not succeed without leaving any residue. The deep seat, the voluminous tank, the dissolute handlebars, all of this has the cruising character and is still clearly reminiscent of the Rocket’s roots. Why not? After all, something else has always shaped the character of this big bike: the engine. And as impressive as on the first day. Eight more horsepower, 21 Newton meters more torque in the roadster thanks to the modified collector and the reduction to two instead of three silencers. As if it was never enough. Regardless, the experience can hardly be more impressive anyway. Because a tug on the throttle is enough to unleash this monster, to squeeze the very best in the seat hollow, as if the Rocket had turned into the loop of a roller coaster. 2000, 4000, 6000 revolutions, the self-inflamed storm tugs more and more on the head and upper body, soon forces you to take out the thrust. 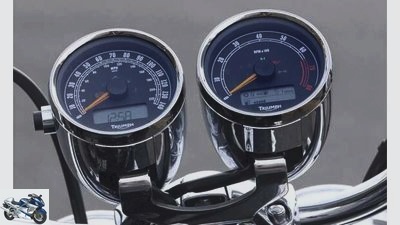 A shine for Gloria: the round instruments now also have a clock and a fuel level and gear indicator.

Thrust, the term used in aviation, aptly describes what is going on between the wheels of this power bike. All the more justifies the fact that the triplet is even slowed down by the engine management due to controllability in the lower three gears. As a reminder: In the top test of the 2007 Rocket III, MOTORRAD measured a torque cut by 25 percent in 1st and 2nd gear and a torque cut in third by ten percent. Relationships that, in spite of everything, don’t really matter. Because power and torque give this cruiser or roadster one thing above all: sovereignty. To start off, idling is enough, at 3000 tours the three-cylinder purrs to a comfortable speed. The throttle only takes care of the fine tuning. It couldn’t be more casual.

And so you begin to enjoy the ride on the tamed cannonball, not least because of the noticeably more comfortable rear wheel suspension. Finds only the logical continuation of the gigantomania emanating from the engine in the expansive tank, the floor mat-sized radiator grille or the thigh-thick silencers. You even catch yourself swinging the Rocket astonishingly quickly through wide curves and indulging in tight bends when the wide tires (150/80 R 17 at the front, 240/50 R 16 at the rear), the limited lean angle and 367 Lift kilograms of live weight against the change of direction. Especially since the big guy can come up with a huge bonus not only in the meandering: ABS. After Harley-Davidson and Kawasaki, Triumph is only the third manufacturer to take the path of common sense that is so urgently needed in this segment. 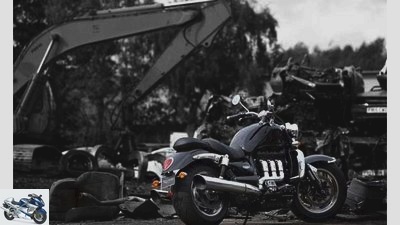 Roadster, chopper or what ?! In essence, the Rocket remains what it was – an impressive cruiser.

In normal operation, the system, which consists of Nissin (front) and Brembo (rear) brake calipers, pleases with moderate actuation forces. In the case of emergency braking, the combo regulates relatively early, as is customary in this class, and keeps the colossus on course even on wet terrain. Speaking of course. At 17,240 euros, the Roadster will cost 1400 euros less than the current Rocket III in the future. In addition to standard ABS and even more power, there is one thing above all: one cylinder more than is usual in the industry. 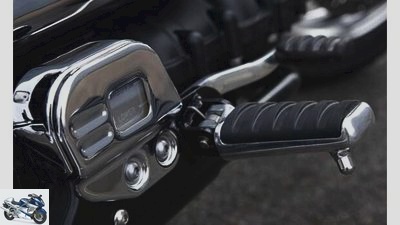 Everything about the brake fluid reservoir can be ordered a little more opulent.