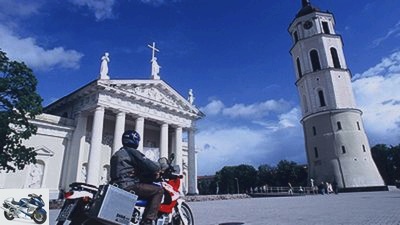 A motorcycle trip to the Baltic States is still a bit of an adventure. Even if the incorporation of the EU last year brought many former Eastern bloc states closer to the West? Lithuania remains near and far at the same time.

The ferry slowly pushes into the port of Klaipeda under the bright sun. The beaches are well attended – Lithuania welcomes us with the most beautiful early summer weather. A short drive through the city, then we roll again on the swaying ship’s floor and steam to the northern tip of the headland off Lithuania, the Curonian Spit.
There it goes dead straight south, and we shift down a gear before Nida, also internally. Hustle and bustle
is not trendy here. Right and left
the street well-tended gardens and houses with crossed horse heads on the gable. They are typical of the region and are intended to keep people away from harm.
We park the machine and hike
to the water – and discover Africa. until
Mountains of sand rise up to 60 meters behind the water line, dunes in Sahara format, impressions of Africa on the Baltic Sea. “Everything is pathless, just sand, sand and sky,” wrote Thomas Mann about the spit. According to a legend, the giantess Neringa once raised this sand wall to protect the fishermen from the storms of the sea god Bangputis.

The view from the high sand mountains is impressive: the lagoon to the east, the Baltic Sea to the west and the south
the Russian half of the spit as well
the Kaliningrad enclave. The closed border is less than two kilometers away. And who have no trouble with Lithuanian
or – even more unpleasant – want Russian border guards should now slowly retreat. So we dedicate ourselves to the dreamy port of Nidas, where amber shimmers at stalls,
the “gold of the Baltic Sea”. A fresh wind blows over the dunes and a few hard-boiled sun worshipers. More and more people, especially young people, are now discovering the region, says our host Birute Kargiriene in fluent German. Gone are the days,
when mainly older “homesick tourists” came who had spent their childhood in what was once East Prussia.
The way back to Klaipeda leads
us through the picturesque fishing villages of Preila and Pervalka, located directly on the lagoon, to Juodkrante with its endless promenade on the lagoon coast. Back on the mainland, storks are our constant companions from now on. At Pagegiai we leave the main road and dig through gravel and sand along the floodplain of the Memel, occasionally passing a small village. The border with Kaliningrad is again in the immediate vicinity. One of the new EU external borders and apparently difficult to control. Stolen cars diffuse to the east, prostitutes and drugs to the west. The exchange of goods and services was probably imagined differently in Brussels.
The Rambynas shows up, a marriage-
times more pagan and in Lithuania very much
well-known sacrificial mountain. From fifty meters above sea level, you can see the silvery ribbon of the Memel in the Lithuanian plain, with children splashing around on the banks. Idyll and illusion at the same time, because pollutants from Lithuania and neighboring countries
have brought the largest river in the country into dangerous tipping position.
It got chilly when we arrived in the capital Vilnius, excited to see whether the blind date arranged by email with our landlady would work. It works out! At the meeting point in front of the cathedral, a red-clad lady steps up
us too. Angelina! We are easy to identify as a couple with a motorcycle.
It brings us to a beautiful private quarter on the edge of the old town.
In our idyllic backyard we meet the painter Elena Andrulienes-Jasienes. With the few words of German that
the 81-year-old tells of the hard times under the Soviet occupation. And the hatred that many have for the Russians. Relations with the former occupying power are still strained, but EU and NATO membership are helping to regain self-confidence.
The next day we stroll through the beautifully renovated old town. The 540000-strong metropolis is called “Rome of the East”. And not just because of the architecture, by the way. At a
Cappuccino in the pedestrian zone
we admire the other beauties of the country. Slim and long-legged, they strut past us. Obviously, this is primarily about one thing: who wears the highest heels, who the shortest skirt? The pedestrian zone is becoming a catwalk. Italian moments in Lithuania.
The next morning, on the other hand, going to church on Sundays determines the picture. We also leave a quick prayer
go for a dry day. Vain. Another rain front pulls over the city. When it clears up in the afternoon, we go to Trakai Castle, the national shrine of the Lithuanians. From the shores of Lake Galve, we look at the reddish glowing brick walls. Since the weather holds, we drive to Druskininkai, in the south of the country. The streets – as if drawn with a ruler, flanked alternately by fields and forests.
Suddenly at Grutas border posts, barbed wire, watchtowers. But it’s not the nearby border with Belarus, but the well-guarded entrance to the controversial Grutas Sculpture Park. Dozens of Lenin and
Stalin statues that were once symbols in public places across the country
Soviet power represented now form the backdrop for the family outing. A cattle wagon and wooden paths are supposed to
remember the deportation of hundreds of thousands of Lithuanians to Siberia.
On the way back to Vilnius goes
it past farmhouses, stork nests and horse-drawn carts. Here in the border area the past still seems to exist. What about the future? Doesn’t look too bright. Small acreage, low productivity and high unemployment. And from Brussels’ point of view an agricultural share that is far too high.
Back in Vilnius, we feel like we are at the end of a little journey through time: Lenin statues, horse-drawn carts, nature and finally this city that tries to build a bridge between tradition and modernity.
Chic shops dominate the main shopping street, Gediminas Prospect. But with an average monthly income of 330 euros, only a few can shop there. The upswing of recent years has passed most of them by.
We say goodbye to Angelina. She promptly forgot the English sentence she had apparently learned specially for this purpose. Helpless shrug of the shoulders, an enchanting smile and an international “Ciao” replace him charmingly.
It goes in an arc through the north-east of the country, which is characterized by lakes and forests, back to the coast. At Siauliai, the rattle and clatter of thousands of wooden crosses and rosaries waving in the wind awakens our attention:
the mountain of crosses. Here put the
People cross to commemorate the victims of Stalinism. The ghostly place of protest has now become a popular place of pilgrimage.
Then the sky opens again
its locks and powerful gusts of wind almost sweep us off the track.
After three hours of fighting, we save ourselves on the ferry. To leave a country, its history and its will for freedom
impressed us. “We in Europe” read a large banner in
Vilnius. Welcome, Lithuania!

Lithuania is the largest and most densely populated of the three Baltic states: 3.7 million people live on 65,000 square kilometers. In order to
Lithuania is bigger than Switzerland and at least it has
a 293 meter high mountain. Welcome to the Baltic Sea.

D arrival
Either overland through Poland (exhausting, lengthy, only country roads) or by ferry across the Baltic Sea: From Kiel there are regular connections to Klaipeda, travel time 19 to 21 hours, from around 100 euros including motorcycle. More at www.scandlines.de and phone 01805/7226354637. A cargo ship runs three times a week from Sassnitz on Rugen, on which there are limited tourist cabins and which offers a special on-board atmosphere. Travel time 18 hours, information by phone 038392/22681. German
You only need your identity card to enter the EU country Lithuania, but you don’t need to-
the green insurance card. Particularly recommended travel months are May to September, hotels should be booked in good time for July and August.
D history
From 1944, Lithuania was under Soviet rule and was behind the Iron Curtain for almost 50 years. Thousands of partisans were still fighting the Red Army in the 1950s. Under the influence of Gorbachev’s perestroika, Lithuania led the struggle of the
occupied republics against Soviet rule. The democracy movement
Sajudis found increasing popularity among the population, won the February 1990 elections and proclaimed independence. Hardliners
in the Kremlin sent troops to crush the independence movement, killing many people: civilians,
who were protecting the parliament and the television tower in Vilnius with their bodies were overrun by Soviet tanks. First
with the failed coup against
Gorbachev in the summer of 1991 saw the turning point. The West recognized independence
Lithuania became a member of the United Nations in the same year and finally a member of the EU in May 2004.
Whose & accommodation
Larger places offer plenty of choice
Restaurants and cafes with locals
and international courts. Lithuanian cuisine is simple, mostly meat,
Vegetables, cabbage, potatoes and dumplings. Not easy, but tasty! In the capital Vilnius there are also pizzerias and fast food restaurants. The prices are at the
Coast slightly higher than inland, but still significantly lower than here on land.
In all cities there are hotels of different price ranges as well as nice and cheap private quarters on the Curonian Spit, mostly in traditional wooden houses.
D motorcycling
Road conditions and traffic volume
are extremely pleasant. The only thing is that there are often no signposts on country roads, so good ones
Card is important. There are two highways:
The A1 from Klaipeda to Vilnius (312 kilometers) crosses the southern part of the
Landes, the A2 from Vilnius to Panevezys (135 kilometers) runs through the north.
The petrol stations are mainly concentrated around the larger towns. they offer
unleaded gasoline (92 and 95 octane) for example
a third cheaper than in Germany.
D literature & Internet
Recommended are “Lithuania” by Reise Know-How for 14.90 euros and the title of the same name by Marianna Butenschon from Beck’s series for 12.90 euros. In addition, the Baedeker “Baltikum” with a travel card in 1: 750,000 for 19.95 euros. Maps: Shell EuroKarte »Baltic States«, 1: 750000; World mapping project »Lithuania and the Kaliningrad Region«, 1: 325000. Local bookstores offer a good card in 1: 500,000 for two euros.
Internet:
www.litauen-info.de
www.litauen.org
www.baltikuminfo.de