Custom, live US cruiser or roadster

Launched in 1920, the Indian Scout made a name for itself by defying the wall of death in 1928. Indian therefore adopted the codes of its history to relaunch the model almost a century later, both in terms of its characteristics. ‘then (performance and power) that at the level of its challenges by making it again cross the wall of death for its launch in Sturgis. The result is there with a machine of 100 horses almost as slender as its ancestor but with all the contributions of modern technology for a machine which now wants to be the spearhead of the brand, especially at the level of women. Successful bet ? Test… 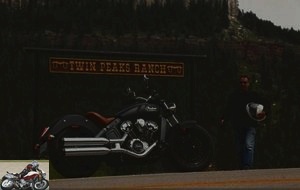 Difficult to immediately put a label on the Scout. Not really a roadster nor quite custom, it would be almost a bobber or a signed preparation as we see more and more … with a real game of contrasts between a big coil at the front and a minimalist headlight, a single-seater leather saddle highlighting the rear mudguard … The whole enclosing a huge injection V-Twin that does more than its 69 ci, or 1133 cm3 official. What is certain is that it is a big heart, each cylinder being marked by the I of Indian … while the crankcase signs the full name of the brand…. 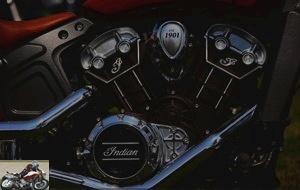 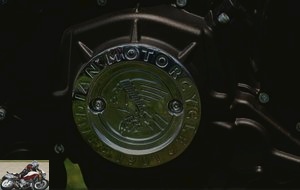 An engine casing cut in the mass and extended by the two huge exhaust pipes. 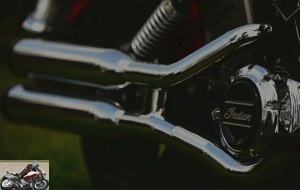 The chrome is present, but really enhances the bike unlike some customs models where the chrome gives the impression of being there by obligation, as if the definition of a custom went through the omnipresence of chrome. Nothing too much here: just what is needed to give personality to the model … and therefore to its pilot. The finish is there, from the omnipresence of the Indians logo including in the metal to the particularly elegant leather saddle. 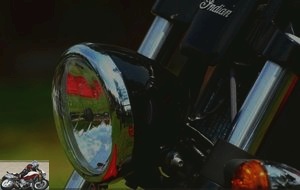 and even Indian branded tires ! 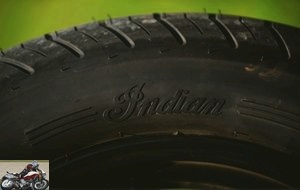 With a slim saddle at just 635mm in height, there is no need to step over the bike, the saddle is so low. Even the 1.60 pilot puts his feet flat on the ground and his legs are still flexed. However, the older ones also find their marks easily without looking like toads.. 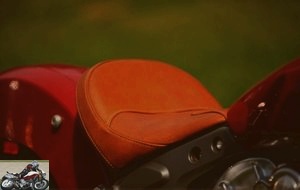 The hands fall almost naturally on the handlebars, even if the arms are almost straight. Compared to a roadster, it is the legs that must lengthen noticeably forward to find the footrests, but without any exaggeration. The arms being extended, the gaze falls quite easily on the meter, minimalist at first with its analog speedometer. But the digital screen can display the tachometer and the traditional partial trips, gear engaged, totalizer, clock … the information passing through the trigger located in front of the left handle. The commodos are American or Japanese standard. So we quickly find our marks. 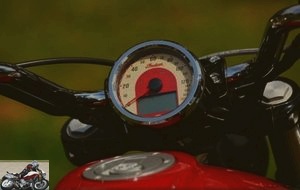 With the low saddle and flat feet and a side stand that barely tip the bike, it can be lifted effortlessly, even by a 50-kilo woman, despite the full 253 kilos of the machine. (a featherweight in the category). The thighs finally enclose the tank more easily than on many customs, where the natural position usually tends to separate them..

Deep growl, the Scout snorts. First engaged, the gearbox is easier than that of the Chieftain or Roadmaster and the speed engages clearly. The first few meters are easy. At no time does the weight seem to drag the pilot, even over the very first kilometer hours. The handlebars even seem strangely light, further amplified by the front flange. 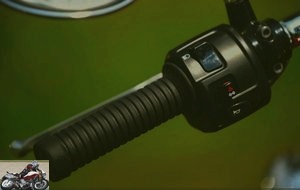 For the anecdote, the US model starts, first even with the crutch unfolded, a lug on the crutch taking care of folding the crutch at the first stone encountered! The legislation in Europe being different, this will not be the case with us with the impossibility to start in first if the crutch is unfolded..

The first is very long and climbs briskly up to 70km / h … already too fast. In fact, we pass the gears quite naturally towards 2-3000 rpm instinctively for a smooth ride; a diet that the Scout particularly likes, especially through the absence of vibrations. At these speeds, it seems to evolve smoothly. And yet, it suffices for the right hand to be a little more vigorous and the departure is done with vigor and at the limit of natural burn. Because the Scout has a couple and not only on paper.

With a relatively tight handlebar, the interfile is done naturally. Above all, the flat feet make starting and stopping in town in traffic jams without any difficulty or sweat … Except that of the heat given off by the engine in hot weather. 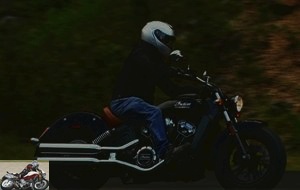 With a second pushing up to 110 km / h and a third up to 145 km / h, the Scout slips through the highway like an arrow. And at 145 km / h, it is still only 3,000 rpm, or at mid-speed! Its look and especially its total lack of protection does not predestine it a priori for long motorway journeys but it is neither worse nor better than a standard roadster. The 150km / h on the handlebars go very well and you have to climb higher to really feel the pressure. 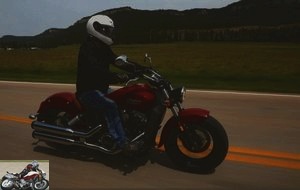 Capable of driving at 45 km / h in the last gear and at half its engine speed at 145 km / h, the Scout is capable of the big gap … To adapt all the better to the pranks of its pilot. The beginner will appreciate its available twin, being almost 4 cylinders by its smoothness at mid-speed and its 2-3000 rpm. The pilot will appreciate making it howl in the laps above 6,000 rpm. The first will be on the latest reports. The last will be more on the intermediate gears … almost rarely going to pass the fourth! Suddenly, on departmental, we choose the pace we want. The beginner will appreciate its smoothness and its availability and will almost forget the gearbox. The pilot will appreciate the little bomb that he then has between his legs to push it to its limits. If the engine has no limits other than that of the pilot, the bike begins to have a life of its own when the virolos follow one another at a faster pace. It wiggles noticeably in a healthy way and you just do not have to tense up on the handlebars to appreciate the handling. The Soout is alive at all levels and the sensations are at the rendezvous. 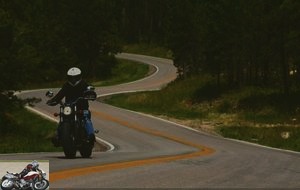 There are two 76mm side shocks but their almost horizontal mounting limits their work despite their large travel. It’s good for the Sunday walk. This is not for all that a touring and for the long trip, it will be better to turn to a Chieftain. Comfort is excellent as long as the road is in good condition. In the city, it is fine but the defects of the road surface are more easily reflected on poorly maintained roads. 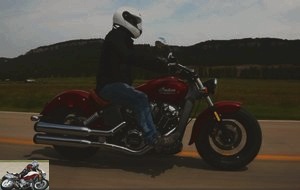 Both the front and rear brake provide an excellent feeling. And the power is there too, despite the single 298mm disc with dual piston calipers present both front and rear. The distribution of the two is well respected with an efficiency of 2/3 for the front and a third for the rear feeling. You just have to use them together, not to get to a stop but not to block. Because blocking the front does not require any particular force, nor even the rear. In daily use, the front can be used with two fingers and without forcing. If you take the hand, the front is locked. But what is good is that the bike remains perfectly in line so far. We can therefore block without being afraid. The question will not arise anyway for Europe, because only the ABS version will be imported into France.. 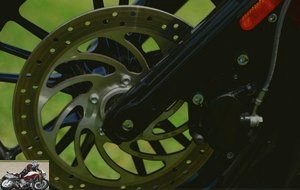 With a 12.1-liter tank, the Scout should provide a range of 200 kilometers … naturally depending on the type of driving. In the beginner version, it can exceed 200 km, but for the pilot who pulls the model to the maximum of his tachometer, it will be in reserve under 170 km. 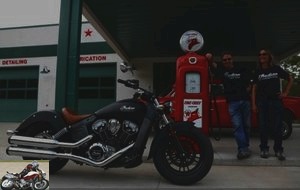 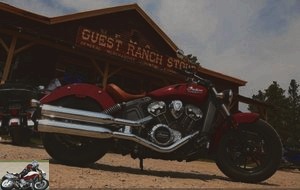 Indian has succeeded in offering a motorcycle with two faces, capable of offering confidence and simplicity to the beginner while offering a more violent face to the experienced rider. The bike has no equivalent in terms of both looks and performance, with a real driving character and a real life that makes you rediscover what the bike was in its beginnings with real personalities. Attention to detail and the seal of history with the renewal of a historic brand complete the picture of success. Only its price of 12,990 euros will not make it a motorcycle within the reach of all budgets. The price of the exception ?