Busy tourism has become a somewhat ambiguous notion. How to enjoy a trip in peace and speed when the road is bludgeoned by time, legislation, fashions, opinions? Kawasaki responded with the H2 SX, which is a political correct slap.

So much the better ! Here’s a VERY fast touring machine. With the demonstration of power of which it is capable, this sport-GT further increases its level of technology with semi-active suspensions and a series of technical improvements. The H2 SX SE wins a +. And that’s a big plus.

Imposing, the Kawasaki H2 SX is not a svelte 650 Ninja. Her proportions instantly make you realize that she plays in a muscular category, with an assurance and a presence capable of savagely dismissing anything that comes in front. A perfect figurehead for a Russian icebreaker. On the other hand, the level of approval is quite different; higher in road quality with the installation of suspension elements controlled by the KECS.
Another nice acronym to simplify the additional electronic layer. What’s this ? This is the “Kawasaki Electronic Control Suspension”. The ZX-10R SE was the first to adopt it, bringing the brand into the field of semi-active damping. By analyzing the profile of the road and the dynamics of the motorcycle induced by the motivations of the rider, the KECS adjusts the fork and shock absorber settings in record time. Control solenoid valves react in a thousandth of a second.

The H2 SX SE + will thus adapt its damping in real time, smooth the road for you and boost comfort or sportiness, depending on the mode chosen. Sport, Road, Rain, or Manual; supplemented by the on-board load adjustment: 3 levels are available: pilot, pilot with luggage, pilot and passenger with luggage – and what to do when you have a passenger and no luggage ?!?
How does KECS work? With a battery of components. It receives a whole series of information to calibrate the suspensions, coming from the travel sensors at the level of the fork and the shock absorber (every milliseconds), from the inertial unit (every hundredth of a second) and from the control unit. ‘injection.
At the Showa 43 mm inverted fork, compression and rebound are controlled by electronics; only the preload is manual. For the BFRC-Lite shock absorber, everything is managed by the KECS. While on the hypersport, the preload at the rear is fine-tuned with a tool.

The left commodo is budding. This is because there are functions on board. Including of course the adjustment of the suspensions. Bonus, this can also be done from a smartphone. With the Bluetooth Rideology App, you adjust settings with a simple tap on the screen. The pairing between the telephone caller and the bike also makes it possible to consult the logbook, to check periodic maintenance, to manage calls and also to receive emails..

To better justify its +, the hypertourism Kawa is pleased to seize the best brake calipers currently available to the public, the Brembo Stylema. Lighter, more powerful and still offering a little more feeling than the already acclaimed M50.
Its body wins the new “self-repairing” paint, capable of healing micro-scratches. As for the suitcases, the presence of which will quickly be essential, seen as the motorbike treads to visit a bit of everything, you will have to go and type in the options.

For many manufacturers, sports are the ones who grab the best of technology and the most successful foundations. At Kawa, it seems that it is this H2 SX SE + that wants to become the flag bearer. So much for driving assistance, already standard on the H2 SX SE. Let’s keep it concise: 3-level traction control, four driving modes, Shifter Up & Down, standstill assist, adaptive cornering lighting, KCMF cornering dynamics control, flexible cornering ABS cornering, KIBS optimized braking with anti-stopping, KEBC engine brake control, two power modes …. Everything to reassure / optimize each outing. But not enough to make us forget the exceptional feeling of the compressor. An energy grenade, perfect for letting emotion take precedence over reason when the turbine starts blowing hard.
200 horsepower to distribute, plenty of torque, but it is above all the way it all lands that makes the personality of the H2 SX.

In addition to the significant price increase, the + also leads to an increase in weight of 6 kilos. The plumage respects the figures of the scale. With a good balance, the 262 kilos will quickly be forgotten, but you should not neglect their presence either..
Having reached a technical achievement in the sport-GT segment, the 1000 H2 SX SE + is at the top of this new category of road: supercharged tourism. 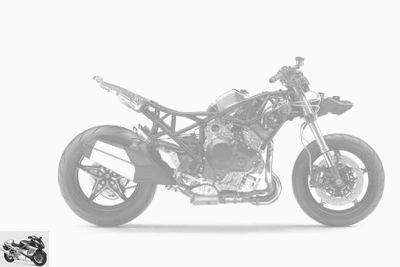 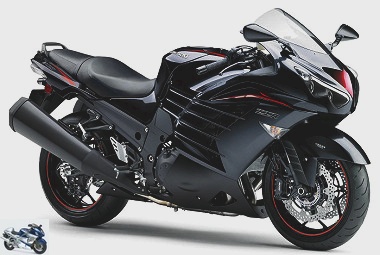 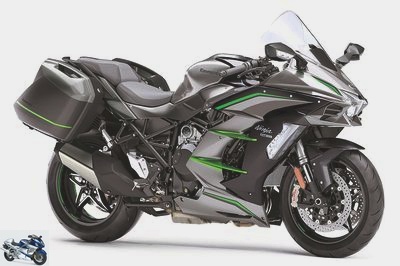 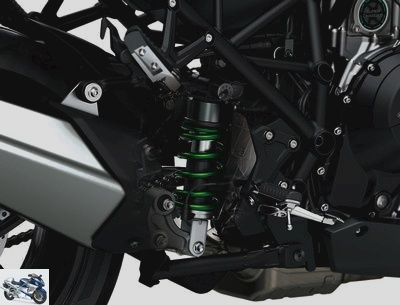 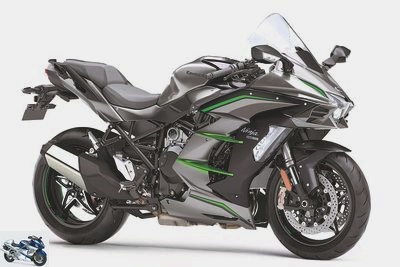 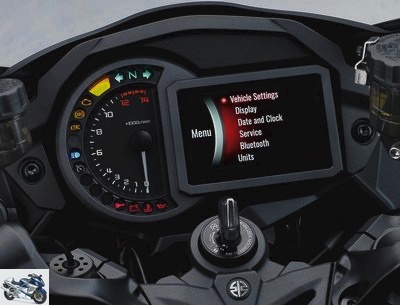 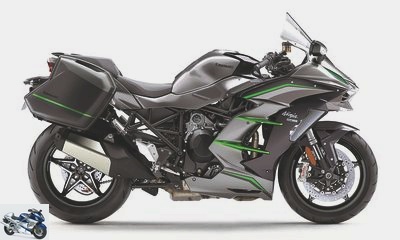 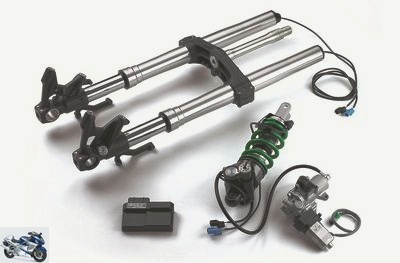 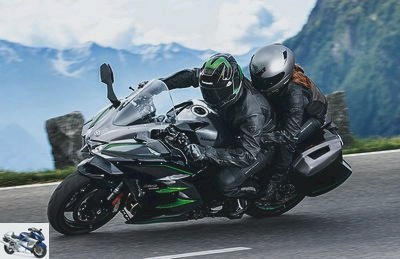 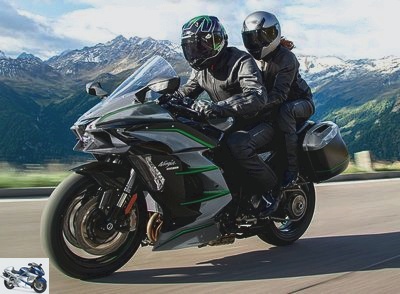 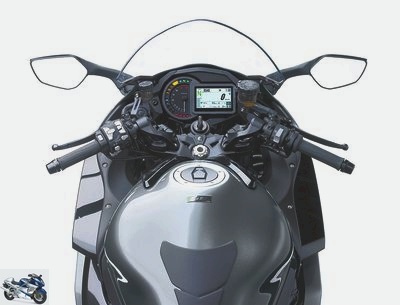 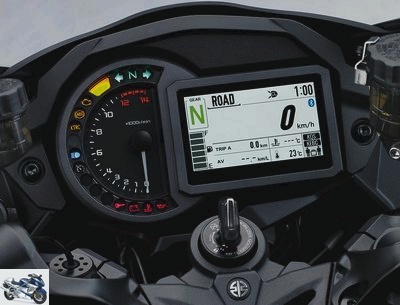 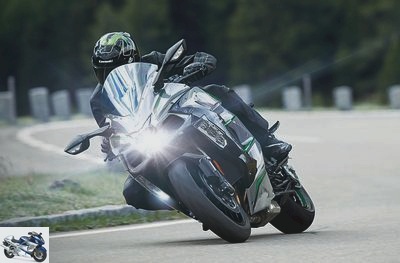 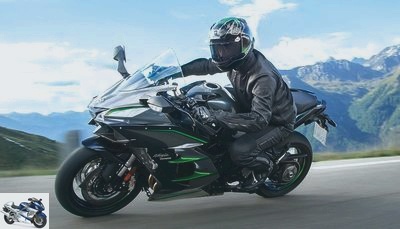 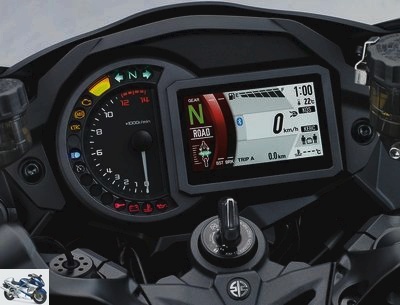 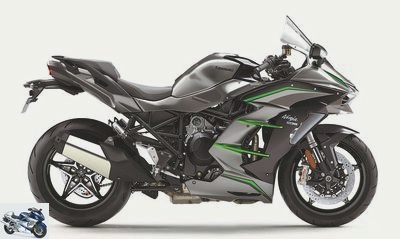 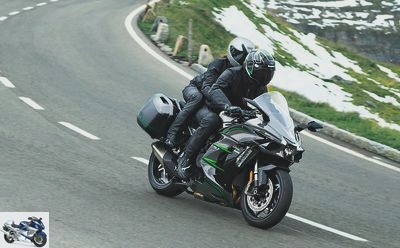 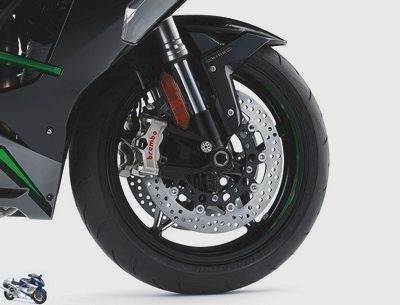 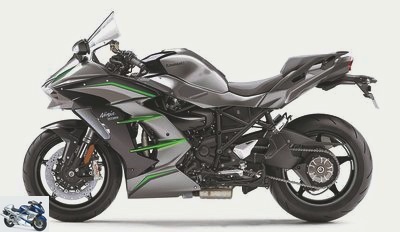 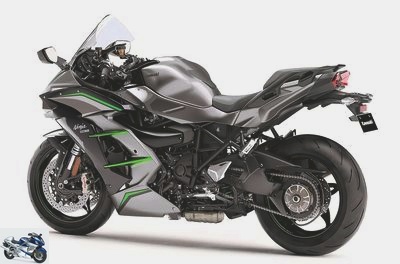 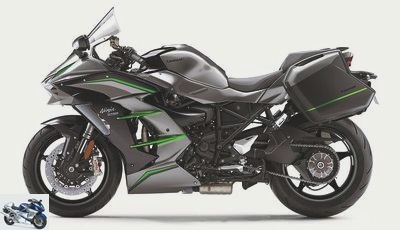