Eternal absent from the Kawasaki range, apart from the unlikely KLV 1000 (Suzuki V-Ström renamed), the maxi-trail model finally appears at the manufacturer of Akashi, betting on a stable segment in terms of sales. The brand also wants to place its machine between a more urban Honda Crossrunner and the "high-end" maxi-trails of the Ducati 1200 Multistrada, BMW 1200 GS and Triumph 1200 Tiger type: an intermediate, modest and surely prudent positioning..

If the novelty finds an obvious aesthetic connection with the Versys 650, it nevertheless adopts very different technical choices, especially in terms of engine, forgetting in particular the twin for a 4-cylinder. However, far from starting from scratch, engineers turned to solutions and systems found in other in-house models. Adapted for the occasion, engine, chassis, exhaust and electronic assistance come together in a new concept. To get an idea, we are invited to the Canaries to study the Japanese wader. 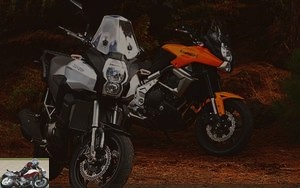 The front optics, at least its minimalist design with overlapping lights, is arguably the only thing in common between the two members of the Versys all-terrain family. If the midsize is slender, the Versys 1000 has gained volume and seems more massive, especially in its dark color.. 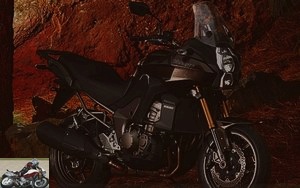 Also available in a metallic white livery, the play of contrasts then breaks this slightly heavy front line and refines the design of the machine. Capped with a bubble adjustable in height (over 30 mm) via two dials, the imposing muffle widens towards the sides and the tank. Large airflow deflectors energize the line, concealing the frame plates and stretching towards the upholstery. Generous, the pilot and passenger seats are based on a specific rear frame extended and reinforced with tubular steel trellis. Sheathed in a resin half-shell, it supports grab handles of the same material which join together, forming the luggage carrier. 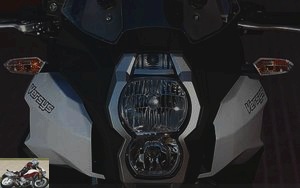 The design of the rear light remains sober, dominating a single exhaust on the right side. Borrowed from the Z 750, painted in matt black, this slim silencer seems lost on this bulky road. However, it welcomes the four collectors of the well-known Japanese block. Because it is indeed the 4-cylinder in-line of the Z 1000 and SX family that equips the great Versys. New and unique on a trail, this architecture has been extensively reworked to offer more availability at low and mid-speed. Thus, the combustion chamber, lower compression, camshaft profile and gearbox ratios have been modified. Compared then to its road cousin, the new adventurer loses 20 horsepower and 0.8 m / kg of torque, i.e. 118 hp at 9,000 rpm and 10.4 m / kg at 7,700 revolutions / minute in the free world (106 hp and 9.6 m / kg for frenchies). 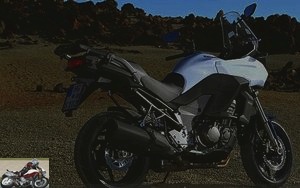 This engine takes place in an aluminum perimeter frame borrowed from the Z 1000 SX. Reinforced at the level of the steering column, it also features rigid elements enclosing the cylinder heads. These mask the engine even more, as do the half-shoes and wide side scoops. A little regrettable for this well drawn block.
We also lose the aesthetic side shock absorber of the 650. A backlink-type system, adjustable in preload and rebound, is mounted horizontally on a rocker, positioned above the swingarm axis. A 43mm Kayaba inverted “Big Piston” type fork guides the front axle. This element is adjustable in compression on the two tubes and in rebound only on the right. 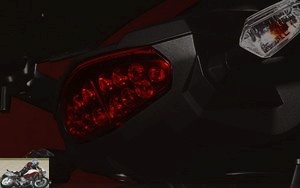 Front braking is handled by 4-piston axial calipers clamping two 300mm discs and a single rear piston clamping a 250mm disc. Good news, the ABS system is standard! Kawasaki also equips the Versys 1000 with its configurable KTRC traction control, on the handlebars, in 3 levels and disconnectable. This combines the system present on the GTR 1400 and the sportier S-KTR of the Ninja ZX-10R. Its intervention intensity varies to favor either the best acceleration or optimum stability. Two injection profiles are also available, one of which limits the potency to 75% of its maximum. Any offroad changes will only be more reassuring on this fully loaded 238 kilo machine. A rather contained weight.

The Versys 1000 is surprisingly thin at the crotch, as the front part of the machine is imposing. Despite a saddle height of 845 mm, the ground support is good for the driver of one meter eighty-four and leaves a correct ease for the maneuvers..

Generous in its forms, the trail is also in comfort. You immediately feel the softness of the saddle, wide and deep. Thick foams are, according to Kawasaki, the most comfortable in the range. It is easy to see. Under the pilot / passenger seat block is a fairly well-supplied tool kit, with the particularity of being housed in a plastic cylinder and closing with a butterfly. And the road on stilts has other advantages for the trip. 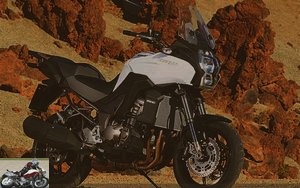 Positioned fairly straight, the torso does not force in any way and the arms fall naturally on the wide handlebars. Lacking grace, the volumes of the maxi-trail reveal a real protective functionality. The legs are housed in the notches in the tank and the body is naturally sheltered behind generous side air deflectors and the large fork crown. The interior trim of it just lacks a bit of harmony and an empty pocket. Its playful depths are rough on the eye. Fortunately, the dashboard is of better quality.. 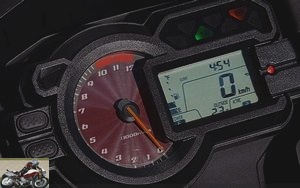 Clear and legible, it consists of a large analog tachometer (red zone at 10,000 revolutions / min) and an LCD window. This includes a 6-stick fuel gauge (average consumption announced at 6.5 l./100), tachometer, and engine temperature. The selection of the choice of cartography and traction mode is made via the cursors on the left hand switch. At the top of the screen are successively displayed various information: clock, odometer, double trip, average consumption and remaining autonomy. 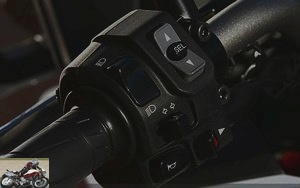 In the end, we especially regret the absence of a central stand, the optional addition of which will be impossible due to a too large exhaust line….

The ramage of the four-cylinder matches the plumage of the silencer … nondescript! And so muffled that it is hard to know if the 1000cc core is working properly … Enough to please specialist equipment manufacturers! On the other hand, the imagined and promised sweetness is there.. 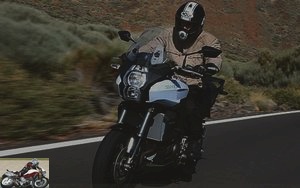 The Versys 1000 soars with vigor. The balance is excellent … so much so that you almost completely forget the weight. Flexible, the large block Z allows, without vibrations or jolts, a pace of 50 km / h at 1,000 rpm on the last report. On the intermediaries, the good engine availability makes the machine quite lively. Supported by a soft and precise box, urban evolutions are pleasant.

Whether small streets or large arteries, the Versys is at ease, benefiting in addition to a reduced turning circle. The mirrors reflect a wide field, the image of which is, unfortunately sometimes frenzied.

Even a little "deflated", the four in line delivers sympathetic accelerations … but more linear. In line with the demands of its multipurpose profile, smoother power curves and longer gear ratios. At the legal 130 km / h, the long-legged Z chompes on the brakes at 5,000 rpm, ready to give you more, much more. Because at the end of the red zone, the Versys takes you at almost 240 km / h, with an almost light heart. Almost, because a little sway has been occurring on board for some time, the consequence of the aerodynamics of the aircraft carrier. Just enough to give back and avoid administrative troubles. 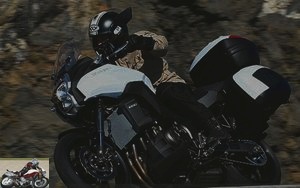 At slightly less criminal speeds, and equipped with suitcases and top-case, long-term stability remains remarkable. The protection offered by the bubble is not so much. In the "high" position, it generates eddies on the helmet and the upper body. Adjusted to the lowest, it gives more comfort, the air pressure then being slightly increased but also more constant. The solution is either to lie down on the reservoir, or to quickly discover the secondary network. Given the profile of our frame, this will be the number two choice !

Displaying a docile behavior under 4,500 turns, the Kawa offers two faces. Muffled if you follow her grizzly character, or sassy if you tease her a bit. Expressive from 5,000 to 9,000 turns, the Versys 1000 then twirls along the narrow curves of the Canary Islands. The wide handlebars allow for quick angle changes, although if you really pick up the pace you can feel the limits of the soft suspension. Without however breaking up, the front axle becomes more blurry and the fork plunges noticeably under braking. The rear shrinks on heavy raises. Accelerations which, however, readily invite mechanics that are quick to rev up. However, on this point we lose the explosiveness of cousins ​​Z and SX. Less lively, the engine of the Versys offers a more targeted pleasure at mid-range, with more torque at low speed than the Z1000SX and forcing to play with the gearbox.. 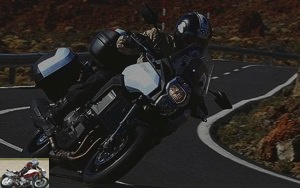 After a slight adjustment of the suspensions (hardening of the preload and braked rebound) the behavior becomes more homogeneous. We wind up at a good pace, counting on the quickly available grip of the Pirelli Scorpion Trail. The 17 "wheels clearly indicate a preference for asphalt. It is also the choice of agility at the expense of all-terrain capabilities. The correct ground clearance allows respectable angle grips that limit the repeated friction of the toe clips.

To slow down, all you have to do is grasp the brake control with your finger. The decelerations are efficient and the grip of the lever on the angle does not over-lock the steering. The rear caliper acts as a discreet retarder, nothing more. Powerful and enduring, braking, even hard, will not be enough to trigger ABS, except on the road.
This is also where we take good measure of the in-house KTRC traction control. Not very intrusive in mode 1 and 2, it eliminates any risk of the rear tire escaping in position 3. Coupled with the engine mapping mode limiting power to around 90 hp, it provides the Versys 1000 with first-class traction.
out of the asphalt. 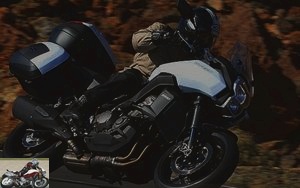 Balanced, it gives rigidity and lightness to the Kawasaki maxi-trail. Once the suspensions are adjusted to a less Pullman profile, the Versys 1000 is pleasant both in large curves and in small corners. Mass transfers are still noticeable when braking hard. 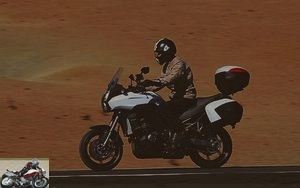 If the attack of the calipers is measured when the levers are engaged, its intensity then increases very quickly if we insist with appreciable progressivity, therefore for a machine intended for various surfaces. The Bosch ABS control unit manages any wheel locks as well as possible. Its action remains discreet and without too many jolts. 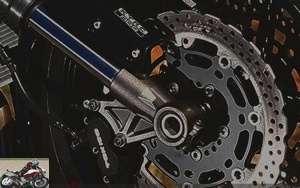 Whatever the rolling surface, the comfort remains remarkable. If the general flexibility of the damping can sometimes hamper the precision in sports use, it brings a constant appreciable pleasure. But it is above all to the thickness of the saddles that the Versys 1000 owes its soft Moroccan pouf, guaranteeing long-distance trips without having a tanned butt.

Large profiled suitcases and two-tone top-case containing two full-face helmets are available as an option. The fixing frames are, unfortunately, no more aesthetic, once the luggage is removed, than on the Z 1000 SX. Kawasaki could have integrated a permanent device to the resin plates of the rear shell. 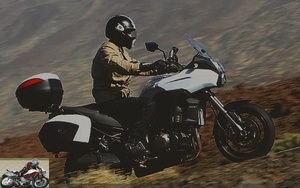 Kawasaki wanted to use proven and reliable solutions to offer a machine that can be easily used on a daily basis. In view of the test, the manufacturer of Akashi fulfilled and passed the result according to the specifications, with his choices of both chassis and engine. The best of greens for a motorcycle of cities AND fields … (Elysees).

The technology is there, and so is the performance. There remains a specific aesthetic, even invasive, even for a trail. If all of its more or less direct competitors also have "faces", the Kawa is not the most attractive. Out of these aesthetic considerations, it also lacks a gimbal. Even if it means digging into the house parts bank, a certain GTR could lend its transmission … but undoubtedly at the expense of an additional overweight.

The Versys 1000 therefore plays well placed, for fans of the four-cylinder in-line, with a specific positioning both in terms of plastic, character and chassis … enough to offer new paths for its new muse on the track already. well borrowed from maxi-trails.