What facies! For its 2015 evolution, the Kawasaki 650 Versys has given itself a new face … and that it suits it damn well. From its appearance in 2007 to phase II, this versatile trail boasted of a cartoon robot face, certainly intriguing and unusual, but not really sexy..

It’s not just the face that changes. It’s a total overhaul of the front. More aggressive fork crown, incisive sidewalls, repositioned indicators, improved protection; it asserts itself the Versys !
With this almost feverish pace, the right hand would almost itch. And as if it didn’t want to spoil the impression, the 650 Versys III has stepped up in power. Let’s play twin! Still coming from the ER-6, the parallel twin has gained 5 horsepower and 0.3 mkg. The manufacturer has also focused on better filling mid-range and reducing consumption. The maximum values ​​are now asserted: 69 horsepower at 8,500 rpm and 6.5 mkg at 7,000 rpm. More fishing, but obtained a little higher in the turns than before. The exhaust has been revised accordingly: it is formed from a single piece to boost performance at high revs.
In addition, by arranging a whole series of silentblocs in strategic places (front engine mounts, handlebars, footrest plates), Kawa makes the hunt for vibrations..

Typically trail without being an all-terrain machine, the 650 Versys is relaxed to drive, and increases its travel potential. This is not immediately visible, but on the chassis side, there is a little bit better all over the place. For example, the footrests drop 15mm and move forward 20mm, significantly relaxing the rider’s legs. As for the suspensions, the shock absorber benefits from a revision of the settings and a new easily accessible preload adjustment wheel, just under the saddle). The inverted 41 mm fork is more pampered: new longer legs, separate functions (spring in the left tube and cartridge shock absorber in the right) and accessibility at the top of the settings. Kawa put everything directly on top of the tubes; you adjust the preload on the left, compression and rebound on the right.
Let’s move ? We adjust the new adjustable bubble, we polish our suspensions, and we finish preparing. The ambitions of the Versys being adjusted upwards, we say to ourselves that we will take some additional odds and ends. With the old Versys, it was not very advisable to load it with suitcases and a top case. No more worry. The rear frame and the wheels have been reinforced. And presto, 30 kilos more than we can cram on his back. And more easily: look at the passenger handles. They’re bigger but that’s not what I wanted to show you. Just below … Kawasaki has integrated a saddlebag mounting system like on the Z 1000 SX. More practical, more aesthetic, and allowing the total width of the bike to be reduced by 100 mm once the valoshes have been installed.
Oh yes, about the width, I told you that the surface of the bubble was increased by 70%, and that we could adjust it to 60 mm without tools?!? And the tank? It grows too, and gains 2 liters. As the Versys is announced more sober and that the belly embeds 21 liters of benzine, the autonomy should make a more than noticeable improvement..

More daring, improved performance, and revised dashboard. The Versys has changed instrumentation … or rather stung that of the cousin ER-6n.
No revolution, just a few braking adjustments; a rear disc magnifying from 220 to 250 mm, new front calipers, still with double piston around 300 mm petal track, also a new caliper for the rear, a different material for the pads, and a lighter ABS module and more compact.
Oddly enough, overall progress has not translated into weight loss. The Versys has gained 8 kilos, and sees 214 kilos all full on the scale. The correction goes to 216 once the ABS is in place, and that can get out of hand with the catalog of accessories that Kawasaki has taken care to adapt: ​​suitcases (28 L) and top-case (47 L) to the colors of the motorcycle , LED fog lights, engine protection pads, hand guards, 12V socket … We would have liked it in series.

With a major stylistic overhaul, the 2015/2016 Versys will continue to fuel debates on design but bears witness to a visual dynamism that it really lacked. Improved on many points, it fishing only by weight gain. Limited, and its competitors post almost the same score. Note that it is available in version A2. 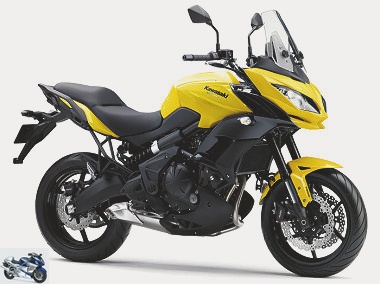 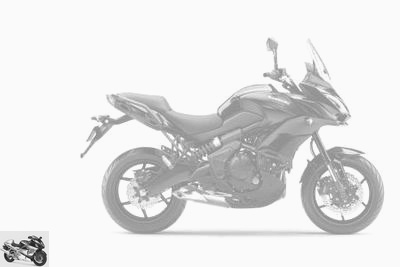 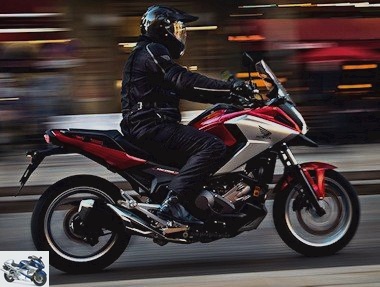 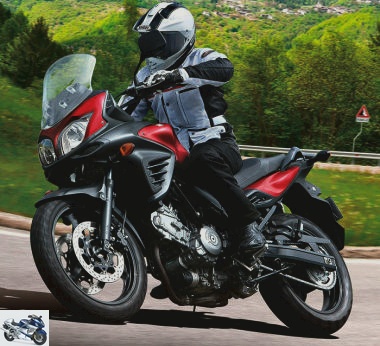 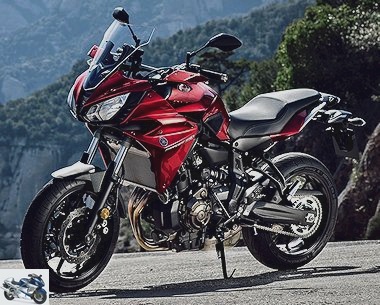 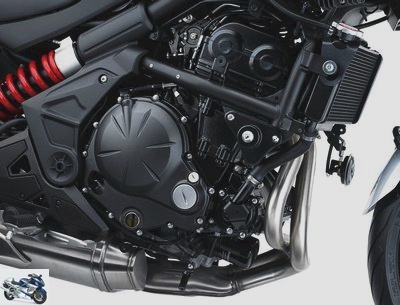 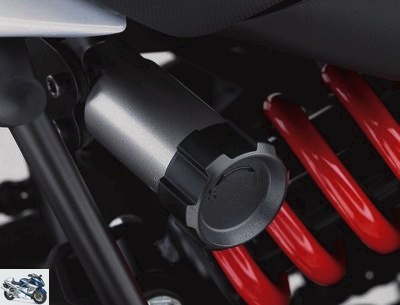 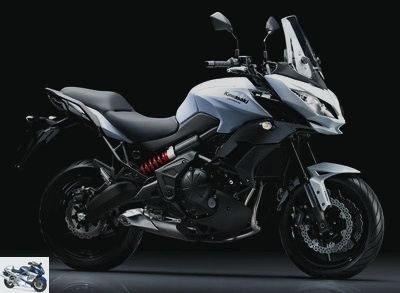 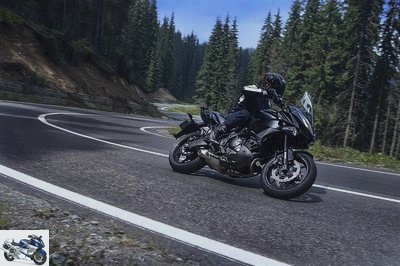 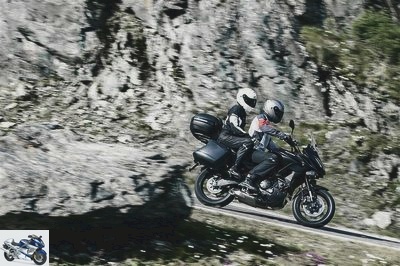 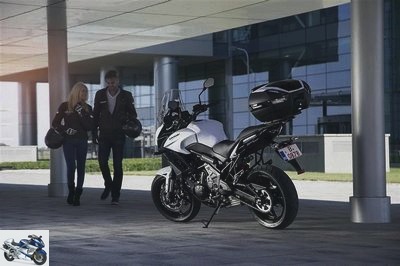 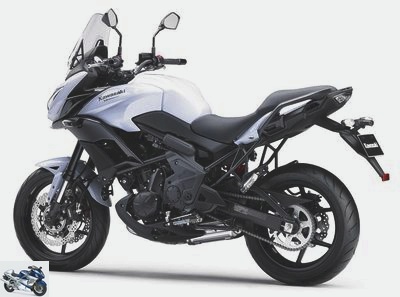 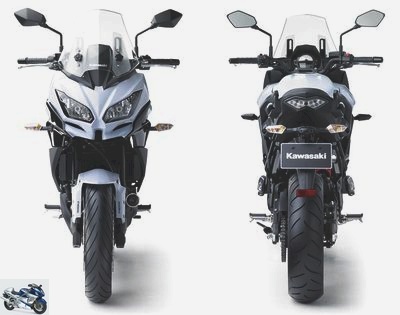 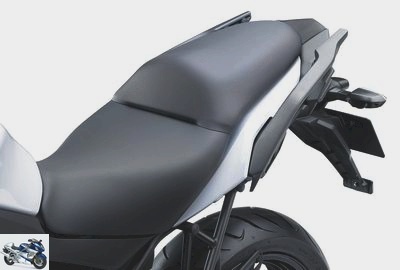 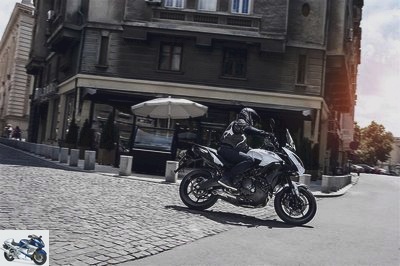 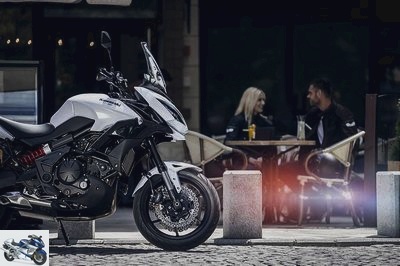 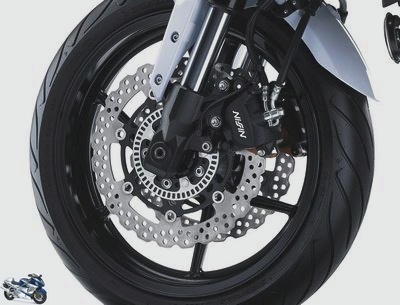 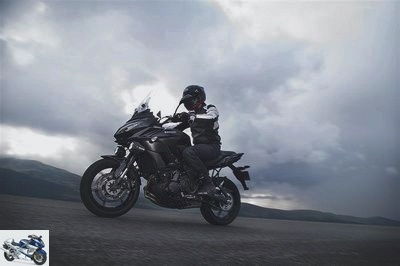 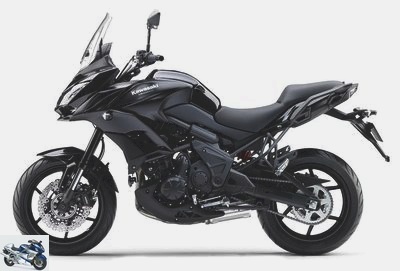 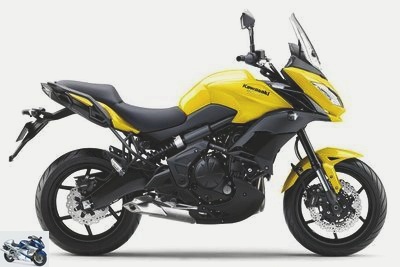 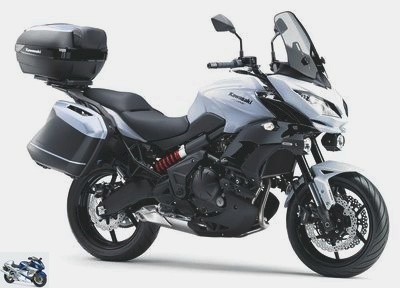 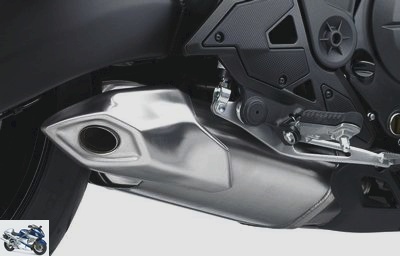 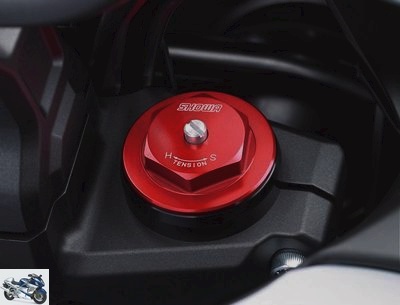 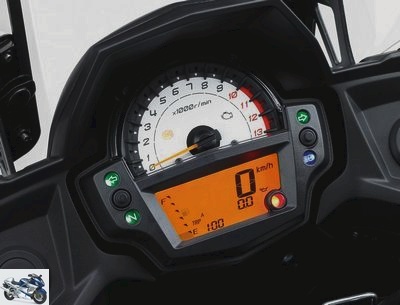 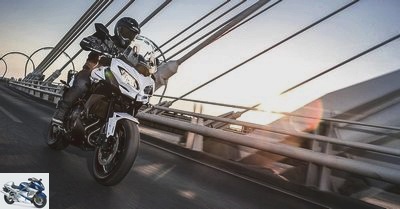 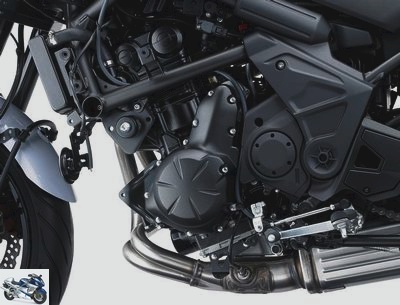 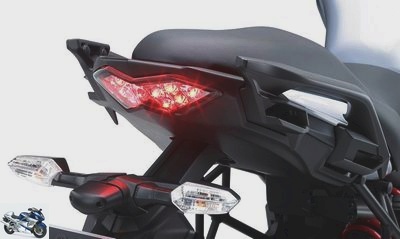 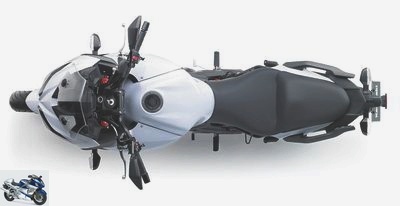