2006, the year of the successive revivals of Kawasaki on segments where we expected it less and in particular the road trail … sorry, with this new Versatile System we have to talk about "street surfing!" out of green marketing !

Since the time, we all forgot the Street Surfing, but the Versys did not stop evolving, including in version 1000 cm3 to arrive at a form of logic with the version 2020, in particular in terms of style. Forgotten the original specific inimitable style and direction the Sugomi style with a model more in the style of the other Kawasaki models and in particular the Z. But faced with the real new competing models, how does the Versys 650 still behave? Daily test… 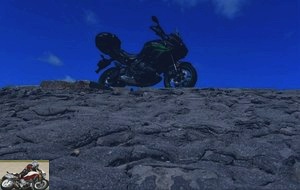 A road trail available in A2 version

It’s because she has a dog, this Versys, or in any case Sugomi in her. And like many mid-size models, it’s even bigger than it is. With its billhook-cut double optic and its encompassing fairing, one might even believe that it is an 800 or even a 900. We are now very far from the original Versys, just as much as from the ER6. and even more from the KLE which has made generations of bikers happy. 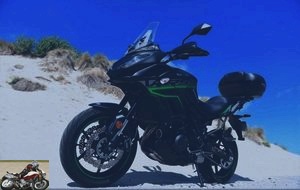 For the rest, we recognize the original chassis, housing the twin-cylinder of 649 cm3 identical to that of the now Z650 (no longer say ER6), but without much modification since the major evolution that the model experienced in 2015 and which broke. literally with the previous vintages and in particular the intermediate evolution of the Versys in 2010. At most, there is now an A2 version and this is good news for young drivers. It must be said that the twin delivers just 69 horsepower in its "full" version (compared to the 64 hp of the 2006 version), down compared to newcomers in the segment, such as the Tracer 700. But at least in A2 is 47.5 hp for everyone. 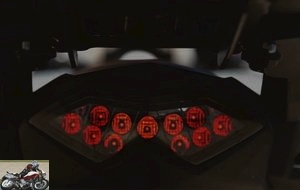 The Versys 650 is still as high as ever, with a saddle of 840mm! And the saddle is relatively wide, which does not help with small riders. Suffice to say that the 1.70m pilot like me will only put the end of both feet on the ground, or even one end of one foot on the ground depending on the road and the slope. In return, the 216 kilos all full facts remain reasonable and do not feel too much. The hands fall naturally on the handlebars with an upright position and relatively unfolded legs which will allow the older one to have a little space and not to feel too crowded.. 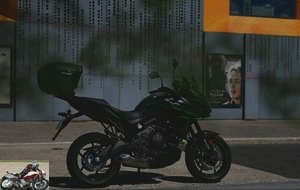 Under the eyes, we find a new meter compared to 2015 but retains both an analog and digital part. It’s a little more modern without reaching the level of TFT plates which are arriving elsewhere, but which also drive up the price. Speedometer, tachometer, fuel gauge, remaining range, eco mode, partial double trip, instantaneous or average consumption and clock provide all the necessary information in a legible manner. We just regret these two small buttons on the dashboard to scroll through the information not easily usable while driving. 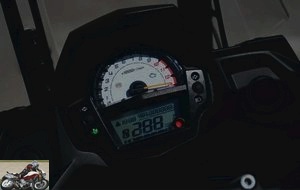 The twin snorts in a serious, rewarding and discreet way. The first turns of the wheels are easy, the engine being rather smooth under acceleration. 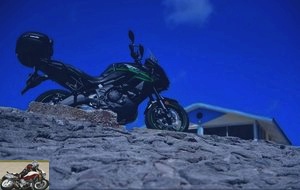 The trail accessible to go on a trip

The engine is relatively smooth for a twin, but with the character of a vintage twin, hitting well below 2,000 rpm, not liking low revs, which is easily the case in town. In fact, the engine is well above 3,000 rpm. The first is both a little brutal and the third already too long to wind up without knocking, which means that we will find ourselves more often in second in town, even in third but if possible at 50 km / h and not below (to be reserved for expressways at 70 so) … even if a few vibrations around 5,000 rpm and the sound of the engine make you want to change a report. By pushing the plug, we can manage to drive at 50 km / h in fifth (but not in sixth) but we never do it on a daily basis. We then appreciate the precise and gentle selection and the box in the broad sense. 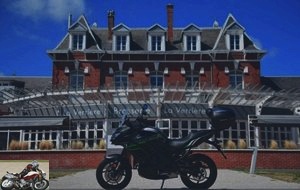 Flexible but bangs under 2,000 rpm in town

Once the concept of the good report found in town (the 2nd), the Versys easily slips between the lines without any particular effort, the mirrors passing happily above those of the cars. The maneuverability is at the rendezvous with a large lever arm which allows the U-turns in a simple and effortless way in a small street.

The duo makes the engine a little longer to react and asks to whip it more in order to have a little gnac at the start, a characteristic quite frequent on an average displacement but accentuated here. 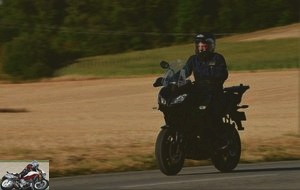 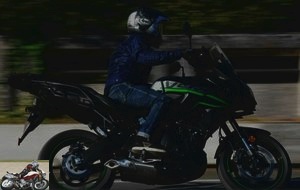 The bubble protects the bust well, even in the low position, the preferred low position because of the infrasound that the high position generates in the helmet … in the meantime, do not hesitate to adjust the bubble, simply with the two knobs before leaving for have it at its preferred height. Some motorcycles allow it to be adjusted on the driver’s side, which allows it to be adjusted while driving, which is not the case with the Versys. 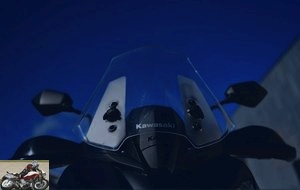 An easily adjustable bubble but not while riding

The small twin is revealed on the departmental side, on condition of whipping it and not staying low in the towers. Maximum torque at 7,000 rpm and maximum power at 8,500 rpm confirm that you have to be above 5,000 rpm minimum to extract character and start having fun with it from 7,000 rpm and thus not to remain with an impression of a machine rather placid than sporty, which it is not anyway. And then even the second goes up to 110 km / h at the breaker and is therefore already largely sufficient for departmental 90, not to mention that going to look for the breaker is useless. Suddenly, we will rather walk in fourth and we will go down a gear in third to get the towers and transform the quiet road into a party of pleasure..

The ground clearance is important enough then to chain the virolos in a fast and pleasant way while the Dunlop SportMax D222 do the job very well. The round profile of the tires and the trail give a simple, reassuring and particularly neutral driving which makes it all the easier for a young driver, with ultimately little difference in power between the 69 horses of the "full" model and the 47.5 hp of version A2 possible (but we tried the full version). 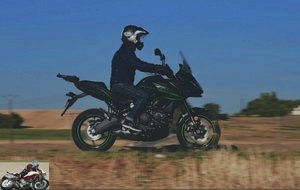 A twin that needs to be whipped

The Versys 650 is set very smooth from the outset. And when I say flexible, it’s really flexible, to the point where you sometimes have the impression of being on a boat with a clear dive under braking and swaying in the virolos. In return, we are on a flying carpet by erasing all the roughness of the road, a fact rare enough at Kawasaki to be noted. You will therefore not hesitate to adjust the rear shock absorber to the hardest, especially since the adjustment is done very simply by turning a dial. And you can also touch the preload and the stress on the front fork (each tube allowing to act on one or the other). And even at the harshest, the Versys remains comfortable (and much more than a Tracer 700 in particular) and clearly gains in precision, especially in fast driving.. 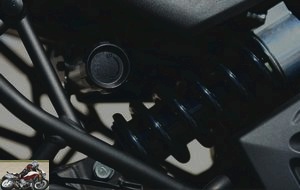 The rear brake brakes rather well, without excess, to be supplemented by a sure front braking, progressive, precise, with a good feeling and a power there when the two discs of 300m come into action. The beginner will appreciate a dosable and not brutal braking, especially since the ABS is not at all intrusive. 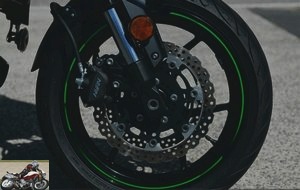 As has been said, the Versys is comfortable and even more so when the suspensions are set to ‘S’ for Soft, with a saddle that is rather soft at first. The limit comes after an hour and a half of driving where we would appreciate a pit stop, a stop even more appreciated as a duo, while with its autonomy, we can drive twice as long without stopping. What is good is that you do not feel the passenger in a duo on this motorcycle, the latter being practically at the same height as the driver, it does not generate any particular sway, which makes driving in a duo pleasant. . On the other hand, the duo immediately feels in terms of engine behavior, much softer when you put 50 kilos more to tow.. 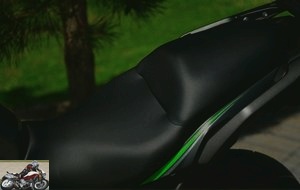 A rather comfortable saddle and a flexible shock absorber

The Versys 650 is a camel, with fuel consumption stabilized at 130 km / h at 5 liters per hundred, able to descend lower with a cool ride. It starts to climb to 6 liters when you are at 150 km / h. Suddenly, with the 21 liters of the tank (against 19 liters on the 2006 version), one can dream of a 400 kilometers of autonomy. However, the test, the gauge displayed the flashing reserve each time at around 275 km … but when we refuel at 335km, we only put 17.48 liters, so there are 3.5 and 65 km of autonomy still normally. It is not the 430 km of autonomy announced by the on-board computer when you refuel, but it is more than enough and good for a machine intended to make the road.. 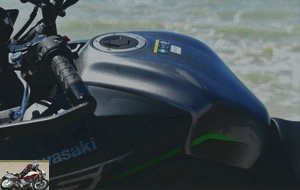 You can fit the mandatory yellow vest under the saddle, or even a specific U-lock. To leave, we will equip it with the 47-liter top-case of the manufacturer, large, even with 28-liter suitcases that can accompany it. The advantage of the Kawasaki Top-Case is that it has a single key for the ignition and the top-case, which is very practical on a daily basis. On the other hand, I just raged on the plastic opening pusher, really difficult and requiring a strong and prolonged press to accept to open.. 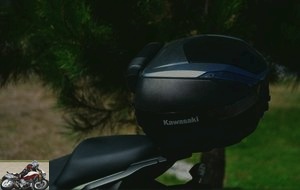 A top case opening with the same ignition key 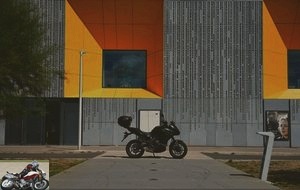 a trail that is easy to access, homogeneous, comfortable, economical, "affordable"

This Versys 650 has won the bet of a trail that is easy to access, homogeneous, comfortable, economical, "affordable" at 8,049 euros (for the segment) even if it has taken 400 euros more since 2015 (7,699 euros with ABS in 2015 and 1,000 euros compared to 7,100 euros when it was launched). Because opposite, we find the VStrom 650 at 8,399 euros (with its 70 hp), the Tracer 700 at 8,799 euros but with an unrivaled engine (better despite only 73 hp), or even as much as an NC750X to 9,149 euros when we tickle the 9,000 euros. We can choose the Versys 650 more readily in its Tourer versions, that is to say equipped with the top-case and suitcases (Grand Tourer) but which adds 1,900 euros more to the bill, even if there is additional lights included … and even if we saw promotions with discounts of around 600 euros on this model in the spring. And if, on the contrary, the budget is a little tight, we can turn to a simpler CB500X at 6,999 euros. In any case, with the Versys, we have a daily handyman, rewarding and who will take you far away in peace as a duo, even capable of having fun at times..