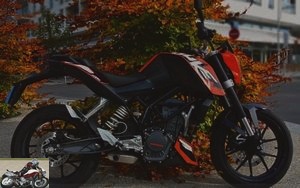 The Duke 200 looks like the 125 to be mistaken. Look, shape, difficult even for the informed eye to see the difference except for the 200 logo marked on the tank. And that’s normal, because the 200 shares the same technical elements as the 125, including the disconnectable ABS. We therefore find with pleasure a racy line, purely roadster, even hairy roadster. The engine is largely discovered through the tubular frame, the most beautiful effect, while the white rear white power shock absorber is highlighted by standing out clearly. Despite its displacement, the size has plenty to spare with a certain overweight, especially at the level of the tank, which enhances the model. 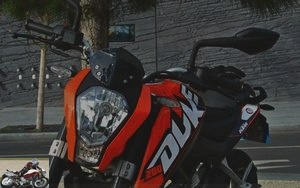 The oblong and almost vertical headlight contributes to the personality of the motorcycle. The tapered diamond-shaped mirrors as well as the turn signals counterbalance the general size by their finesse. The two-stage flat saddle – with a reduced ottoman for the passenger, ends up providing an apparently exclusive model, although there are two wide and long easy gripping handles. It all ends with an elegant LED tail light. The commodos are standard but light up! Their poutour is indeed backlit with a light white net, the most beautiful effect, especially at night. The finish especially is particularly neat, flawless. 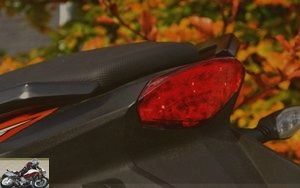 The feet almost touch the ground for the 1.70m pilot, despite a respectable height of 810 mm closer to a trail than a roadster. The saddle is thin on the other hand and counterbalances this important height. The saddle then provides a first impression of hardness but above all has side angles that hit the inside of the thighs noticeably when the bike is tightly squeezed..

The hands fall naturally on the rather wide handlebars, with a slight tilt forwards.

Under the eyes, we discover a 100% digital counter, orange backlit (necessarily) particularly verbose in information, especially for a model of this displacement: counter, baregraph tachometer, precise gasoline gauge with 7 sticks (plus 2 for the reserve) , gear indicator engaged, engine temperature, partial double trip, clock and above all a plethora of information provided by the on-board computer: instantaneous consumption, average speed, driving time … nothing is forgotten and as many information deserves to be on models of much larger displacement. Ready to race… 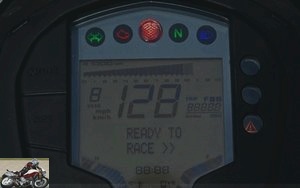 The mirrors, very aesthetic, on the other hand offer a rather reduced field of vision. If the counter is very readable in use, day and night, only the tachometer is not very visible to be really useful.

The engine snorts with a serious sound, pleasing to the ear. First, the single cylinder tows immediately or even vigorously with a needle that rises quickly beyond 7,000 rpm and we naturally pass the 2nd even before the shifltight turns on. Supported by a dynamic exhaust sound, the 200 immediately provides real impressions of speed and pick-up, much more rewarding than what one might have expected from theoretical figures alone. It is true that with 26 horsepower, the mill provides 11 horsepower better than the 125 and this is immediately felt, especially since it goes up very quickly in the towers.. 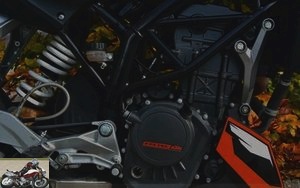 With a featherweight of 129.5 kilos and an impressive smoothness on a daily basis, the Duke 200 easily weaves its way through traffic with an ease further enhanced by an extremely short turning radius. The small mono is more particularly available at low speed and we find ourselves very quickly in town at indecent speeds capable of blowing up the license. In fact, the Duke is queen to start off with a bang and stop at the next traffic light on a stoppie, not without the front fork planing under the effort. Fun, we told you ! 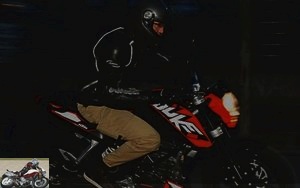 After the first impression of the hardness of the saddle, the shock absorber and the fork do an excellent job, gauged in particular by the faulty roadway and the rapid passages of gendarmes lying down with disconcerting ease, and almost in comfort..
The first real vibrations only arrive around 7,000 rpm and we then start to shift gears naturally in town, even up to fifth to reduce the effects. It is all the more possible that the KTM accepts without reluctance to evolve in town on the last report to 50 km / h and only 3,500 rev / min. Particularly docile, the mono even accepts to wind on the last report at 2,000 rpm.

Suddenly, it is the pilot who chooses the range of use, between the first which arrives at the switch at 45 km / h and the sixth at the same speed but at 3,000 rpm only. 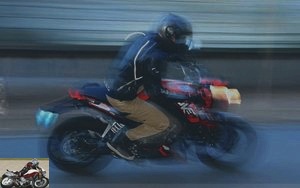 The Duke engages strongly on the highway while the engine howls to climb in the turns with a sound more acute than in city to stabilize rather quickly at 125 km / h (135 km / h meter) … with a top speed barely better than 10 km / h compared to the 125, despite a particularly long sixth gear. It must be said that the fifth rupte at 115 km / h and that it is necessary to pass the 6 to improve the top speed.

The engine is really made to send very early and very quickly, and a little less made to offer a top speed … useless anyway in the spirit of the 200. On the other hand, it offers excellent handling and heading. , same grip on the cleat on this ground. 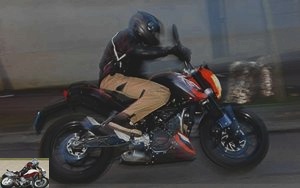 The Duke 200 therefore returns with delight on departmental roads to unveil a precise front end and a flawless curve placement. With dynamic mid-range pickups, it offers renewed driving pleasure at every turn, especially since it accepts everything, and especially last-minute improvisations. Between 3rd and 4th gear, the 200 likes it and sends with delight what it takes to play from one turn to another. 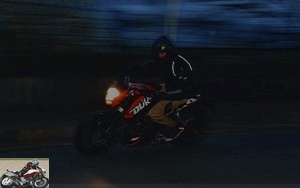 The front brake offers excellent bite and a good feel, proof of the excellence of the Brembo calipers and the efficiency of the 300mm disc. It could even confuse a beginner who would take it too hard. The rear is not to be outdone despite a simple 230 mm disc. Difficult to block in the dry, a single and too violent grip in the wet will result in a nice comma, perfectly controllable, even a source of sensations on the contrary. 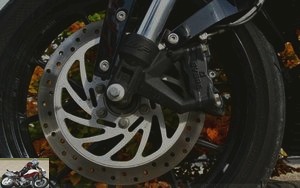 The Duke offers large, easily gripping passenger handles. On the other hand, the footrests placed high enough, will remind more of a typical sporty position than a roadster and therefore tiring in the long run.. 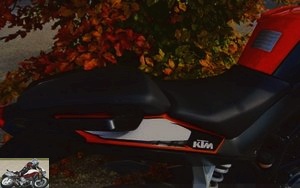 The instantaneous consumption provided by the computer indicates a consumption varying between 2.5 and 5.5 liters per hundred, depending on the driving, with a reduced average in urban driving of 3.5 liters. The pump confirms the accuracy of the information provided by the computer with an overall autonomy of more than 300 kilometers also thanks to the "large" tank of 10.5 liters. 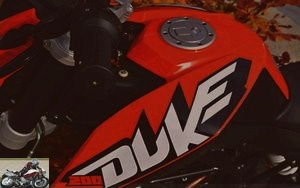 The passenger seat rises to allow the placement … of a disc block and no more. It also lacks hooks to more easily secure a bag.

The lighthouse offers a beautiful beam, powerful and efficient at night, reassuring. 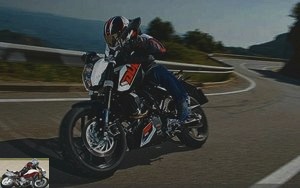 Lightweight at only 2.5 kilos more than the 125, but with 11 more horsepower than its little sister, the Duke 200 is perhaps the ideal displacement of the young driver … with unparalleled ease of handling and enough fishing to provide daily pleasure, unlike the 125 quickly limited in its inclinations. Although predisposed to a distribution in Asian countries, it would deserve a much stronger distribution in Europe, if it weren’t for its price of 4,290 euros, logically placed in relation to the competition, but a bit high when it is not necessary more add much to acquire some 500 or 650.

The technical sheet of the Duke 200