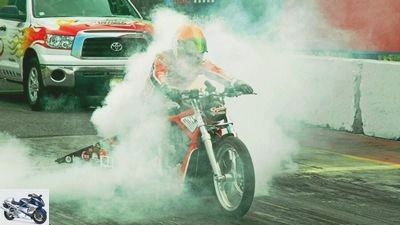 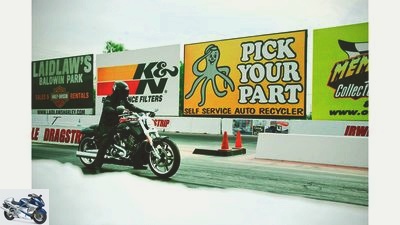 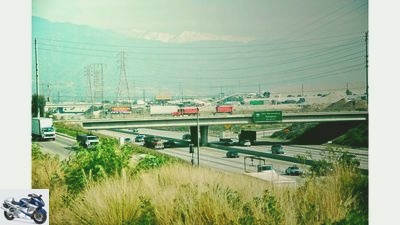 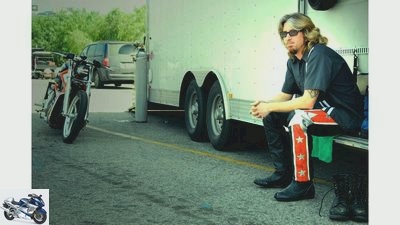 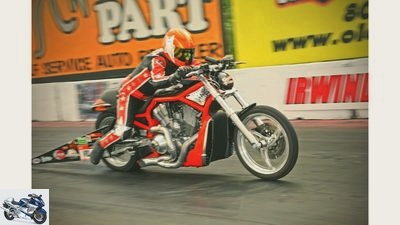 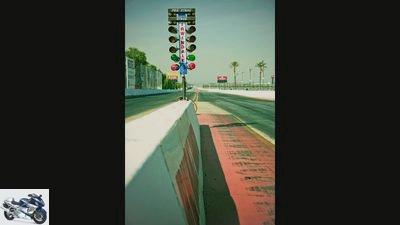 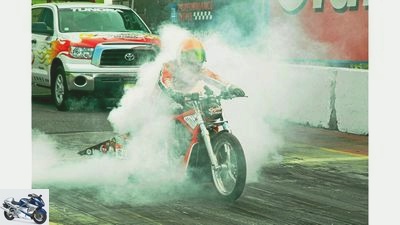 6/12
The burnout before the start brings the tire up to temperature so that it grips better afterwards. 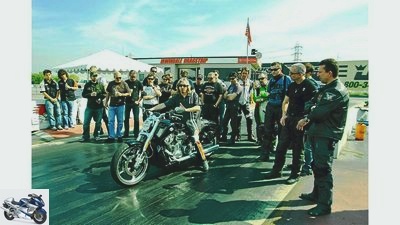 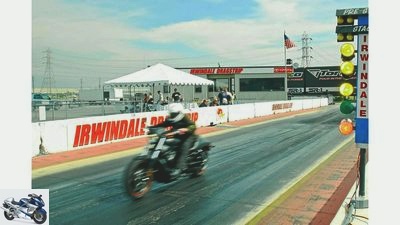 8/12
During the launch, the world holds its breath for the blink of an eye – everything was right this time? 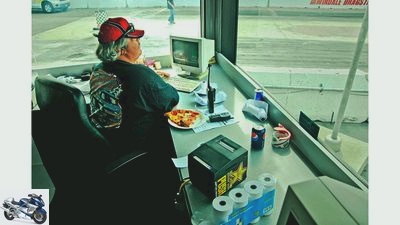 9/12
Fat Mike and his pizza – the duo ruled the Irwindale Speedway just outside Los Angeles. 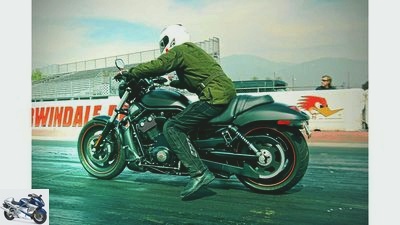 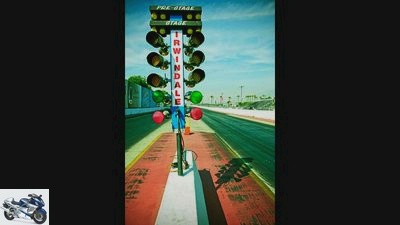 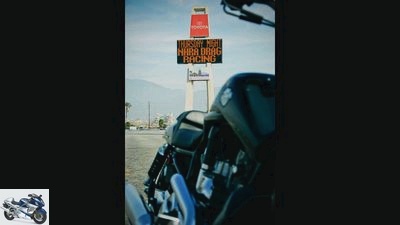 Life: Dragster racing as a self-awareness

Dragster racing as a self-awareness
The principle of hope

In a dragster race, the driver has to do a lot right in a very short time. Or he does more wrong. At the first attempt the fear is still in the neck, at the second already on the pillion seat. At around 400 meters, it’s actually about nothing. And yet by thousandths of a second – an eternity.

In the beginning there is the tree, that strange kind of traffic light. And at the end, the running time is on a large display board. In front of it is scared, behind it the assumption: Drag races are actually not about acceleration. It’s about something completely different, something that doesn’t even express itself in speed. It’s about something that takes a back seat to the spectacle but carries the whole spectacle: hope. A self-experiment.

Dragster racing as a self-awareness
The principle of hope

Things get interesting when the fat man is through with the meal. He’s just chewed down a huge rag of salami pizza from his fluffy left hand. His tongue is still searching for sausage and cheese residues between his teeth, and he says: “Some people need a lifetime to know who they are. But here, here you can learn a lot about yourself and life in just a few seconds. “

Until then, the offer to try yourself on the dragstrip, if only with a production Harley, seemed to allow for exactly one sensible choice: pinch. Why shoot a few hundred meters straight ahead, tear through the aisles without coupling, bend behind the handlebars, for heaven’s sake don’t tear the projectile, on the right a concrete wall, on the left, a little further away, also a concrete wall – why? What would this amount to if not some stupid act that promised little beyond a frightening number of chances to be ridiculous? But things looked different now, at least if the fat man with the mustache was right.

Mike the fat man sits in an air-conditioned tin house with tinted windows and tasteless blue carpeting
in front of an old computer, the peaked cap pulled down over his face. The man is the starter in Irwindale. Between a few highways, the spoil heaps from gravel pits and power lines that meet next door in the substation, the Irwindale Speedway is concreted over a large area in the gray-brown desolation in the Los Angeles area. Not a bad setting for a Tarantino film and the ideal area to dump mutilated corpses out of the moving car in the tough grass ditch at night.

A short man with long hair and sunglasses is standing in front of Mike’s starter house in the monkey heat. Gene Thomason is usually not someone who takes his time. The others take time while he hurries so that the others take as little time as possible. Gene Thomason is a drag racer. Whenever he doesn’t speak, his lips are a line, and when he speaks, he gives his gaze something meaningful. His expression does not escape the seriousness also because he has to explain something very serious, namely how to behave on the drag strip without causing serious damage. Or to take.

This includes not standing around for too long anywhere, even without a motorcycle. Around the starting line the asphalt is covered with a glossy black rubber layer. Before every race, this surface is prepared with a nasty adhesive spray that does not evaporate for weeks. So the short man moves his feet every few seconds while he lectures. Otherwise the shoes will stick.

Actually, Gene, who as a drag racer called himself Super-Gene, doesn’t teach at all. He talks about a group that was with him a few days ago that was also glued to the rubber and sweated in the bright sun. When Gene tries to teach a new group the secrets of drag racing, the first thing he does is list what the group did wrong before. Above all: not listening to him properly. With priestly urgency he formulates sentences that often begin with “Don’t try …”, “Always make sure that …” or “You absolutely have to, otherwise …”. In essence, what he says boils down to the fact that it is actually not difficult to drive straight ahead quickly. Any fool can do that. But not every fool can drive straight ahead really fast. It’s a lot less primitive than it looks, but all the more dangerous. You have to do a lot right in a very short time. You could also say that a lot can go wrong very quickly. “Reacting quickly means reacting incorrectly very quickly. Then you focus on responding correctly. And reacts too slowly. “

At the start you have to be calm and relaxed and “settled in a nice rhythm”, he says and makes soothing gestures with your hands to illustrate. Otherwise you could leave it the same. “Do not think. Feel. Do, ”says drag racer Gene. “It is all in your head” – it all happens in your head.

Heat and fear sweat mixes under the jacket

That is true, however. There is far too much going on in this head right now. And the thoughts at this moment are nothing more and nothing less than the expression of scared. For example, before screwing up the burnout. If it’s the first burnout ever in life, that doesn’t make you more relaxed. Humans can function very precisely under great tension. But it doesn’t have to be that way. Sometimes even the simplest processes get mixed up under pressure. Who has never confused right and left? That sort of thing happened quickly. And then you let go of the brake on the right instead of pulling the clutch on the left again. And it can’t be that the tire doesn’t spin at all when the clutch engages at 7000 revolutions?

This Gene had no doubts about it. “The clutch,” he said, “can withstand power, but it doesn’t want any heat, so just let it flap and the tire goes from 100 percent to zero percent traction instantly.” Sure? Stifle, fall over, get awkward, hobble away, hit the hook and end up miserably in the concrete border after a pitifully clumsy two-wheeled ballet – there are no such narrow limits to the imagination. A funny octopus smiles from a billboard the size of a house. She is promoting an auto recycler. He’s sure to take motorcycles too.

In the suit, the heat sweat mixes with the sweat of fear, the mouth is dry, the stomach is restless. The time has come. The guy at the burnout puddles waves his index finger briefly at waist height. This is the sign, the route is free. The machine slowly rolls through the water. Behind it, the right hand clamps on the brake lever and brings the speed to 7000. The left hand holds the clutch clearly shakily. Another sticky swallow, then let go. It jerks briefly and – the tire is smoking, very calm, very unspectacular.

In the cool of his air-conditioned house, fat Mike types in the start number. He watches as the two pre-stage lamps light up on the tree as the front wheel crosses the first of two light barriers at the start. Nothing can happen yet. Messing around with the visor. The nose itches. Adjust again in the seat hollow. Hot in the helmet. Do the hands know what to do? May be. Can you breathe out the tension? No. Feeling forward, centimeter by inch, leaning forward over the handlebars – what if your feet don’t find the notches at all? Another centimeter further, not too much gas, two fingers are loosely on the brake, the wrist is pretensioned like a spring, speed 4000, second light barrier, the heart pumps in the throat, the stage lights come on – and suddenly, a lot suddenly the whole tree is on fire. Come on!

“When it comes to drag racing, we don’t think in seconds”

The run flies like a sneeze shoots out of the nose: rapid, violent, liberating. Later, on a small piece of paper, it looks like a sloppily torn off receipt, five numbers: reaction and start time, 100 meters and total time, including the speed at the finish. The numbers show whether it was a good run or a bad one. This one wasn’t bad. He was really bad. And that’s why it’s good. A somewhat mediocre run might have been the only one because it could be accepted and ticked off and forgotten. The very bad one. More must follow, less excited, better ones. But: everything never goes perfectly, something always goes wrong. And maybe because that’s the way it is, you want to, no, have to try again and again and again. The next time you start better, less speed, more concentration, don’t go back into the limiter, shift earlier, tear open faster, up to the stop. All of this is true, but the time on the note is again incorrect. Because you missed the second switching point – always the same. And yet always different. “When it comes to drag racing, we don’t think in seconds. Even a tenth is a whole day here. We think in thousandths, ”said the serious Gene at the beginning.

So the numbers may be similar, the running times that shine on the large display board at the finish. But the runs themselves never do that. That is why the hope remains for the one run par excellence, for the ideal attempt in which the world runs the other way around: perfect. That is the hope that keeps the drag racing spectacle so exciting – for everyone at the start as well as for every spectator.

How fast could you be? What number would show that the world held its breath for a few seconds because you did everything right that one time? The world lasts only seconds on a tree, and life is four hundred meters long. Where do we come from Where do we go? Begin. Goal. Quickly. Perhaps. Maybe next time. It’s not acceleration that drag races are about. So that was what Mike, the big starter, meant. He was right. And I didn’t pinch.