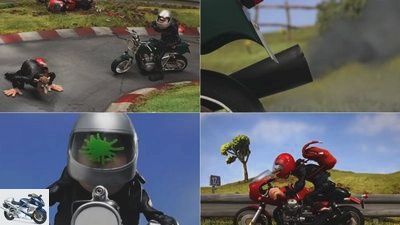 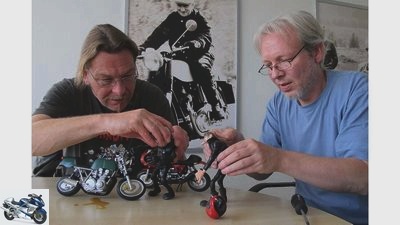 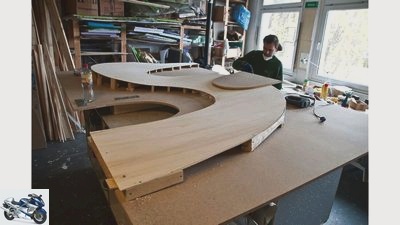 2/23
For the race between Holli and Bernd in the film “Nurburgring”, the model makers created a stage that is around two by five meters. For special effects (e.g.. Rauch) was used to post-process the computer. 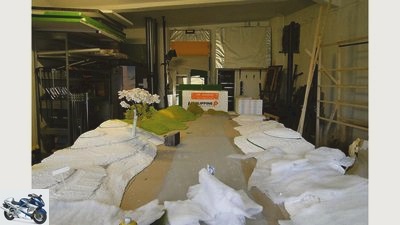 3/23
The backdrop still looks quite colorless. 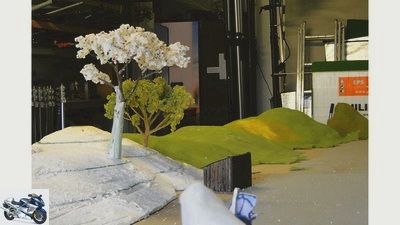 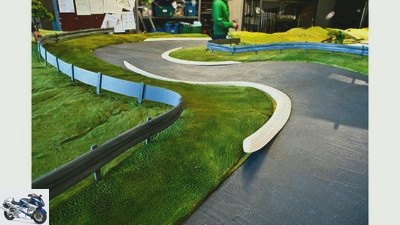 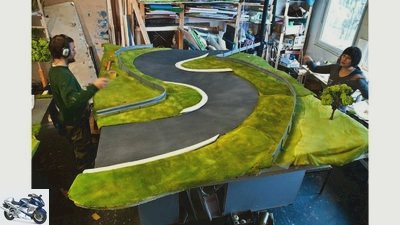 6/23
The racetrack in the finished state. 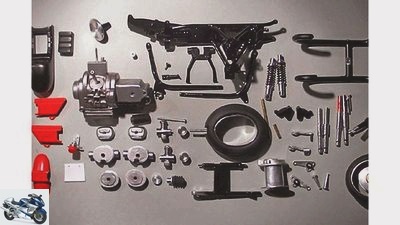 7/23
Holli Hatzenbach’s Moto Guzzi Le Mans, used in the third film, was complete after “only” five weeks. The shape of the fairing and the windshield served as a mineral water bottle in their previous lives. 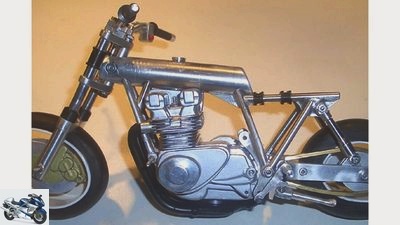 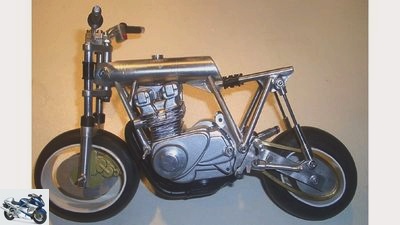 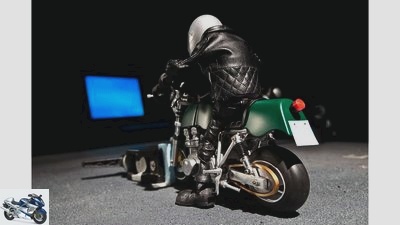 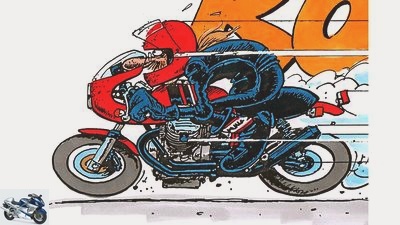 11/23
And from such comics, a film should now be created. 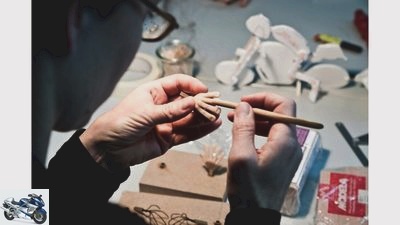 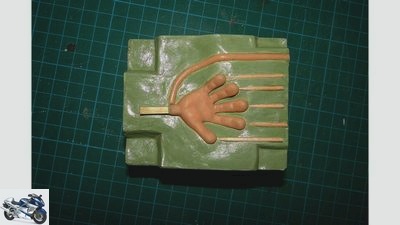 13/23
The comic templates with their big hands and feet on thin arms and legs are very suitable for a film, as they allow great mobility. Fat, compact protagonists (e.g. Garfield) are much more complicated to put into perspective. 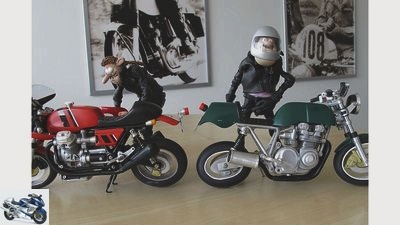 14/23
This is what the figures look like when they are finished. But it is a long way to go. 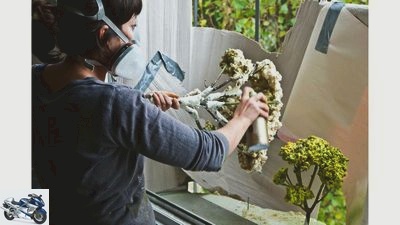 15/23
Construction foam, popcorn and green paint from the spray can – this is how the trees for the background scenery are created. 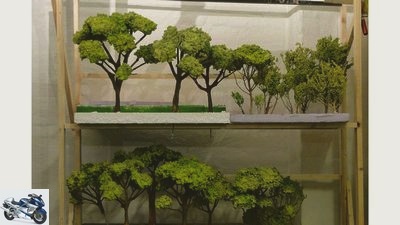 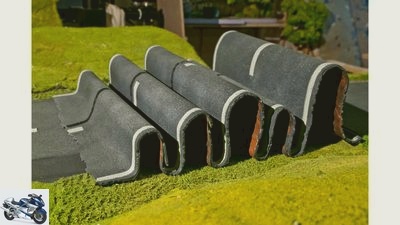 17/23
Green-colored artificial fur forms the lawn, and the roadway in “mega-iron” also has a hardware store past. 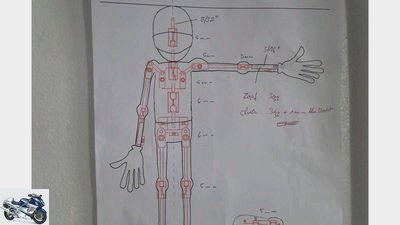 18/23
The figures are planned down to the smallest detail. 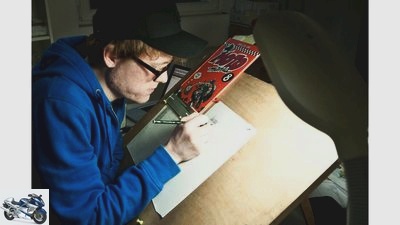 19/23
The professionals of the production company TRIKK17 translate the comics into storyboards (scripts) in extremely time-consuming work. 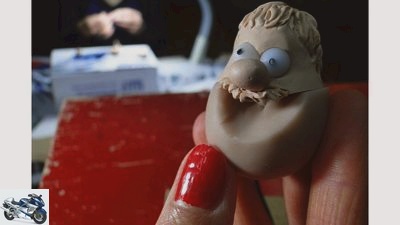 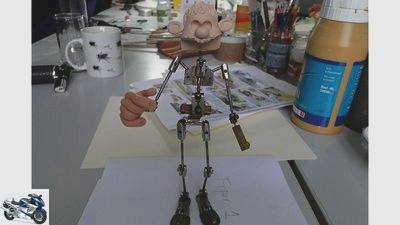 21/23
Stable construction: Instead of hard-wearing plasticine models with a wire core, solid ball-and-socket steel skeletons with ball heads ensure that the roughly 20 centimeter high figures survive even the toughest continuous use. The mechanical masterpieces were manufactured by a specialist company in England and are now awaiting further film appearances. 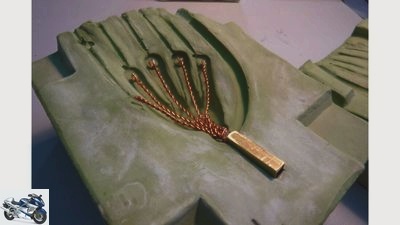 22/23
Finger, done: a professional doll maker took care of even the smallest details. Thanks to the wire innards, the rubber hands can move freely down to the fingertips. 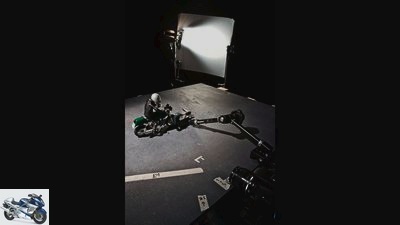 23/23
Makes around 1700 different shots for the longest Motomania film.

+++ UPDATE August 11, 2014 +++ The fifth Motomania clip “When it pulls behind” is there +++ comic films, each around a minute long – that can’t be a lot of effort. It can. At least when only perfectionists meet. Two of them also made perfect nonsense at the MOTORRAD interview.

When it pulls behind

“Sometimes someone has a yellow shower head?” The somewhat irritated Detlev Louis management tries to help out with cola or mineral water. No, it has to be a yellow shower for Holger Aue, because only then would the planned puller alarm scene look real enough. Okay, not a yellow shower head. Cartoonist colleague Martin Perscheid spontaneously reaches for the coffee cup and desecrates the Louis conference table with leftover caffeine. “Then we’ll lose oil on the Kawasaki!” The management looks a little more confused, but makes a good face to the somewhat silly game, because the two big, not so young boys here and now for the first time have the opportunity to meet the original – Playing around with the protagonists of the Motomania films. So far, Messrs. Aue and Perscheid were only allowed to view the assembled people and machines on a scale of 1: 9 in the film studio. And don’t touch it!

Motomania films? There are already three of them, each around a minute long, so not really full-length. But still incredibly elaborately produced, because in order to transfer the comic character of the Motomania stories as faithfully as possible into moving images, the creators decided on the stop-motion technique. A process in which real figures are moved a little further from picture to picture (and of which you need 25 pieces per second of film). Readers with a little cinematographic education may know this from the “Wallace & Gromit “films.

All just a coincidence

The whole thing wasn’t Holger Aue’s idea. It was pure coincidence: Louis communications man Bjorn Ahlers had a private chat with an acquaintance about motorcycles and comics. Said acquaintance turns out to be a filmmaker of the renowned Hamburg animated film production TRIKK17 (www.trikk17.de). One word leads to another, and Bjorn can imagine that his employer, Detlev Louis will loosen up one or two euros for a comic book adaptation. Bjorn calls Holger Aue. Holger is enthusiastic, speaks to his publisher and the studio people. It is now summer 2012 – the Motomania film project is actually picking up speed.

Now it is important to find the right stories and check whether they can be filmed. 20 stories are shortlisted. “Mega iron” with the nitrous oxide injection and the rolled-up lane is set; “Correct” and “Nurburgring” are the names of the other two stories. English professionals take care of the construction of the main actor’s skeletons, body structure and dressing – all clothes are tailored by hand – the Hamburg model-making experts take care of.

The first major challenge arises: The TRIKK17 makers are gifted animators, but they are not motorcyclists. The difference between a classic leather two-piece suit and a protector suit? Not really known. Knee closure or hanging off? Doesn’t mean anything to the filmmakers either. Holger provides those who are still ignorant with photo and film material, and the lead animator spends many nights playing Isle of Man DVDs. Everything will be fine: The troop learns very quickly and very well.

Cartoonist Perscheid in the boat 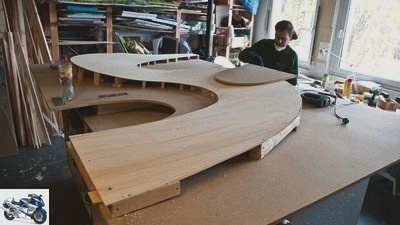 For the race between Holli and Bernd in the film “Nurburgring”, the model makers created a stage that is around two by five meters. The computer was used for post-processing for special effects (including smoke).

And it gets even better, because Holger Aue chats casually about the upcoming film project at one of the regular meetings with his cartoonist colleague Perscheid. Perscheid’s reaction is as clear as it is determined: “I want to build the motorcycle models!” A request that the filmmakers initially viewed somewhat critically. You know Martin Perscheid as a draftsman who, with his often wonderfully evil works, is one of the most famous cartoonists in Germany, but you have not yet noticed him as a model maker.

What should change quickly, because after a merciless introductory offer (“From an economic point of view, I should have turned it down, but I wanted the job!”) Perscheid is on board and convinces with perfect work from the start, for which the term model building Insanity would actually be a lot more accurate. The making-of link at the end of the text takes you to a model building blog in which Perscheid describes the origins of Rau-Kawasaki and Moto Guzzi Le Mans down to the smallest detail – absolutely worth reading and seeing, but a lot please Bring time.

The Kawasaki will be finished first at the end of 2012, so the two films with Bernd “Brembo” Breidscheid will start shooting. The third episode “Nurburgring”, in which Holger Aue’s alter ego Holli Hatzenbach duels with Bernd and Kawasaki on his Guzzi, forms the (hopefully only temporary) conclusion of the Motomania films. The actual shooting takes three weeks, the fine editing is done on the computer, a few details such as smoke and backgrounds are also inserted electronically. When it comes to sound engineering, classic micro or mouth work is the order of the day. The Guzzi sound is provided by Holger’s real Le Mans, and the (manageable) text by Holli Hatzenbach is also spoken by its creator himself. Right on time for the start of the 2013 season, the three masterpieces will go online via Louis’ digital appearance and via YouTube. 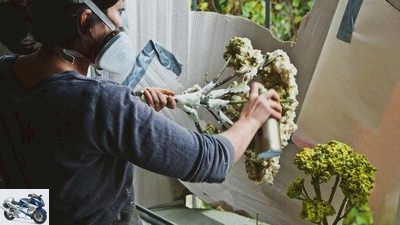 Construction foam, popcorn and green paint from the spray can – this is how the trees for the background scenery are created.

A few small mistakes crept in. Holli Hatzenbach does not wear gloves at the Nurburgring race, and a motorcycle accelerates even though his hand is not on the gas. But that’s not really annoying – they are comics.

It has not yet been decided whether there will be sequels, as each film costs a whopping five-figure amount. And that doesn’t even take the model building costs into account. The click numbers, however, clearly speak in favor of further Motomania films. The two cartoonists and the film studio would definitely be there again. Now it is up to the film sponsor Detlev Louis whether the story continues. The rider and motorcycle models that are made to last also clearly speak for further consequences. The conference table, which was very slightly damaged, may speak against it. But only a little – maybe a good thing that no yellow shower head was in stock.