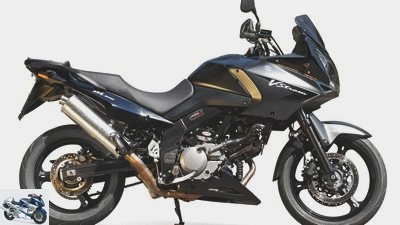 Even in the times of bits and bytes, they still exist, the classic tuners that turn, mill, drill and grind on channels and camshafts. Christian Mende is one of them – a former racing driver and owner of a small but fine tuning workshop.

Christian moves in with the lathe and milling machine Mende his objects still by hand cutting on the skin. These can be current super athletes, or even a well-hung naked bike. Even before an old classic, the fine screwdriver doesn’t shy away from it.

At first glance, it seems rather unusual to help Suzuki’s travel enduro V-Strom 650 on the jumps. But after all, the boss himself drives the Japan V2 privately: “Why? Okay, it doesn’t exactly knock you off your feet, but it’s a great machine on the side streets here in the Weser Uplands. ”If only it had a little more smoke, the tuner thought on his excursions. Which led to the fact that he now offers three different tuning kits.

MOTORRAD drove the medium version with only a slightly larger displacement, the price of which remains somewhat on the carpet. But, of course, new pistons two millimeters larger are not enough. The mechanical processing of the ducts and valve seats as well as the regrinding of the series camshafts to sharper control times is complex, but brings a lot. Despite all the enthusiasm for technology and mechanics: Tuning is unthinkable today without electronic intervention. Christian Mende makes a rough adjustment of the on-board electronics on his own test bench, but the decisive fine-tuning happens on the road: “Then I drive through the countryside with the laptop for hours, stop every few kilometers and first reprogram the lambda probe according to the measurement protocols. But in the end it is not the measured value that counts, but the feeling. ”It quickly became clear that the standard injection with double throttle valves – one mechanically operated by a Bowden cable, one electronically controlled – limited the performance potential. So the servomotor operated throttle valve was eliminated; the engine is now controlled solely by the throttle grip and a single throttle valve.

Which has a disadvantage in practice: This means that the choke system housed in the primary throttle valve housing no longer works. As a result, the engine takes half a minute to maintain idle speed without stalling. Even at a standstill, it is noticeable that the drilled out V2 is much more direct and lively on the gas, which also has to do with the compression increased to 12.9 and the sharpened timing.

But first of all, the engine works more acoustically in city traffic because of the slim accessory exhaust, but otherwise quite inconspicuously. No capricious idiosyncrasies, no swallowing and no hiccups. At the city limits, however, he is allowed to show what he’s made of.

The bored-out engine does the sprint to country road speed much more dynamically than the series V-Strom, it has its strength like the series engine in the middle speed range, only with a lot more power and thrust. Mende: “There could be more at the top, but I’ve reduced the performance in favor of the characteristics and stability. Five horsepower with an increased speed limit would also be no problem ”. But they wouldn’t necessarily fit better with the character of V-Strom. The 677 cc twin develops considerably more torque than the standard engine in the entire middle range, pushes out of the curves with more verve and pushes considerably better, both tangibly and measurably. And all of this without sacrificing significantly in terms of running smoothness and suitability for everyday use. A successful case of classic tuning.

So that the chassis corresponds to the sportier character, a WP shock absorber was installed and the fork was tuned tighter. Both spring elements work without excessive hardness. So it’s a well-rounded affair, the Mende-Suzuki offers increased enjoyment without regrets – one can speak of successful tuning.