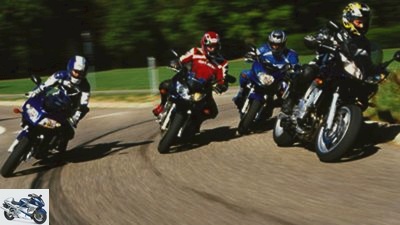 The sun is shining, the early autumn beckons: away with pencil or tool, off to the countryside. On two wheels, of course. Making blue is very easy? this is shown by the manufacturers’ grip on the color shelf. It is more difficult to decide which all-round bike it should be.

The new Fazer is a really good bike. Tiles extremely stable over the autobahn at 220 km / h, is unshakable in fast corners and, when things get tighter, offers decent comfort even for hours thanks to its finely appealing spring elements and the relaxed seating position. But where there is a lot of light, there is also shadow. The Yamaha is not super handy. And those who drive them have to like high speeds. Because the ideal country road engine looks different (see SV 650 S).

Right at the front in the engine ranking, with the chassis with the music, in the safety chapter well in the race: Even if the SV loses a few points here and there, it is an all-round successful motorcycle. Except for the issue of comfort. The sporty seating position is not for everyone. If you like the humility attitude, you should grab it without hesitation. But even those who prefer to sit upright don’t have to do without the SV feeling. There is still the civil version without the S suffix.

The ZR-7S is getting on in years, no question about it. But the Kawasaki still has its qualities. Not nearly as agile as an SV 650, not nearly as direct and greedy as a Fazer. But blessed with a calming serenity. Comfortable, easy to drive and seldom thrown out of step even in difficult situations. Nevertheless, it is no longer enough to reach the top in the points evaluation. To turn blue spontaneously, on the other hand, always.

Is it because of their reputation, their charm? Or does it offer its buyers exactly what they expect? The fact is: The Bandit is an old motorcycle, and you can see that especially when you compare it to the fresher competition. Not blessed with the increased displacement of the ZR-7S and not with the advantages of modern motorcycle construction, it cannot compete in almost any discipline against its sister SV 650 S and the new Fazer. Except in everyday suitability. But maybe that’s why it’s so popular.