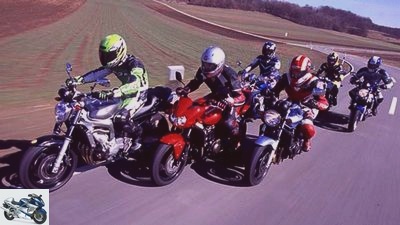 Middle class ?? the term has something disrespectful to some. All he says is that there are other motorcycles besides this class. More expensive or cheaper, with more or less power. So what? Many can find their best motorcycle in the world, especially in the diverse Middle Kingdom.

Now it is Yamaha FZ6 has arrived in the 78 hp class, and in terms of power delivery it has better performance than the established competition from Honda and Kawasaki just can’t shine. “That’s the way it is,” some will say, “but there are still a few motorcycles missing anyway.” Correct, the new Suzuki Bandit 650 / S with water-cooled engine and the revised SV 650 / S from the same company, the ones with dual ignition, Euro 3 compliant and ABS go into the new season. And perhaps some who do not look strictly at the insurance classes would also have liked to learn something about the successors to the well-established Honda Hornet 600 and Kawasaki Z 750.

MOTORRAD would have liked to be of service, but unfortunately these motorcycles are simply not available yet. At the beginning of March, Kawasaki will fly in the European version of the Z 750 in a forceful transport logistical campaign and ship it to the dealers, roughly at the same time as the Hornet is delivered. The Bandit and SV 650 are only announced for mid-March, and then at the latest, large and comprehensive comparative tests will be carried out.

In the meantime, those interested can take a look at the following market overview, which not only includes naked or barely disguised street motorcycles, but also offers a very wide range from fully equipped tourers (Honda Deauville) to various cruisers and retro classics from Triumph. And despite their differences, they have one thing in common: They are uncomplicated and make driving a lot of fun. In this, the medium is really top class.

The two-cylinder already took care of the
SV 650 for a large fan base. In
he successfully continued his career with the V-Strom. Because the Twin has the best all-round properties and a good portion of flavor. If you want it, you drive
with the small Suzuki, the large-caliber travel enduros in tight bends cheekily off. The revised 2007 version scores with an ABS brake.

Naked optics, powerful technology, Italian flair – the concept that Ducati Put on two wheels in 1993 arrives. The Monster series is developing into a successful long-runner. The 900 monster, which is much more active than its little sisters, is considered an ideal joker. The offer is manageable, the prices are high. In return, there are well-maintained machines for enthusiasts.

You now know what the market currently has in store. You can find out here which machine suits you and what other attractive models the second-hand market has to offer.

The offer on the previous pages is really not bad. The whole thing becomes even more exciting when you look at the second-hand market on top of that
affordable models. Take one for example Buell X1 Lightning. They are now available used and well cared for for 7,000 euros. Some people who consider a new Honda CBF 600 but reject the idea of ​​the arbitrariness of the model could succumb to the charm of the rare US bike. When it comes to driving fun, dynamics and handling, top sellers and exotic are definitely on the same wavelength.
MOTORRAD has put together a selection of interesting bikes for you on the following pages – new and used. The spectrum ranges from the very affordable Hyosung GT 650 to the V2 models alone Harley-Davidson Sportster 883 that hardly loses value even after years. To you
make it easier to decide which model is best to use
If you like, we have divided the machines into five categories: Motorcycles with a particularly high fun factor or for
absolute low price; Machines that are traded as exclusive pieces or permanent investments with stable value and all-rounders,
which are just as popular on the home route as they are on the Alpine tour.
Under the special MOTORCYCLE tips you will find a smaller one in the
Image noteworthy alternatives. And suddenly your dream bike is in front of you and you have the key in your hand.

The Japanese have to cope with that first. Because now they too are being copied. The Hyosung GT 650 is modeled on Suzuki’s extremely popular SV 650. The price is high: the new copy from Korea costs a good third less, young used cars are available for less than 3000 euros. However, the chassis and transmission cannot hold a candle to the original. There won’t be any ABS for the GT anytime soon either.

Large-scale production meets emotion: it has been robbing for more than ten years
little bandit very successful through the German motorcycle scene.
The view of the finely ribbed four-cylinder is just as pleasing as
the power range of 78 hp that is drawn from it.
The offer is insane. It ranges from frequently used everyday bikes
up to young used cars, none in top condition
Cost 4,000 euros.

Named after an English race track, Triumph wants to be part of it
the attractively designed Thruxton appeal to fans of classic cafe racers from the sixties. The basis of the parallel twin
essentially corresponds to the Bonneville, but sharper camshafts and a very sporty seat geometry bring significantly more dynamism into play. The new and used prices are at a high level.

Without a doubt – Harley engines have flair. For a long time, however, Milwaukee steel seemed unsuitable for dynamic country road enjoyment. Until designer Erik Buell took on the matter and created motorcycles like the X1 Lightning. The new price was
most recently at a proud 11,000 euros, as a used one it is available from 7,000 euros. Participation in one is included in the price
exclusive, sworn fan base.

Give your banker the cold shoulder and invest
into a Harley-Davidson. Even the small Sportster models
offer exceptional value retention – ten-year-old used vehicles cost an average of over 5,000 euros. Compared to
the other models from Milwaukee can score with the 883 with a remarkable agility. After all, it’s not a chopper, but a Sportster.

Pithy as the infamous »English breakfast« says
suddenly the T-Bird Sport in front of you. The performance is very restrained with just under 80 hp, the weight of almost five centners high. But the buxom Englishwoman can put herself in the limelight with a wonderfully classic look and a powerful triple sound. The prices of well-maintained enthusiast machines are as stable as
the bank of england.

Cardan, suitcase, no problems. Honda’s all-rounder is called Deauville and has a very wide range of uses. In terms of equipment, it can easily match upper-class tourers-
and easy to use on the street. ABS brakes and travel packages can be ordered for an additional charge. A motorcycle could hardly be more format-filling – you just have to
get along with the fully wired optics.

The professional world was initially speechless when they saw the TDM 850 in 1990: The mix of enduro look, touring engine and sports chassis was considered very daring. But the concept was well received and has influenced model policy to this day: Ducati Multistrada or Kawasaki Versys would be inconceivable without the TDM. The original fun bike is sold very briskly when used, the fresher look from 1996 is available from 2500 euros.