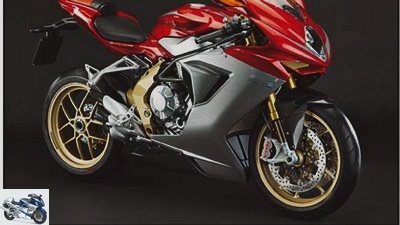 Italy’s glorious brand has recently started to rely on popular prices. The driving force behind the new direction is a three-cylinder engine with surprising technology such as a crankshaft rotating backwards.

MOTORRAD took a look inside.

Some dreams last almost a lifetime. Claudio Castiglioni was in his early twenties when racing legend Giacomo Agostini started his unique winning streak in MV Agusta three-cylinder engines in the mid-1960s. The eerily beautiful roar of these engines hit Castiglioni to the core, MV became for him the motorcycle brand par excellence. That continued long after she had disappeared from the market. In 1997 he brought it back to life with the F4. On top of that. “I also want to build a three-cylinder,” he said years ago in an interview with MOTORRAD, “it has something magical for MV. And the motorcycle around it must definitely be extraordinary. “

Around 45 years after Ago’s first victories, the modern three-cylinder is now going into production. It has actually become technically extraordinary, and the price is also extraordinary for MV conditions, namely relatively low: the F3 sports car is already available for 11990 euros, the Naked Bike Brutale 675, which will follow in the spring, costs 8990 euros in the basic version . Castiglioni himself does not live to see his dream come true, however, he died in August 2011. The business is now run by his son Giovanni (see interview on page 17), assisted by Massimo Bordi, long-time General Director of Ducati, and Technical Director Marco Cassinelli, who is responsible for Lamborghini came. Exclusively for MOTORRAD, they revealed many technical, some economic and also some human secrets of the project.

The way to the finished engine was not easy. Driven by well-preserved youthful enthusiasm for the historical model, Castiglioni initially only wanted to see the best and most elaborate technology implemented in the new three-cylinder: Radially arranged valves, a spur gear set to drive the camshafts, the alternator behind the cylinders, to a maximum width of 300 millimeters to come – these were his instructions. Because the Yamaha M1 under Valentino Rossi was the dominant motorcycle of the MotoGP class in the pre-development phase and its superior handling was due, among other things, to the backward rotating crankshaft, Castiglioni also demanded that the crankshaft of his three-cylinder should also rotate against the direction of travel.

The accompanying gyroscopic effect, according to the calculation, would counteract that which is generated by the forward-turning wheels, making the motorcycle more manageable and reducing the tendency to wheelie when accelerating sharply. Head of Technology Marco Cassinelli says that, according to the measured values, the effect is not very strong, but according to the test driver’s impressions it is very noticeable. It would be interesting to know which motorcycle served as a comparison object. For example an MV chassis with the engine of a Triumph Daytona 675? 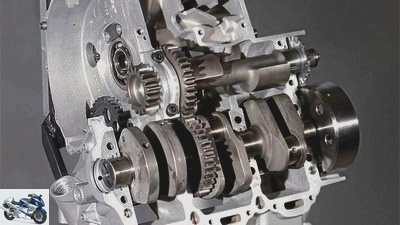 Approximately in the installation position: The housing is diagonally divided from the top rear to the bottom front. The crankshaft rotates backwards, which is why the balancer shaft is used in the first secondary job to reverse the direction of rotation. Further functions of this wave are shown on the following pages.

So that the motorcycle does not go backwards when the crankshaft rotates backwards, an additional shaft is required in the connection to the rear wheel, and the balancer shaft, which is necessary in a modern three-cylinder, is suitable for this task. With MV drilling it even becomes a true multifunctional part. Firstly, it sets the vibration-dampening counterweights into rotation, and secondly, it establishes the connection between the crankshaft and clutch and, at the same time, establishes the correct direction of rotation. Thirdly, it drives the sprocket of the timing chain and fourthly, it takes up the encoder for detecting the crankshaft position. Head of Technology Cassinelli even calls it the heart of the engine.

As for the other technical specialties originally required, the technicians literally wrested more sensible solutions from their “presidente”. Three engine variants and, according to legend, also a shirt collar fell victim to the struggle. The radially arranged valves, which require particularly complicated machining of the cylinder head, just lost the competition against parallel hanging valves. Because the technicians Claudio Castiglioni were able to prove at the same time that speeds of over 15,000 rpm can be easily achieved with modern timing chains, they were also able to do without the spur gear drive of the camshafts.

Engine variant three was a breathtaking 299 millimeters narrow, but the so-called backpack alternator behind the cylinder block was unfortunately less speed-resistant than the timing chain. After several test copies had burst, the representative of the supplier company desperately asked to use a generator that sits directly on the stub of the crankshaft. It is a bit wider, but it holds. With this solution, the MV-Drilling is still a full 80 millimeters narrower than the engine of the Triumph Daytona 675.

From a technical point of view, it is therefore not enough to disadvantage the F3 engine that it has become increasingly sensible from an economic point of view. It is the most important component of MV’s price offensive, as it saves around 40 percent in manufacturing costs compared to the four-cylinder. This is helped by the fact that all gears from the primary drive to the gear pair of the sixth gear are manufactured with the same tooth module and therefore with a standard tool that can be bought normally. The F3 is also 40 percent better than the F4 in terms of environmental compatibility, in terms of the manufacturing process and service life through to recycling.

In addition to efficient production, it is also important that the developers do not exhaust the engine concept right from the start. At 31.8 millimeters at the inlet and 26.7 millimeters at the outlet, the diameters of the titanium valves are 1.3 and 1.2 millimeters, respectively, larger than those of the Daytona, but they do not use the 79 millimeter bore as radically as one of the discarded engine variants. A photo of the associated cylinder head appeared almost a year ago in -MOTORRAD 5/2011. In the absence of up-to-date information, one had to assume that this stand would go into series production.

Much more material remains between the cylinder bores than was previously tested. The bars on the narrow third variant were less than five millimeters thick; there are seven in the series. This creates the possibility of expanding the displacement to over 800 cm³ later without having to increase the external dimensions of the engine. Perhaps this will be the engine variant for the supermotard MV announced by Giovanni Cas-tiglioni and due to appear in 2013. 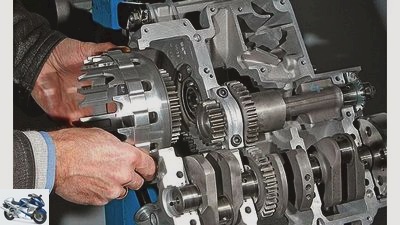 The gear wheels of the clutch basket and the balance shaft form the second stage of the primary drive. Another, narrow gear wheel engages in the clutch wheel – it drives the water and oil pumps.

Without receiving any more detailed information, the MOTORRAD delegation got their hands on several camshafts during their visit to the plant, which differed mainly in their cam lift. In the F3 engine with 126 hp, the intake valves, which weigh just 17 grams, are pushed open around 11.7 millimeters, two millimeters further than on the BMW S 1000 RR. The inlet cam of the Brutale 675 with 115 hp looked like a gentle hill in comparison, which certainly benefits the torque in the lower range. And then there was the inlet shaft called “RR”. Marco Cassinelli answered a curious question about it with a shrug and casually clearing away the telltale part at the first opportunity.

Because the three-cylinder was to be used as a platform engine in several motorcycles right from the start, including the sparingly disguised Brutale, the technicians relocated large sections of the cooling circuit into the housing. The photos on page 12 show the channels on the front of the housing through which the coolant is driven upwards by the water pump located inside the oil sump before it flows past the hot outlet zone into the cylinder head. The unattractive hose loop between the radiator and the engine is reduced to the bare minimum, and the attractive appearance of the engine comes into its own.

Direction of rotation of the crankshaft, cylinder block cast together with the housing, cassette gears, titanium valves – if hardcore MV fans feared that the new three-cylinder was only sensible, they can breathe a sigh of relief. There are still enough technical delicacies and special features left. And the motorcycle around it is also extraordinary. As planned.