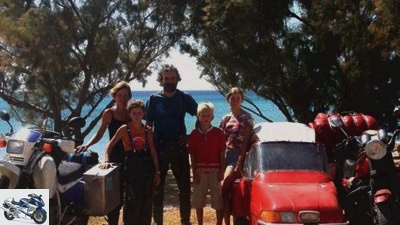 My most absurd tour: Turkey

My most absurd tour: Turkey
With a child and a kebab

Traffic jam in a crammed station wagon or vacation on the balcony? Neither: Two adults and three children dare a trip through Turkey on two and a half motorcycles and show a successful fusion of biking, vacation and family.

Yawning emptiness ?? no water in the pool at the campsite. Three thumbs point down, my co-pilots have no mercy. The guide had promised a swimming pool, so keep going. The wonderful tuff sandstone mountains through which I steer the Guzzi team make me forget the heat that turns the Goreme Valley into an oven. Petra on the enduro behind me is braising with equanimity in her leather dress. My partner Max, on the other hand, groans in his motorcycle outfit while the girls doze off in the sidecar in airy dresses.

The rescue is called Kaya-Camping: a super pool with crystal clear, refreshing water, impressive views over the volcanic rock landscape and extremely friendly owners. Putting up the tent is now up to the parents, the kids are splashing around.

Different rules apply when traveling with children. The ?? dear little ones ?? are enthusiastic about a motorcycle tour, but highlights such as the swimming pool or the sea are a must. Then you are also ready to scramble to explore ancient temples, theaters or other debris. However, strikes can never be ruled out. Like on the first big sidecar tour through Tunisia: The then two-year-old Lisa took her doll out of the sidecar at a stop in the middle of the desert and decided to stay there. Only good persuasion finally dissuaded her from her plan.

The current trip is already the second trip to Turkey. Packing for a company like this is always a little adventure. Sleeping bags, sleeping mats and clothes ?? everything in five versions. That needs its place. Likewise, tent, cooking box, food and drink on the go. Travel luxuries such as folding chairs and a table fit into the sidecar. But despite careful preparation, shoes, washbags and cuddly toys still appear in the end that no one had thought of. The self-made aluminum suitcases and huge Ortlieb sacks do a good job. The top priority on the journey: just driving all day is not possible. With children, fewer motorways and fewer kilometers are the order of the day. 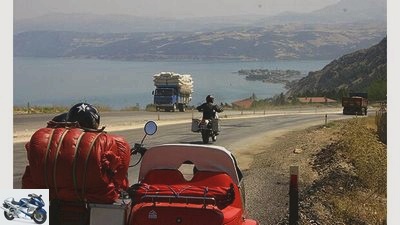 Heavy haulage among themselves: Guzzi team and truck.

Even the small Mediterranean cruise to Çeþme is relaxing: family skating on deck, reading and relaxing. We stay on the beach of Çeþme for two days, discover brightly colored fish with a snorkel and diving goggles, exchange the first Turkish lira for vegetables, pide and ayran. Mozart wakes us up at six in the morning by mobile phone, we want to go to the palm beach of Pamucak before the heat . Selçuk is not far away, and the girls are drawn to the market? Shopping is the order of the day. When buying fruit and vegetables, Lisa proudly conducts negotiations with her few bits of Turkish. And Charlotte is blown away: Nail polish only costs 25 cents! There are also stands everywhere with T-shirts from well-known brands and necklaces for your neck and wrist.

On the way to Denizli, a refueling break turns into an event: the owner of the gas station has tea and juice served and insists on souvenir photos with the children. Sometimes it annoys the little ones to attract attention always and everywhere. But they still think it’s cool to travel by bike.

Pamukkale is a must, even if it is at times like a folk festival. We treat ourselves to two rooms with a pool. Max immediately stands in front of the fan that blows the heat out of the room.

The next morning a visit to the white sinter terraces is on the agenda. We bravely climb the water-washed lime steps, even before the first buses arrive. At the top there is a thermal bath, Petra and I lie on Roman columns in the water and enjoy the day. The children, on the other hand, play hide-and-seek with the annoying photographers who keep the tourists ?? Hello ?? shouting to sell them their pictures.

In the evening the village calm returns to Pamukkale and we watch a woman prepare gozleme: a thin pancake that is baked on a curved tray and filled with sheep’s cheese and parsley. Her husband talks about his time in Germany. Hardly anyone here speaks badly of our homeland. 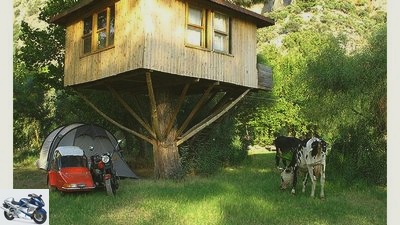 Short stop at Eðirdir Lake, which is picturesquely framed by mountains, and on to Konya, city of dervishes. But big cities are not our thing. Much more idyllic: the Ihlara Gorge. It was created by an underground watercourse that hollowed out the subsoil and eventually caused the ground to collapse. We hike through the canyon, which actually reminds of the big brother in the USA. Trees, bushes, meadows ?? everything in lush green. Later, painted churches carved into the rock appear and announce the highlight of our tour mentioned at the beginning: Cappadocia.

The Christians not only carved places of worship into the soft volcanic rock there, but also created underground cities like Derinkuyu while fleeing from the Romans and Arabs. We go on a discovery tour eight floors deep. Above all, Max and Charlotte are busy with their flashlights, always exploring new corridors and rooms. The valleys outside are peppered with the typical tufa needles that are reminiscent of man’s best piece.

Actually, we wanted to avoid the South Aegean, which is fully developed for tourism. But so many motorcycle travelers rave about the winding route and the wonderful view of the rocky coast. In fact, curve to curve follows westward, almost as if in engine rhythm, until it comes full circle on Pamucak beach.

Exciting break on the way there: in Taþucu Bay between the
Snorkel sea turtles that come there to eat. In Antalya, Charlotte rescues a small marine lizard that cannot find the water after hatching.

From Kaþ you can take a boat tour to the island of Kekova. Crystal clear water provides a clear view of the ruins of sunken cities, and the remains of broken clay jugs can be seen through the glass floor of the ship.

Last stop: Saklikent Gorge. The children are looking forward to the rental tree houses, but they are all taken. As a remedy for frustration, we hike on wooden walkways and through ice-cold floods along the more than 300-meter-high rock walls.

Back in Çeþme: again sea, eat pide one last time. We have to promise the children to come back. 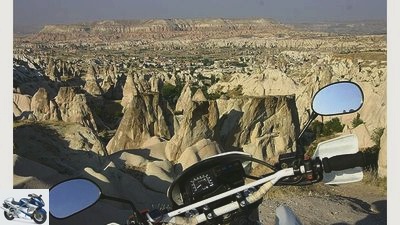 Highlight of the trip: Cappadocia with its tufa caves and underground cities.

ater Hans-Georg Henle steered the backbone of the family haulage company: a 1987 Guzzi 850-T5 with delicate Dynotec tuning, swing fork and EZS boat with smart wheels and Bilstein dampers. The children between the ages of nine and twelve found space in the sidecar and on the pillion of the Guzzi. Full-face helmets were a must in the boat, motorcycle clothing only on the pillion passenger. Three-point automatic seat belts secured the crew in the sidecar, while a rain and sun canopy protected them from the elements. Mother Petra drove a 1995 US version of the Honda XR 650 L. Both machines carried specially made aluminum cases and luggage racks. The Ortlieb sacks served as a backrest for the pillion passenger. A tunnel tent combined low weight and pack size with plenty of living space. It was cooked with gasoline from the motorcycle tank. The motorcycles must be registered to their drivers and require a green insurance card.