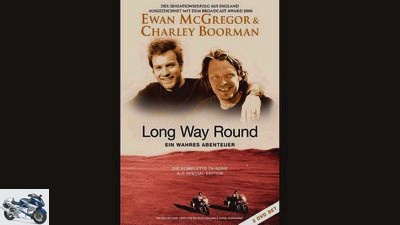 Hollywood star Ewan McGregor and fellow actor Charley Boorman called their film about a four-month trip around the world “Long way round”. Now the book about the trip has been published in German.

Once around the world – the actors and friends Ewan McGregor (Star Wars, Moulin Rouge, Trainspotting) and Charley Boorman (The Bunker, The Emerald Forest) are not the first to circle the globe on motorcycles.

But the way in which the two camera-tested celebrities had their trip “long way round” gilded is likely to be unique in the two-wheeled travel scene. The list of sponsors is as long as the route itself, and a camera team (another motorcyclist and two escort vehicles) provided the material for a superbly made TV series, which has also been sold 420,000 copies on DVD to date. The English book edition went over the counter around a million times. To ask?

A good two years after the trip, the book has now been published in German. Inevitably, when reading (as when looking at the film) one asks oneself the question: is this still a real journey? Or is it ultimately a gigantic PR act? Both are true, at least somehow. In fact, it is difficult to put the book down when Ewan or Charley take turns reporting on the “long way round” that has taken them from London through Eastern Europe, Asia and through North America to New York. Why? Because the two extremely sympathetic protagonists convey the fun and frustration of such an adventure mercilessly well and extremely credibly.

Ewan and Charley are everything – just not seasoned travelers. One suffers with them when, despite months of intensive preparation, they have to wait for hours at various Eastern European borders because they only have useless copies instead of the real vehicle documents with them. Or be surprised for pages by the poor road conditions in countries like Kazakhstan or Mongolia. Such basics are in every travel guide, if you want to call them out. Often only their relationships help. Or your interpreter and organizer, who will travel with you in the car at a suitable distance, will be summoned by satellite phone. At least as often, the two of them are annoyed by their mega-film-book project because the effort and obligations required are in stark contrast to their idea of ​​great freedom. In the meantime, the whole company is almost in danger of failing due to the celebrity factor. Charley: “Sometimes we were passed around like media stars, the hustle and bustle around us was just too intense, especially in Kazakhstan.” Charley and Ewan are biting through, and probably it’s the British humor that makes this work worth reading. A remarkable side effect: The respect for every traveler who throws himself into such an adventure without comparable support and budget increases immeasurably.

From Beijing to Berlin in five weeks

From Beijing to Berlin in five weeks
The six men on their rickety Yangtze motorbikes don’t have more time to spend around them
to unwind a distance of around 11,000 kilometers. The trip on the China bikes? a replica of the legendary sidecar BMW R 71 from the thirties ?? is developing in the west
from China, in Siberia and later in the vastness of Russia to a tough challenge for man and machine. Landscapes, encounters and curiosities, but also the madness to be able to travel this long way with such reasonably cobbled together vehicles
to make are perfectly documented and captivatingly portrayed. Both journalist Matthias Schepp and photographer Gerd George understand their craft: Schepp was almost 15 years old
Moscow and Beijing correspondent for Stern, George has worked for GEO, among others. You devour this book in one go? and this standard will be followed by future ones
Travel book authors of the motorcycle scene have to measure. msc
From Beijing to Berlin, Gerd George and Matthias Schepp, Bruckmann, 244 pages,
ISBN 3-7654-4434-0, 39.95 euros.

East on a Harley

East on a Harley
Dieter Kreutzkamp and his wife Juliana explore the new, Eastern Europe on a Harley Fat Boy, of all places. This weird combination comes about because the two experienced globetrotters first saw Easy Rider one Saturday evening in May 2005 and then the Eurovision Song Contest, in which the Germans competed as usual
embarrassing to the bone. Whereas the new member states
perform exceptionally well in the EU. This in turn arouses author Kreutzkamp’s curiosity: “I am familiar with most corners of the world,” he writes, “but have never been to Poland or the Baltic States. Sidney or
I don’t know New Delhi like the back of my hand
but Krakow «And because that is similar to most motorcycle travelers, one reads eagerly the experiences of the Fat Boy crew,
avowed campers, by the way, between the local Hanover and Saint Petersburg
have made. And in the end I want two things above all: more photos and, above all, more than the 235 pages offered, especially since Kreutzkamp has knitted a lot of history lessons into the travel report. hjg
Go East ?? With the Harley through the new Europe, Dieter Kreutzkamp, ​​Frederking & Thaler Verlag, 235 pages, ISBN 3-89405-661-4, 19.90 euros.

Winter is mechanic time
This is what real Christmas presents look like! Who ever wanted to know everything about their Enduro and never dared to ask? here are the answers. Bucheli-Verlag has started a new concept for repair instructions a few years ago
a promising path. Because in these special technical volumes, the approach is not model-specific, but genre-specific. And thereby the
General scope of information expanded significantly without being equal-
to neglect details at an early stage. After two-stroke and moped enthusiasts, it is now the turn of the tunnel fraction. The knowledge conveyed on 192 large-format pages with many photos and drawings fulfills the needs of both beginners and advanced hobbyists. Well written, clearly explained and with some details referring to the respective model manual. Which is seldom necessary. Big compliments to the author for balancing the gap between comprehensive information-
mation and detailed work instructions succeed perfectly. Ajo
Repair manual for Enduros, Crossers and
Supermotos, Franz-Josef Schermer, Bucheli Verlag,
ISBN 3-7168-2066-0, 29.90 euros.

The long way to the cape

The long way to the cape
Life is short and time to read is short. Good for those who do not spend it with Joachim von Loeben’s »respite«. A 184-page travelogue that, with a clear conscience, cannot be recommended to anyone interested in literature. The topic sounds quite exciting: A lawyer retires from his job for a year in order to travel all over Africa. Start in Cologne, finish in Cape Town. He only buys the machine shortly before the trip, he doesn’t have much more motorcycle experience than his driver’s license, he learns to drive in difficult terrain on the go. Stuff for dreams and novels. In fact. But not for von Loeben, who drags himself from country to country, from chapter to chapter, with the power of speech of a school essay. You learn about Africa except for his-
Toric demolitions little, the chaos of the traveler who, for example, remains lying around countless times because of incorrect fuel calculations, all the more. It’s a shame that the dream didn’t turn out to be more. Ajo
Take a break, Joachim von Loeben,
Highlights-Verlag, 184 pages,
ISBN 3-933385-36-9, 9.90 euros.

Local history for bikers
Three years ago, the aim of the work at Klartext Verlag in Essen was motorcycle travel guides for the home. Statistically, 90 percent of all motorcycle rides take place within a 100-kilometer radius of one’s place of residence. Meanwhile, with the three volumes Ruhrgebiet, Rhineland and Stuttgart
the first premium in terms of local customers in retail. And in the middle
in a highly competitive segment served by several publishers.
But the little books from the pot do their job just fine. Thanks to the sturdy thread stitching, you can get it straight out of your jacket pocket
unfolded in the map compartment of the tank bag
be plugged in and guide you through the area. Without copies or extra cards. By card or road book, both are available. Nine to ten clever, well-scouted rounds that also show the locals something new and offer tips on interesting sights. There is also a check of all essential bikers’ get-togethers. So if you get bored at home, you can find tips here. Ajo
Motorbike experience, Klartext Verlag, Ruhr-
area (ISBN 3-89861-574-X), Stuttgart
(ISBN 3-89861-573-0), Rhineland
(ISBN 3-89861-350-X), each 12.90 euros.