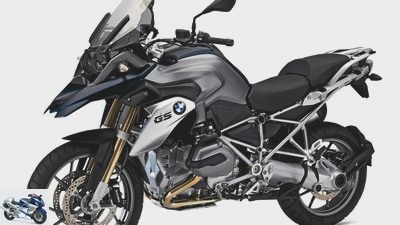 The standard GS will get the Adventure engine in autumn, plus some new options as special equipment. The 1300 series gets a new S-model, the six-cylinder get a facelift.

It has only been two issues that MOTORRAD asked in issue 14/2014 whether the Adventure version was not the better GS compared to the standard R 1200 GS. A clear indication of this: “… between 2000 and 3500 rpm the engine runs noticeably more evenly, starts more smoothly, without appearing sluggish.”

The reason for the more homogeneous power delivery is exactly 950 grams more flywheel mass that the crankshaft of the Adventure version carries on its cheeks. From now on, BMW also installs this heavier crankshaft in the water-cooled boxer of the standard GS. With this she should catch up with her adventure sister in terms of running culture.

New colors and special accessories for the GS

Apart from the new colors (including “Frozen Dark Blue metallic”), the other model maintenance measures for the GS only affect the special accessories. The bestseller will be available from August with the new “Keyless Ride” system from BMW and a gearshift assistant. The surcharges for these accessory options have not yet been determined. The “Keyless Ride” system registers the transponder in the ignition key as soon as it is closer than two meters to the motorcycle. Then the driver can unlock the steering lock at the push of a button, switch on the ignition and start. The tank cap and alarm system (if present) are also networked with the system and are automatically activated or deactivated by the transponder.

The Shift Assistant Pro, which premiered in RT, allows gearshifts without the clutch for both upshifts and downshifts. The clutch lever is only needed when starting or maneuvering. Both features will also be available for the Adventure. Since the impressive seat height of the long-haul big ship has apparently deterred many drivers so far, BMW now offers the Adventure not only lowering (minus 50 to 860/840 mm seat height) the option of installing the bench of the standard GS (another 20 mm less ) – as usual for a surcharge. As of autumn, the two six-cylinder K 1600 GT and GTL will have traction control (Dynamic Traction Control, DTC) and a more clearly designed cockpit with new scales as standard.