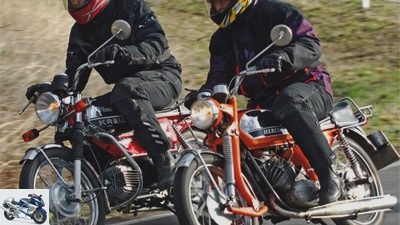 In their 50s, the guys in the 60s and 70s struggled for every km / h and every quarter horsepower to be way ahead. But how much power their 50s really had was controversial despite the manufacturer’s information.

What Play Stations and computers are to kids today were their mopeds to teenagers in the 60s and 70s. Driving at all costs was the order of the day, mostly against the resistance of the parents. Numerous well-known manufacturers were in tough competition with each other and pushed each other up with ever new models. In this race they cheerfully climbed the horsepower ladder, because although the legislature had restricted the cubic capacity to 50 cm³, unlike today, neither the power nor the maximum speed were regulated. The PS grew continuously from 4.5 to 5.2 to over 6.

Even at the Ifma, the companies waited until the last moment with their posters in order not to be taken by surprise by the competition with a higher performance rating. The performance rose and rose until the manufacturers got cold feet and feared legislative restrictions. In 1969 the industry sat down at the round table and decided to forestall the legislature. For the 1970 season, the committee agreed a voluntary self-limitation to 6.25 hp. With immediate effect, advertising stopped giving information about performance and top speed.

Whether wise foresight or hasty obedience was the motivation can no longer be understood today, but the youth were deeply shaken, especially as the look across the borders showed more courage to take the gap. In Bella Italia, the manufacturers were much more relaxed, and Guazzoni, for example, attested his Matta a solid 8 hp. But it was precisely the self-imposed restriction that created fuel for wild speculation in the years that followed. The young people suspected that the industry was developing the engines further and breathing more power into them than the advertised 6.3 hp.

Whether the wish was the father of the thought, a certain optimism of purpose fueled this hope, the guys in their 50s just felt damn fast or the psychological effect of being faster from countless duels was a monstrous one, could not be verified: Even the press, well MOTORRAD, never did educational work in the form of a test bench measurement – probably for political reasons.

In 1981, the legislature allowed an increase in displacement to 80 cm³ and thus ended the discussion that the voluntary self-restriction to 6.3 hp no longer applies. Shortly before this, individual manufacturers had pushed ahead and corrected the output up to 6.8 hp. But the guesswork around the question of how much remained alive – to this day.

MOTORRAD CLASSIC put the test to the test and put two species of the genre to the test, not to reinvent the writing of history, but to finally shed light on the darkness of the youthful performance society of the time “Fast 50s” to the test: A Hercules K 50 SE from 1974 and a Kreidler RS from 1977, both in absolutely original condition, should prove their potency measurably. The Kreidler’s engine is built from new original parts and has just been run in, while the Hercules can be seen as well hung and particularly well run in: the unrestored original has 30,000 kilometers under its belt. 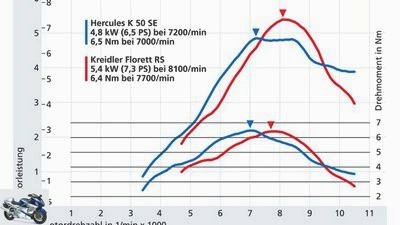 So on the role with the candidates: The series of measurements produced a cleanly reproducible result, which, however, caused a few surprises: In fact, the curves show not only a tendency, but a clear result. The performance of both machines is clearly above the limit of 6.3 hp, and even at a nominal speed well below the manufacturer’s specification. Kreidler owner Ralf Schneider can look forward to a hefty 7.3 hp at 8100 rpm, while Werner Link, the owner of the Hercules, looks rather disappointed in view of the 6.5 hp at 7200 rpm – even with a sideways glance at the Kreidler.

Amazingly, the curves run very differently: The Kreidler has clearly sportier, albeit more pointed, characteristics. The curve climbs steeply up to over 8000 rpm, and then tilts back just as steeply. the Hercules is even higher in the speed range up to 7000 rpm and then remains on a plateau up to 8500 rpm, so it has more of a tourist character. 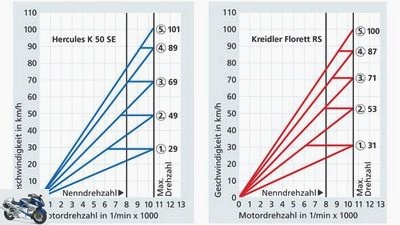 Structural features such as the long-stroke design and the smaller carburetor of the Hercules’ Sachs engine also point in this direction. Of course, other technical features such as timing and exhaust systems play a decisive role. But in the end result, the two are closer together than the pure power measurement suggests: The Kreidler has to struggle with a higher power loss than the Hercules. While with the Hercules 0.8 HP get stuck in the power transmission at the maximum output, it is still 1.3 with the Kreidler. Ergo, both 50s would have to be about the same level when driving, especially since the overall gear ratio and the individual gear steps are almost identical.

As in May, it was important to compare the two in a face-to-face duel on the road, even if the drivers, in contrast to the mopeds, have increased in weight and frontal area over the years. At the first set of traffic lights, the Hercules driver takes the Kreidler driver off a few meters in the first two aisles, much to his astonishment. Then the Kreidler moves up and takes over the leadership. Surprisingly, the Hercules’ draw-wedge-shifted gearbox does not work any worse than the Kreidler’s claw-shifted counterpart. The desire for reversed gearshifts, yes, for an automatic gearshift machine, arises, because with it one or two meters can be done well in the sprint.

Such superfluous thoughts arise because the hot 50s left no one indifferent back then, today they even cast a spell on the elderly and move them back decades. The hairdressing arts with highly variable successes suddenly reappear in the back of the mind. Paradoxically, it turns out that the Kreidler loses ground with the larger spread in the lower gears if the driver squeezes it up to the speed limit, because the output falls below 9500 rpm.

The Hercules still has a lot to offer in this area – so come on with a programmable shift light. At higher speeds, the Kreidler can easily pull away, while at the top the duel ends in a draw despite the Kreidler’s performance plus. The power and gear diagram confirm the subjective impression: the Hercules uses its potential optimally, the Kreidler could use a longer gear ratio, its maximum output is already below 80 km / h. This tuning step was even officially possible at the time, as the Kornwestheimer sprockets offered with 33, 34 and 35 teeth.

Again we caught ourselves mentally tuning, and Ralf Schneider not only got various sprockets, but is also seriously considering why his Kreidler has more power loss than the Hercules. Young people once did research, and at a set age, a brisk 50s help to stay youthful. There is the realization that the companies actually developed the engines even after the voluntary self-restraint in order not to lose touch with the competition and went to the upper tolerance limit – sometimes even above.

For the sake of simplicity 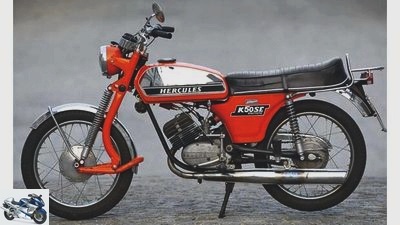 Weight: with a full tank 85 kg 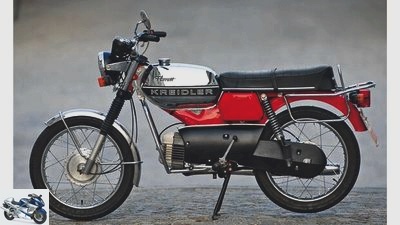 Weight: with a full tank 83 kg 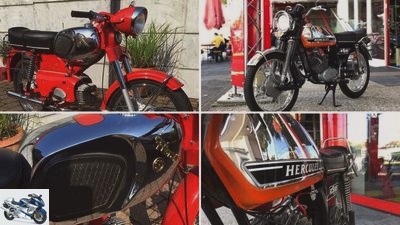 Kleidler and Hercules in good condition are now rarities.

Vehicles from Kreidler or Hercules are now considered rarities and only rarely appear in classifieds. Thus, they have a certain collector’s value and are very valuable to enthusiasts. A current overview of used Hercules and Kreidler motorcycles and mopeds can be found here: used Kreidler and Herkules motorcycles.