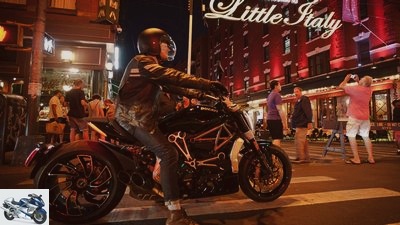 On the road: New York at night

On the road: New York at night
Night ride

Fancy a tour of New York City? We also. And because the Big Apple never sleeps, we choose the night. The streets should be free there. Or something like that …

And seems to be halfway awake for the first time. With red-set eyes, he squints tiredly in the direction of the inside mirror. He’s probably been behind the wheel for over twelve hours, cranking his way through the city – the one that never sleeps. “The streets of New York City are damn sticky and always congested,” he murmurs, adding, “Only on a motorcycle do you have the chance to get anywhere.” That’s exactly what we want to find out. And say goodbye to Mr. Cabdriver on Avenue of the Americas, right in front of the glass doors of Manhattan’s largest Ducati dealer. A temple of happiness, that much can be gleaned from the first long look through the large panes. In addition to converted monsters and scramblers, there are also some time-consuming custom bikes.

On the road: New York at night
Night ride

Now the night is approaching – and a devilish date with her: The ride on an XDiavel through Manhattan. Why at night? During the day there is war on the streets of the metropolis. Crowds of yellow and green taxis fight against scarred delivery vans that have nothing more to lose. Polished SUVs try to cook the finest sports cars. Between? Dozens of private limousines that offer their driving services via the “Uber” platform – and in the end expose their guests to the tough stop and go like everyone else. Plan B? Take the subway or come back when the sun sets and most of the visitors leave the field exhausted. Only then are the streets enjoyable, at least says Steve, who owns the Ducati store (see interview on page 28). On the phone he promises us to put a black machine in front of the door. “A bigger toy!”

Which brings us to answer number two: In America, as is well known, everything can be a little bigger. Just fatter. The XDiavel S fits perfectly into the picture; a flat, elongated beating with a strong V2 and wide flap. Nice black, nice bad. In terms of appearance, it is somewhere between a show bike and a slimmed-down Harley, but even here, in the center of the overstimulation, it attracts likes like bikini beauties on Instagram. And holds back the best trump card for all those who not only stare at them, but also execute them. The machine not only weighs less than most American bikes, it also rides the way it looks.

A big advantage if the tarry has a lot of cracks – and New York has that. All over. Some are so wide and so deep that even a XDiavel S bike can buck and go off course. Fucking rag rug. In addition, there are motorists who think the blind spot is a new Star Wars episode and who ruthlessly change lanes. Without a keen sense you won’t get very far here.

Why is it still worth strolling through Manhattan on two wheels at night? Can you still remember the movie “I am Legend”? In which Will Smith enviable heats through deserted New York? It feels similar when you roll over one of the large bridges towards Manhattan at night. The darkness covers the wounds and the hustle and bustle of the city like a filter. What remains is a kind of large course made of illuminated, steel giants. Once immersed, the many gorges can be explored at will. And since the road network follows a simple matrix with simple numbering, orientation is very easy. Only the opaque traffic light phases try to disturb the harmony. But they don’t make it. Because the short stops are perfect pauses for breathing to enjoy the view, to start intermediate sprints and to aim for a new direction. Traffic? It gets milder with every minute. Even in Times Square you can relax after ten on the roadside for a cigarette’s length.

Which the XDiavel S acknowledges shortly afterwards with a heartbeat and puts all of its 156 hp on the wide toothed belt. Your 1200 may be called Testastretta, but it feels more like a large pinch of testosterone. The barista in Little Italy also finds it while he is handing a double espresso over the counter that will tighten his eyelids for the rest of the night. “Is it a good ride?” He asks with a clear accent. It’s clear! It’s the best you can get in New York City. At night on the bike through Manhattan, that has its own charm. It’s not about cornering quality or the quick kick from A to B. Here you surf all by yourself through a metropolis of millions, a sea of ​​steel, glass and light. And lets you waft a soothing pinch of loneliness around your nose that normally doesn’t exist here. A monumental experience full of freedom that can be addicting.

Steve Radt (46), head of the largest Ducati store in Manhattan, has been on two wheels since he was nine and knows New York like the back of his hand.

Fuel: How would you describe motorcycling in NYC?

Steve: (laughs) On the one hand, it gives you the freedom to slip through the heavy traffic. You know, rush hour in New York City starts around 6 a.m. and tends to last until 10 p.m. As a motorcyclist, you are faster than anyone else. But you have to have your senses together, otherwise it’ll pop very quickly. There is a harsh climate on the streets.

Fuel: Is it more dangerous than in other cities?

Steve: Not necessarily. I’ve traveled a lot and ridden motorcycles in other big cities as well. In Rome, for example, things are more serious than here.

Fuel: Which bike would you recommend for Manhattan??

Steve: As a Duc dealer, I clearly advise against the Scrambler or Monster in traffic during the day. So you are agile, slim and fast on the go.

Steve: Yes, unfortunately: It has become difficult to rent bikes in Manhattan. Insurance is just way too expensive. If you don’t know anyone who lends you a machine privately, it will be difficult.