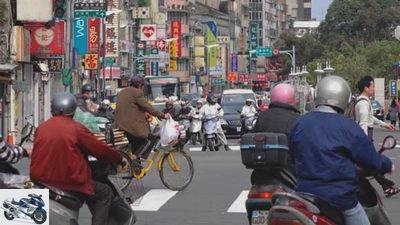 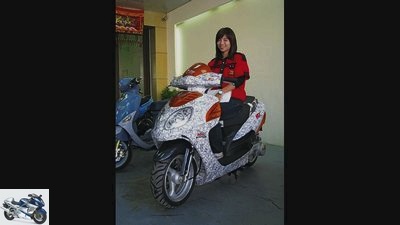 1/15
Sales strength: Tuning kits for scooters are very popular at NCY in Tainan. 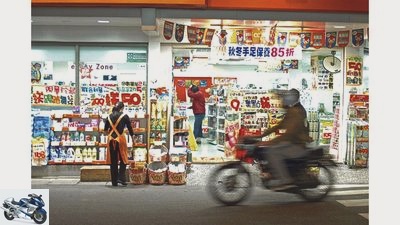 2/15
In addition to tradition, Taiwan’s big cities have nightlife like our countries. Colorful advertisements on shops that are open late into the night. 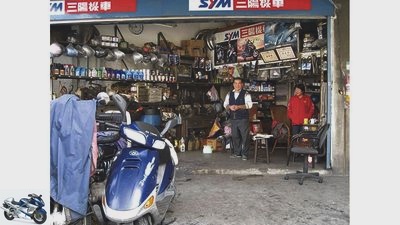 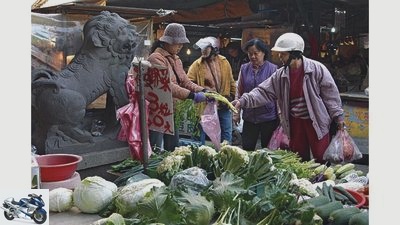 4/15
Market day in Tainan: The majority of women come by scooter. 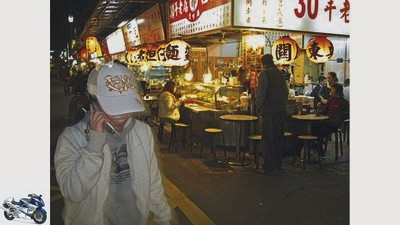 5/15
Even “Fast food” are available at the numerous cookshops. 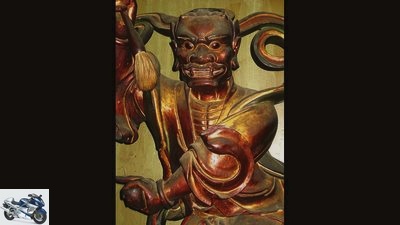 6/15
Ornate figures in the temples bring old times back to life. 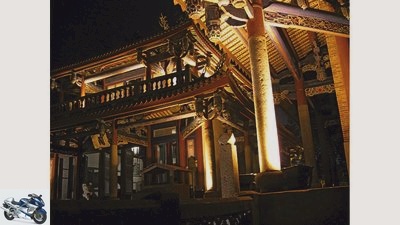 7/15
At the same time you can find amazing things in big cities: temples from the Ming Dynasty in Tainan. 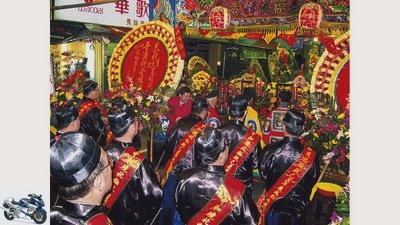 8/15
In Taiwan, traditions stand alongside modernity: the Kirchweih festival, a colorful birthday of a temple in Tainan. 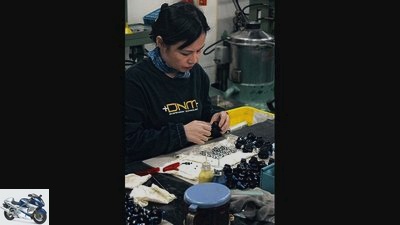 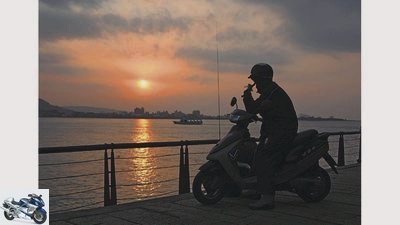 10/15
Outside the hectic cities there are also quiet places. At the gates of Taipei: evening mood on the Danshui River. 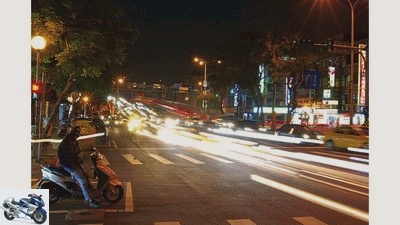 11/15
A Friday night in Taipei: In the metropolis with a population of over a million, things are buzzing around the clock. 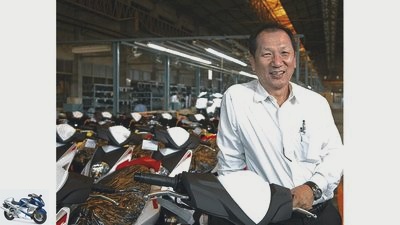 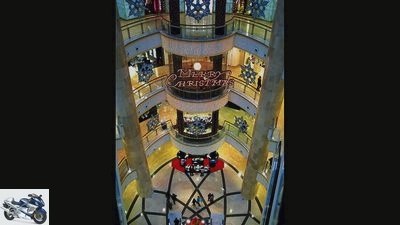 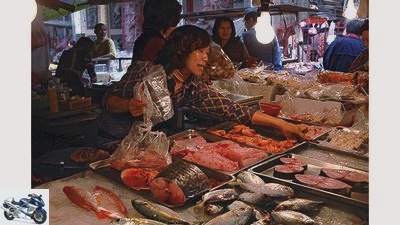 14/15
In addition to vegetables, the market also has a huge selection of fish and seafood. 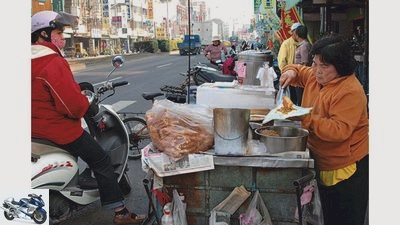 15/15
There is also a drive-in food stall for scooters on the roadside: stop, pack up, drive on.

On the way: A trip through Taiwan

On the go: Taiwan
A trip through Taiwan

The island off the coast of China once served as a general’s refuge from Mao’s troops and is now one of the most economically successful tiger states in Asia. A trip through little China in the western Pacific.

The heavy Mercedes sedan swerves, pulls sharply to the right and crosses three lanes at once. Chauffeur Jeff lets a control look through all the mirrors in the vehicle before he gives full throttle and turns the steering wheel with a mighty swing to the left. An old Toyota Corolla in the middle lane is overtaken on the right, the small gap directly behind it is enough for the long-wheelbase version of the luxury car from Stuttgart to attack the Lexus diagonally in front of it on the far left.

What looks from the font like a version of a computer game that has become reality is everyday life in Taipei’s dense city traffic. Jeff works for a limousine service and loves to show the newcomer to Taiwan on the way from the airport to the city center what defines the island in the China Sea: pace, pace!

On the go: Taiwan
A trip through Taiwan

The black Mercedes with its all-round darkened privacy glass can only display its overtaking prestige on a halfway clear route. The closer the center of the 2.6 million metropolis of Taipei moves, the more abrupt changes between the brakes and kickdowns can be felt, with which Jeff now exploits the smaller gaps in traffic profitably. But he has to back down on the city ring. Because suddenly other companions take over power. At first it’s just a shadow that shoots past the side windows. Then the shadow play gains in frequency. And suddenly swarms of scooters in all variations, shapes and colors are darting back and forth through the traffic.

Not that the cars suddenly stop. Despite the increased density, they still move at a remarkable city pace, but have to admit defeat to two-wheelers in terms of agility. This is why single-track vehicles are among the most popular vehicles in Taiwan’s urban centers. Good to see when stopping at traffic lights: As a rule, an impressive armada of scooters gathers in front of the cars, and when it is green they slip away with a deafening hum and crackle. Without – as we know it from Germany – frustrated motorists accompany the space advantage of the two-wheeler pilots with a mixture of horns, finger gestures or hints of body checks. 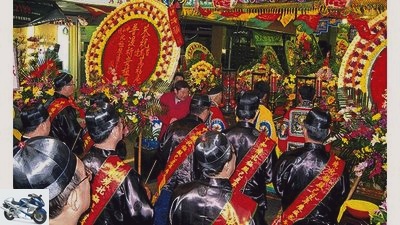 In Taiwan, traditions stand alongside modernity: the Kirchweih festival, a colorful birthday of a temple in Tainan.

Sounds like a dream land for bikers. But Jason, editor at Taiwan’s leading motorcycle magazine “Top rider”, quickly puts this impression into perspective. Real motorcyclists, he explains, are an absolute minority in Taiwan. Maximum of 20,000 “real” He estimates that there are bikes. And indeed: the longer you look at the traffic, the more you notice that motorcycles of 250 cubic or more are almost completely absent. You really have to look for them: like, for example, a 1098 and R1, which are cruising in pairs across the party mile in Taipei’s Shilin district. Or a lonely R 1150 RT, whose driver and passenger escape the big city juggernaut and disappear into a glorious sunset at the mouth of the Danshui River.

The two-wheeler, Jason lectures, is a purely utility vehicle for the Taiwanese. And because the country’s highways are taboo even for large single-track vehicles, it takes absolute passion to get a bike for more than just rush hour.

As an alternative, he recommends speed addicts a ride in the fastest elevator in the world: the elevator catapults visitors to the 508 meter high Taipei Tower at over 1000 meters per minute “101” within 37 seconds to the viewing platform at a height of almost 400 meters. Or a tour in the high-speed train, which takes just 90 minutes to cover the 350-kilometer Taipei-Kaohsiung route in the south of the country.

With a wise smile, the old General Chiang Kai-Shek watches over the fast-paced activities of his former subjects. The President of the Republic of Taiwan, who died in 1975, cannot do much, however. Most of the young visitors to the Chiang Kai-Shek Memorial Hall only pause briefly in front of the meter-high, mighty bronze statue of the bitter opponent of Mao before they are swallowed up again by the hustle and bustle of Taipei with its luxury department stores and trendy bars. On the way back to the airport this time Jeff’s colleague Fred pushes the pedal hard. Left, right, kickdown. Taiwan continues to accelerate.

About Taiwan (Republic of China) 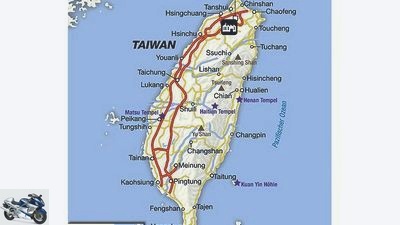 Between bikers and Buddha: The two-wheeler industry in Taiwan

The country has a homemade problem: For decades, the goods of the pro-western oriented state were proudly labeled with the label “Made in Republic of China”, short R.O.C., provided. Defiantly one wanted to announce that the economic heart of China is not on the communist mainland, the People’s Republic of China (English abbreviation “PRC”), but in the pro-western “National China” on the island of Taiwan. Meanwhile, Taiwan had to realize that the rest of the world hardly differentiates between R.O.C and PRC and “Made in china” struggles with a stigma in many (European) consumer eyes.

In many companies, western visitors are therefore presented with the quality standard that they adhere to in production as soon as they are welcomed. Many companies that manufacture scooters, motorcycles or supplier parts for the two-wheeled industry in Taiwan can now look back on a long tradition and large quantities. Such as Sanyang Industry, whose location in Hsinchu produces scooters and motorcycles of the SYM brand. In 1954 the company started with bicycle lamps, in 2010 a 600-cm³ large-capacity scooter should complete the product range. A cooperation with Hyundai has even made it into the top three vehicle manufacturers in Taiwan. Over a million scooters and ATVs are produced every year. Similar gigantic numbers are on the table at NHC, one of the world’s largest producers of brake and clutch linings. The range extends from bicycles to Shinkansen high-speed trains, and NHC pads are original equipment for many motorcycle manufacturers.

2.7 million rubbers leave the factory, which is run strictly according to Buddhist tradition – every month. Italian flair, on the other hand, prevails at Taiwan Golden Bee (TGB). The reason: the long collaboration with Vespa, which began in 1978 and led TGB boss George Lin to put passion first in the company’s guiding principle. They are particularly proud of the automatic transmission, which is used in Peugeot and Aprilia, among others.