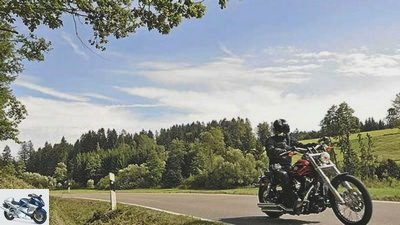 On the way: Idyllic street

An idea for the first trips in spring: the Idyllic Road, a 130-kilometer circuit in the Swabian-Franconian Forest Nature Park. Short enough to retract after a long break, long enough for the question of what actually “idyllic” means for people. We have a few answers ready.

Contemplative, rural, peaceful, simple – this is how the Duden describes the term idyllic. And isn’t that exactly what we look for in the little escapes from everyday life? Get out of the city and into the country. Harmony instead of hectic. Away with traffic jams and stress, here with leisure. This is exactly why we try the Idyllic Street. Which other road should promise the fulfillment of all these wishes and longings??

Even the start is pure enjoyment. The spoon slowly paves its way through the creamy landscape of a delicious kiwi cup, next to it, like freshly fallen snow, the fragrant cap of a cappuccino. We are sitting in the center of Welzheim under the parasols of the “Garda” ice cream parlor. The spirited owner Elide Badin (41) answers the admittedly somewhat ambush-like question of what idyll means for her, spontaneously with: “Feeling, amore, forest, romance, harmony, happiness.” -Bauknecht-Platz, where a Cagiva elephant trumpets past at regular intervals, for example, and hardly ever gets bored, my companion Benni is right: “It’s called an idyllic street, not an idyllic village!” So, “Ciao Welzheim!”, By the way, an old Limes town with a perfectly restored Roman fort, and off to the Ebnisee.

The reservoir, which can be reached on a few sweeping arches through the forest, was once created for rafting and is a popular meeting place for motorcyclists. More interesting than the armada of pedal boats are therefore the devices that can be moved by means of swift reciprocating pistons. For example the raspy green GSX-R 1100 with Kruger-Junginger single-sided swing arm from Martin Hutter. The 26-year-old metalworker, who made all of the GRP and carbon parts at Suzi himself, laughs: “It’s idyllic when I can sit on the motorcycle in the evening after the business and drive comfortably to the Ebnisee with my girlfriend relax. ”The attitude of Joe Ortelt (48) is similarly relaxed. The warehouse clerk – he is also called “the Indian” – looks as if he is playing in a western, and prefers to let the little horses of his prettied 883 Hugger trot leisurely. “I also want to perceive something from my environment. Nature is idyllic as God created it; or how the universe has made them available to us to be able to enjoy being here.”

Thanks to an overnight tip from junior boss Silvia, who runs the Worner kiosk on Ebnisee together with her mother, the evening comes to a pleasant end with a tasty roast roast deer and some cold bowls of hops. In the corridor of the inn a yellowed sign: “And if everyday life is depressed with grief and plague, think about the beautiful vacation days.” A tough contrast program then on breakfast television: In Stuttgart, only 40 kilometers away, thousands are still demonstrating against the “lowering” of the train station. Even more “Unidylle” took place nearby: the rampage in Winnenden, a sad example of the fact that a non-violent world is probably utopia. But now that’s the end of “the dark side of life”, back to the idyllic street.

A detour leads on a narrow track via Spatzenhof and Rotenmad to Nonnenmuhle. Most of all, you want to cuddle it, the landscape, which is very doll-like here. But do you do that as the handlebars of a Wide Glide, with a “born to be wild” on your lips? On the orchards, the branches will soon bend like gymnastic father Jahn with the bend of the trunk, the fields will soon bear. Farmer Heinrich has potatoes, and if you need petrol, you can stand at the gas station instead of a Golf next to a Guldner who plowed the field bravely 50 years ago.

Almost a culture shock then Murrhardt. A juggernaut! The town has 15,000 inhabitants – quickly on to Sulzbach. The road is now much wider, the speedometer needle bold at 120. And the idyll? Turn right behind Spiegelberg and dash for four winding kilometers through the forest uphill to Vorderbuchelberg.

A harleyluja for more ground clearance. It is still too early to stop at the Gasthof Ritter, so start off to Wustenrot. Create, create, build houses (and look at de Madle). Or would you prefer: displacement instead of living space? We meet Frank Trubendorfer in front of the church in Wustenrot. The smart 26-year-old, specialist in insurance and building society savings contracts, is a trained speaker and gives an impromptu lecture: “For me, idyllic means: no tourism, no heavy traffic, a landscape with sensations and attractions, small villages and cafes far from the city.” 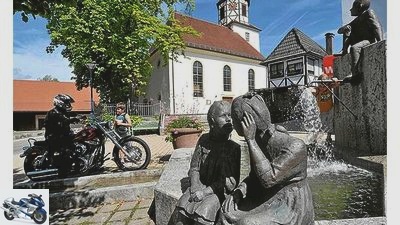 Even if a location away from industrial conurbations seems increasingly attractive today: Often it was – and is – not necessarily a guarantee of prosperity. This is how the area around Murrhardt was called Klammerlesgau because the people earned their meager livelihood by making and selling clothespins. Bernd Sturm did a much better job in Groberlach-Bohringsweiler. They look like the severed heads of aliens, the colorful motorcycle tanks that the 56-year-old airbrush artist speared on his hunter’s fence as a calling card. We talk quickly and hear what Bernd means by idyll: “Glide along calmly and relax without constantly looking in the rear-view mirror: Who is pushing again, do I have to drive faster?” What else you might need to know about Bohringsweiler : Three houses, six residents, eleven dogs, three horses and two pot-bellied pigs counts the nest, in which decrepit creatures are, by the way, cared for in a kind of animal hospice.

The water wheel in Oberrot-Hammerschmiede belongs to the old iron or wood. Rust and rotten boards – a saw no longer drives the wheel. Hopefully Anni and Richard Supple’s restaurant next door, where it is great to take a break, is granted a few more years. The landlady’s stories can be heard as well as the rising and falling sound of local heroes tiling past, whose pressure waves may cause the fragile ensemble to collapse prematurely.

Past Gaildorf, the location of Mahle’s valve train production and home of the Gaildorfer MSC, which is known for its international motocross races, the Wide Glide glides on a mostly well-developed route to Untergroningen. There at the brewery inn “Zum Lamm” – show curve directly in front of the rustic wooden tables on the sidewalk edge – right towards Leinzell.

The Idyllic Road lives up to its name once again, hopping like a brown hare hooking its hooks through a lovely undulating sea of ​​forests and meadows to the Frickenhofer Hohe. Of course, the 310-kilo chunk from Milwaukee always follows.

The narrow 21-inch device dances in high spirits on the mended parquet. With a slight tingling sensation, the boot heels drag in one bend or the other over the gray asphalt carpet. If that’s not enough fun for you: In Eschach-Seifertshofen, the Swabian Farming and Technology Museum, in Rotenhar, the Schnitzelfabrik asks you to stop. Even if you want to stop the time in such moments and areas: Somehow it always goes on, even here. Between 1983 and 1990, the nearby Mutlangen made headlines because of the protests against the stationing of the nuclear Pershing II missiles at the time. It was a long time ago, today not only church towers but also wind turbines peek peacefully into the sky on the Frickenhofer Hohe.

As a forerunner of regenerative energy concepts, there were once 26 water-powered grinding and saw mills in the Welzheimer Wald, many of which can still be visited. A particularly beautiful example is the Heinlesmuhle near Hellershof. Dreamily located in the valley of the Black Red, the wheels rattled here as early as the 12th century. Toolmaker Gunter Furstenau (58) married into the Heinlesmuhle and now runs it as a leisure miller to switch off from his job. In addition to the stream and the surrounding nature, the tranquility is idyllic for him. 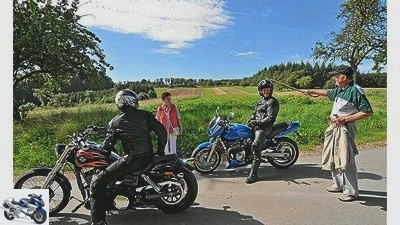 Paradoxically: “When the rushing water is gone at night, I can’t sleep.” You can sleep wonderfully in the guest rooms of Eddi’s biker residence. The restaurateur and Honda Fireblade fan, who has been known in the Welzheimer Wald for years, runs a newly furnished motorcycle inn in Althutte with interesting offers for club life, eating, drinking or staying overnight after major investors “flattened” his old biker hangout at Eisenbachstausee. Other meeting places for motorcyclists are very close to the mentioned Ebnisee, where bikers argue about whether the show curve or the coffee quality are more important criteria for a reasonable meeting, as well as a little further north on the Lowensteiner Platte.

Back in Welzheim, where the arrival of the idyllic researchers does not go unnoticed. “Would you like to have another cappuccino?” Elide Badin calls out to us from the “Garda” ice cream parlor. And as soon as we have sat down, we ask: “Do you know Giacomo Leopardi?” The idyllic theme has evidently drawn concentric circles like a stone thrown into a lake.

They should end at this point with excerpts from Giacomo Leopardi, an Italian count and poet found on the Internet: “Through his radical nihilism and a relentless self-analysis, he created the style of cosmic pessimism. (…) Clever skepticism towards the nineteenth-century mania for progress, gullible positivism and nationalism. ”Let’s see what bizarre stories we can dig up on the second round of Idyllic Street. 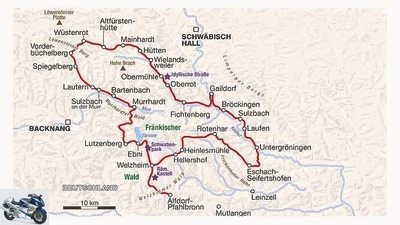 To the north-east of Stuttgart, the Idyllic Road winds through the Swabian-Franconian Forest Nature Park: An Eldorado for everyone who, instead of just rushing, likes to linger – at motorcycle meeting places, bathing lakes or water mills.

getting there
The area presented is completely enclosed by motorways (A 6, 7, 8 and 81). Welzheim, often the starting point for the Idyllische Strabe circuit, can be reached from the north, for example via the A 81, Mundelsheim exit; from the south via the A 8, exit Aichelberg.

Literature and maps
There are no travel guides specifically for the Idyllic Road – but this may even be very helpful with this topic, because it is useful for carefree relaxation. If you still don’t want to be uninformed, we recommend the volume “Excursion destination Schwabisch-Franconian Forest” from the Silberburg publishing house, designed by Dieter Buck for hikes and bike tours, for 14.90 euros. Even if the signs, symbolized by a white bird on a green or brown background, are usually good: At some junctions there are no indications of the course of the idyllic road. Every now and then it can also be worthwhile to leave the given route and research for even more “idyllic” side routes. In such cases, the “Shell Regional Map, Sheet 14” on a scale of 1: 150,000 for 7.50 euros can help. More precisely: “The leisure map” from Allianz on a scale of 1: 100,000; Because of the cut of the sheet, sheets 26, 27 and 28 are necessary for full coverage for 6.95 euros each.