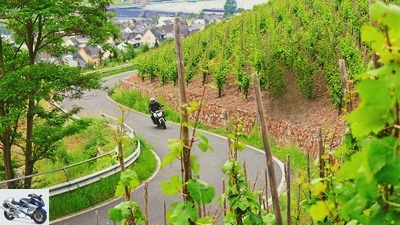 Out and about in Germany: Along the Moselle

Germany: Along the Moselle
Everything in flux

The Moselle for motorcyclists: small roads, including old mountain racing routes that wind up from the wine-blessed river valley to the Eifel and Hunsruck heights. Ideal for fans of sloping positions and those who enjoy it.

Along the Moselle part 1

The applause curve too? ”Asks Peter Schmitz, motorcycle owner in Liesenich and profound connoisseur of the best routes on the Moselle. We are currently trying to draw up a battle plan for the next few days. Which is about as difficult as choosing the best drops from a well-stocked wine list. At least one thing is clear: Instead of just chugging along the Moselle, you should leave the river valley every now and then and screw your way up to the heights of the Eifel and Hunsruck on corkscrew-like streets as often as possible. With or without a detour to the applause curve near Cochem, which regularly hosts racer and gendarme games on weekends, it doesn’t really matter. The area can also be beautifully sloping elsewhere. And if you don’t want to expose yourself to the suspicion of useless driving back and forth with all the cheerful hustle and bustle, you will of course find many destinations on the Moselle where it is recognized that it is worth taking a break from the heated engine.

Germany: Along the Moselle
Everything in flux

For example in castles, where Willi Haberkorn not only runs the “Hotel Aroma”, but also shows his private motorcycle collection right next to it and is happy to allow visitors to take nudes of various naked bikes, mostly German pre-war models from Imperia and Opel, for example. A little more information on the weather and water level – the sunny Lower Moselle is considered the second warmest and driest region in Germany, the record high water in the winter of 1993/94 reached the yellow bottom edge of the first floor of the Willis Hotel – and then the cooling water of the FZ1 is properly heated brought.

There is probably no way around the majestic Eltz Castle 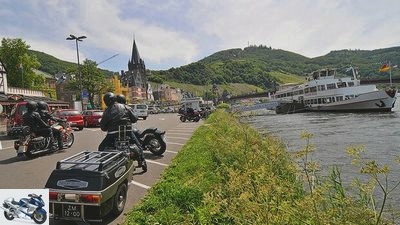 Where river travelers and asphalt cowboys like to drop anchor: Bernkastel-Kues.

Past the Thurant castle ruins, you quickly go from Alken to Pfaffenheck, a route that certainly adequately ennobles and describes the predicate “old mountain race route”. Take a break on the Hunsruckhohenstrabe to Buchholz, then turn right again and back to the Moselle. To be precise, to the majestic Eltz Castle, which there is probably no way around. Happy if you know the caretaker there or if a KTM supermoto car park attendant waves through. Everyone can decide for themselves whether it is worth eight euros to enter the castle, which may still be known from 500 mark bills. Either way, the journey via Moselkern, Lasserg, Munstermaifeld and Wierschem is worth the detour.

The dangling from Muden via Mudenerberg to Karden comes from Peter’s private treasure chest, in other words: his collection of beautiful routes. Below the ever-shrinking river, in front the asphalt that hardly ever leads straight ahead, above on the slopes the ripening grapes for hearty, full-bodied, bouquet-accentuated wines – heart, what more could you want? A sip from the serpentine bottle rarely comes alone on the Moselle, so next we sway from Pomerania via Kail to Klotten, under the tires again a hill climb route for the last few kilometers, this time even a current one.

The Moselle promenade in Cochem resembles an overcrowded paddock on beautiful weekends – not least thanks to the Italian ice cream parlor “Bortolot”, which has been decorated several times for its sophisticated creations. The city quickly abandoned the plan to close the area to motorbikes after protests by local restaurateurs.

There is nothing against it today with a visit to the striking imperial castle of Cochem; and the “Big Evening Trip with Dance” on a tour boat must take place without us, scusi. Then rather the ominous applause curve, embedded in a fast-paced circuit Cochem-Landkern-Buchel-Cochem. Tip to all low-flying pilots: It’s only about 40 kilometers to the Nordschleife. And for those who didn’t know: At Buchel, the location of Fighter Bomber Wing 33, there are probably 20 US atomic bombs stored. At least the WikiLeaks and other sparrows whistle from the underground bunker roofs.
And now for the rendezvous with the Apollo butterfly.

Along the Moselle part 2

The conspicuously spotted butterfly is almost extinct in Germany, larger populations can only be found on the Moselle, for example in the vineyard terraces between Cochem and Bremm. Provided, of course, that the fine butterflies do not shy away from FZ1 & Co. However, the end of the butterfly search should be at the latest when it goes from Bruttig to Fankel to Altvangig, always looking for the right speed. “A good mood route, some colleagues come here especially from the Ruhr area on Sunday mornings,” explains my local companion.

Vintners are also exposed to strong adrenaline rushes, at least when they work in Bremmer Calmont, the steepest vineyard in the world, and have to rope up. How good that between Bremm, Beuren and Alf you just have to make sure that the 150 horses of the Yamaha do not go through. If you like to use the mountains as a vantage point, please: Above Punderich, on the Reiler Hals, there is a marklin-like view of the longest railway slope viaduct in Germany with 92 arches. The route, which was once used by the Wehrmacht to transport ammunition, is still known today as a cannon train – or alternatively as a drunkard, as the thirsty traveler could order the wine with which the winemaker was to receive him at the Reil train station in Zell, for example. 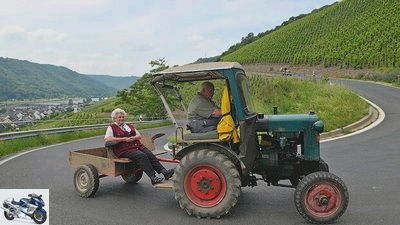 Serpentines for seniors when they are tired.

Lookout points also rarely come alone on the Moselle. From the pretty Enkirch a bumpy road leads to Starkenburg, there then a dirt road to the panorama point with a view of the river bend and Traben-Trarbach: already beautiful. But just a foretaste of what the Grevenburg ruins will have to offer a little later: a 20 percent incline or incline including a nasty serpentine that is guaranteed to tip over for the inexperienced, plus a cultivated viewing terrace under linden trees, where you can’t just look enough. “What comes next is for me the best thing there is to drive here,” agrees Peter on the ten kilometers from Traben-Trarbach to Longkamp. Who wanted to contradict? Appetizingly fresh asphalt and a route like an alphabet soup consisting of all S and U: Well get it! Plenty of grapes, visitor grapes, then in Bernkastel-Kues. The double village at the foot of the Landshut castle ruins, separated by the Moselle, is an extremely popular point of contact for buses and steamers – and precisely for this reason it also triggers the reflexes to flee. So farewell to “Theodor Heuss” moored on the bank, cast off for the Yamaha.

With a north-west course we cross to the small wine-growing village of urzig, sniff a good pinch of views in a guaranteed flood-proof location on the slopes of the Moselle, marvel at overgrown vineyards thanks to EU set-aside premiums and finally head back down to the river. This time the liaison shouldn’t be so fleeting. Even if the cruising mode is hardly his domain: the bolide accompanies the Moselle with a quiet babbling on the broad carpet of the federal road, taking on the parade of the prominent locations like a head of state. Krover Nacktarsch, Burger Hahnenschrittchen, Briedeler Herzchen, Zeller Schwarze Katz – all of this really works best without a hunt. The calm before the final storm. 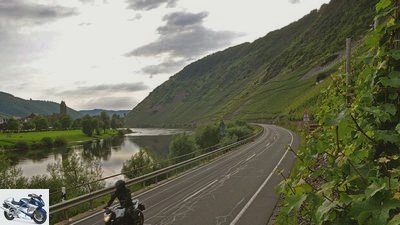 Driving along the Moselle is rather leisurely – the interesting roads are, however, a bit away from the river.

“Everyone wishes what they want, God give them so much again,” it says on the facade of the cute little chapel in the Merl district of Zell. “Great curves and the best time”, one would like to add spontaneously to the slogan. In any case, God meant it particularly well here and brought us the route from Merl to Grenderich, the annual venue for the Hunsruck mountain race. A few hairpin bends and bends in the river, on the other hand, you will find the ideal pavement to discover slowness, the idyllic 150-soul nest Beilstein, also known as the “Sleeping Beauty of the Moselle”.

An emancipated goddess of wine in the form of the fun-loving winemaker Marie-Theres Hess from Bruttig-Fankel invites us to sample the delicious grape juices in her vault in the evening. Then we would give a kingdom of heaven for a Harley with a trailer to transport all the bottles that one would like to take home after such a tasting. Tip for small luggage: a bottle of Elbling Classic, Chefin’s favorite wine, made from the oldest grape on the Moselle. 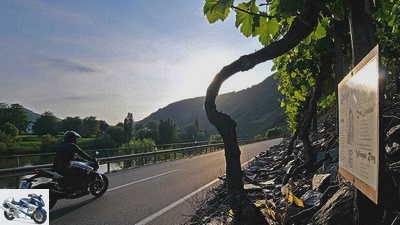 The straights on the Moselle are short but very beautiful.

The German Corner in Koblenz and the Porta Nigra in Trier are undoubtedly a must on a Moselle tour. Too boring or already known? Then quickly to Binningen to Motorradsport Schmitt. A top address, known among other things to all motorcycle hotels in the region. Company owner Charly is helpful even at night to replace broken chains or to get new tires on Sundays – even if it’s a hit slick. His son Kevin also has petrol in his blood: the GSX-R 600 driver recently won in Oschersleben as well as the 1000 kilometers at Hockenheim (and finally became two-time German champion in 2010). Where he probably learned that? 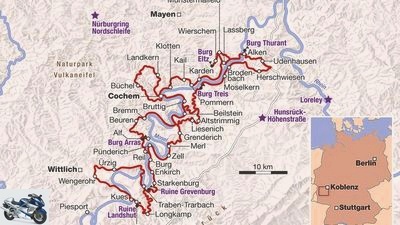 Who would have thought? On the Moselle there are not only good wines, but also so many brilliant motorcycle routes that you often want to cry for joy.

getting there: Whether fast on the motorway to Koblenz or Trier, whether winding through the Eifel or the Hunsruck – the choice of the optimal route to the Moselle is ultimately a matter of taste, as is the case with wine. 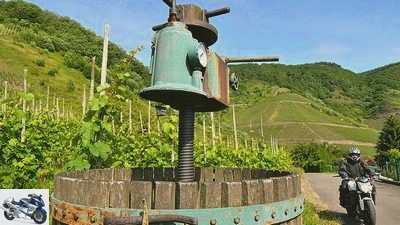 There is a lot to discover on a tour through the Moselle: the old wine press near Bremm.

Literature / maps: If you don’t want to go into the blue on the Moselle, you will find interesting facts about the country and its people, each under the title “Mosel”, in the Marco Polo travel guide for 9.95 euros and in the Dumont travel paperback for 14.95 euros. For orientation on the way, we recommend the Allianz leisure map “Rhine / Mosel / Southern Eifel” on a scale of 1: 110,000 for 6.95 euros; A leisure guide with 66 tips for excursions is included in the price.