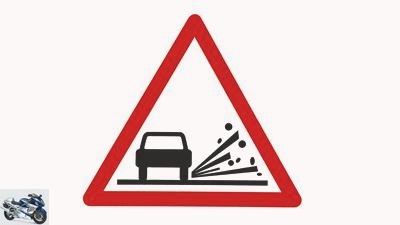 Petition against gravel in France

Petition against gravel in France
Cheap, fast, but above all dangerous

A petition is currently running in France to draw attention to the dangers of grit as a common road repair method.

You should at least be warned of such sections in good time and, ideally, a detour for two-wheelers should be signposted.

Anyone who drives a motorcycle in France from time to time probably knows this frustration under the helmet when the gravel sign comes into view. Often, kilometers of sections have to be carefully scanned while rolling and the sobs under the helmet get louder in every nice bend.

Of course, this doesn’t just bother motorcycling tourists, but also local bikers, which is why there is currently one in France Petition against the road repair method “Chippings “ runs.

Roads are regularly repaired after winter in the following way: First, a layer of tar is applied to the existing asphalt, followed by a second layer of gravel. Cars, trucks, motorcycles, scooters and cyclists now all contribute to the gravel forming a solid layer with the tar. The whole thing takes a few days, depending on the traffic. And what remains is always a layer of gravel, which is often not vacuumed from the road as prescribed, but remains there until the traffic and perhaps also one or the other shower clear the road.

Every year falls from grit

There are two understandable reasons why our French neighbors use this method to repair their roads: The method is inexpensive and not particularly time-consuming. But it is also dangerous – especially for scooter and motorcycle riders as well as cyclists. Every year there are falls on the gravel roads.

In a first step, the petition aims to ensure that there are reliable and timely warnings of gravel sections and that there should also be detours for two-wheelers in the future. In the medium term, however, the initiators have a ban on this method of road repair in their sights.

Classic case of balancing interests: save costs and repair roads quickly and efficiently or more safety for all road users – including two-wheelers. We hope, of course, that the petition will make a difference, but we are not particularly optimistic.