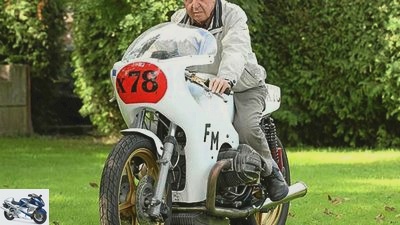 At the end of the 1970s, Werner Fallert gave wings to a boxer engine with vertical shafts. The resourceful Baden tinkerer turned 80 in January 2012. And to this day, he cannot stop tinkering.

It took Werner Fallert, head of a BMW car and motorcycle company in Achern, four and a half months to build a vertical shaft boxer in 1977 based on a design by the Graz engineer Ludwig Apfelbeck. His mechanic Hans Schmid and the racing expert Fritz Klager from Freiburg actively supported him. The “Konigswelle project” came at a time when the Japanese could already look back on ten years of experience with high-performance, large machines and the fans of the white-blue brand from Munich were still longingly waiting for a sporty, fast BMW. What Apfelbeck developed in theory and  Fallert consistently put into practice in the winter of 1977, was the dream come true for many motorcyclists. You have to bear this in mind: In November 1977, Apfelbeck sent the technical drawings. And in April 1978 the engine ran for the first time.

Fallert had the sand casting molds made by a model carpenter. The specially built positive forms of the engine are unfortunately no longer available today. But what a tour of the Fallert’s cellar brings to light are the slightly dusty molds of the engine. Numerous still unprocessed magnesium blanks are stored on shelves – four-valve cylinder heads, valve covers and engine housing halves. Cardboard boxes full of pistons from Mahle, boxes with rocker arm blanks and other engine internals can be found. Even Apfelbeck’s drawings still exist.

Could it be possible to build a complete bevel motor from the existing parts? This question shoots through my head. When I started my two-wheel mechanic apprenticeship at Fallert in the 1990s, I knew little about this ingenious engine. For a long time one copy was on display in a glass case in the sales room and always attracted me magically. The peculiarity of the engine cannot be reduced to the eponymous vertical shaft drive. The air-cooled 170-degree boxer also comes up with a sophisticated single-cam control. A single cam actuates two fork rocker arms per cylinder, which in turn open two inlet and outlet valves. The whole structure is trimmed for sporty lightness, not least characterized by the cast magnesium parts.

In the 1980s, the Fallert engine caused a sensation and considerable success at European hillclimb races, the open Austrian Superbike series and the Battle of Twins races: Austrian racing driver Konrad Stuckler won the Julbach hill climb on a vertical shaft racing machine, among other things with a new course record. And in the Battle of Twins race on the St. Wendel circuit, he won with almost three seconds ahead of his pursuers. On the straight in St. Wendel, the Fallert BMW ran through the light barrier at a whopping 256 km / h. The participation of the over 120 hp racing car in 1981 at the Bol d’Or in Le Castellet, France, proved its reliability and should serve as an endurance test for a possible series production of the FM 1000. Unfortunately, it stayed with this dream. But it shows the ambition with which Fallert pushed his projects forward. 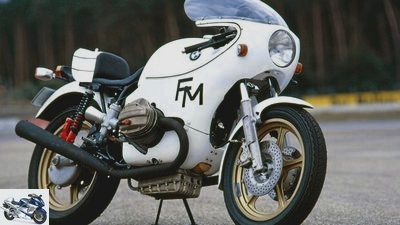 In 1978, MOTORRAD subjected the FM 1000 to an extensive individual test. At that time the engine was in a heavily modified BMW chassis. The gearbox and cardan also came from the BMW boxers.

I practically experienced this ambition firsthand during my apprenticeship in the early 1990s. Fallert was already at an age at which most working people would look forward to their well-deserved retirement. He had just left the dealership and was concentrating on the motorcycle business with BMW. He finally had the freedom to work on his projects, as he says today. Before that, it was just tinkering between door and hinge, between motorcycle and car repair shop. Because his great passion has always been the development of new parts, and not just for motorcycles. I remember well how he regularly showed up in the workshop in his work coat and tinkered with something. Sometimes he worked on a light motorcycle trailer that could be folded up and transported on the car trailer coupling when empty, thus circumventing the speed limit for towing a trailer. Another of his ideas dealt with the optimal fit of motorcycle helmets – and we workshop employees spent several months doing strange experiments. In his opinion, the commercially available crash helmets were not suitable for every head shape. Countless attempts to inject the right mixture of two-component foam into a hose form sitting between an artificial head and a helmet shell regularly ended in a sticky mess – which the apprentice was allowed to clean. Later he is said to have carried out such experiments on living people, as I heard. Fortunately, that was after my time. We often gossiped about his ideas, it felt like the whimsy of someone possessed. Today he can smile about it himself. At that time, he applied for a patent for the “crash helmet with body-friendly padding” and even peddled his idea to helmet manufacturers. He wasn’t too fine for that. On the contrary: When he got something in his head, he consistently pulled it through to the end.

He also developed tuning components for the newly launched BMW four-valve boxer. Together with his mechanic Hans Schmid, he designed lighter rocker arms to reduce the moving masses of the new boxer. For days, a motor hummed with monotonous speed on the workshop’s own test bench in order to test the parts for their function and stability and then to be able to include them in the tuning catalog.

At the age of 81, Werner Fallert cannot stop tinkering and tinkering. It is part of his life, like the BMW brand and the two-valve boxers. Under the label “Fallert MDesign”, he produces light underseat exhaust systems made of stainless steel for the modern generation of boxers. Of course, he put them to the test. Not only do they sound more robust than the original, they also ensure more even performance and allow two equally sized cases to be mounted on the sides. Although he does not do mass production, his exhaust systems and low seat, which he offers for the GS, are well known in the BMW scene. 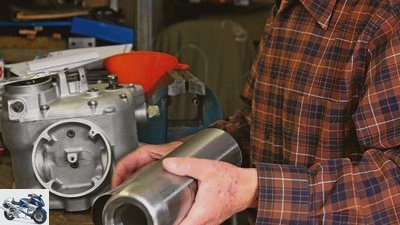 In everyday life he prefers to move his R 80 G / S. It goes without saying that he has given your engine performance-enhancing measures. And if possible, he takes part in veteran events with his old BMW R 51. Werner Fallert has not lost his dry sense of humor, despite many setbacks in his life. Regarding his participation in the Schottenring race last year, he says: “I mostly started from the front rows. Only in 2011 not. I had to start from last place and still won a trophy. ”It was the trophy for the oldest participant in the event.

Werner Fallert has set himself high goals again for 2012: He wants to make the white FM 1000 fit again for the veteran race in Schotten. And of course he wants to drive it himself. We can only hope that he can enjoy good health for a long time and that the ingenious upright shaft motor at least regularly inspires the visitors of classic races.