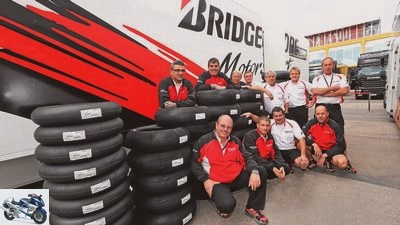 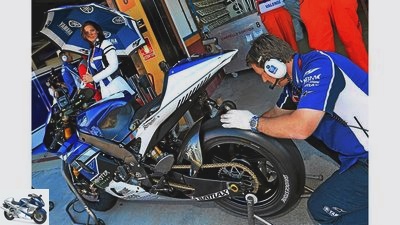 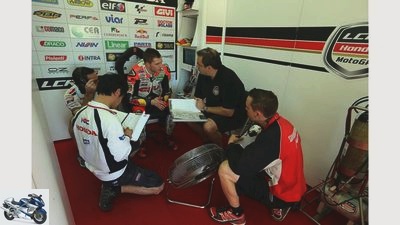 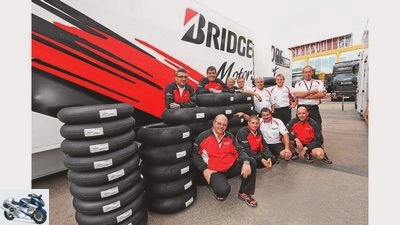 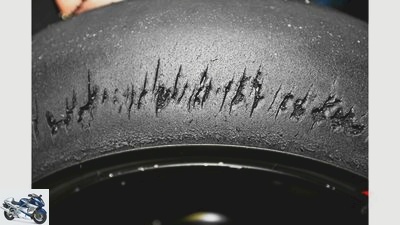 4/10
The fact that the maximum ten laps were the maximum was shown by the rear tire of the disqualified Marc Márquez, who had reeled eleven laps and whose tread looked as if a shark had bitten into it. 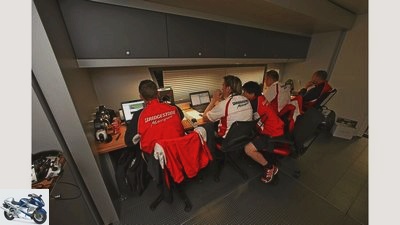 5/10
The computer analyzes of the Bridgestone technicians as well as the precise assessment of the tires take place behind closed doors in the semi-trailer after the race. 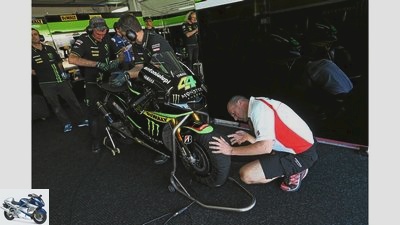 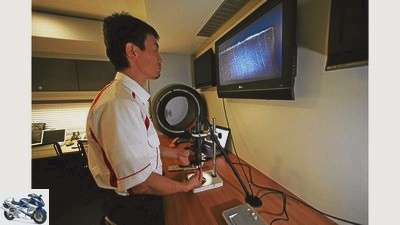 7/10
After the race, a microscopic analysis is due. 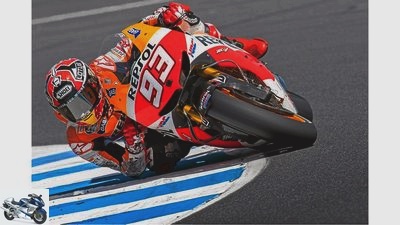 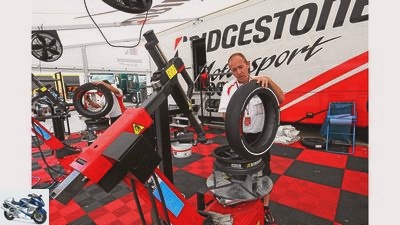 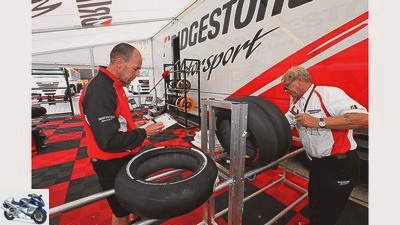 And one more degree of lean angle, one more and one more. Even superstars like Marc Márquez are amazed at the performance of current MotoGP tires, which have been developed to perfection over a decade. A visit to the weirdest tire service in the world.

The Japanese engineer pushes a piece of tire tread under the optics of the electron microscope and stares intently at the structures that appear on the computer screen. Insignificant to laypeople, the macro shots are among the holiest of all of the Bridgestone racing service. Just like the finger-length tire samples cut from the tread. Analyzing them, figuring out the ingredients and recreating a current MotoGP slick would be a breeze for the competition.

And that would jeopardize years of development lead. The almost 60 degrees incline that can be achieved with Bridgestone MotoGP tires is less important than the propulsion, which is still possible in the limit area. “If you go to the limit, if you are really pushing, you will realize how extremely far you can go with these tires,” marveled Marc Márquez, who paints black lines on the asphalt at will when accelerating in an inclined position. It is equally impressive the tough stamina over a complete race distance.

There is only one limitation with this performance, and that is the maintenance of the optimal temperature window. One of the routes on which this is particularly difficult is the Sachsenring. There are many left-hand bends, some with very long radii, in which a lot of heat builds up in the left flank of the tire. In return, the right tire flank cools down, which can conjure up uncomfortable situations in the remaining three right-hand corners. Especially in turn eleven behind the paddock, a 200 km / h downhill right bend after seven consecutive left turns, it crashed particularly often. But Bridgestone was able to react and had asymmetrical slicks in the luggage, where the spread between the soft mixture for the right and the hard mixture for the left flank was particularly large.

Bridgestone also offered an extremely wide spread between the compounds for the front wheel. The particularly soft option was popular on the cool mornings; for the warmer afternoon, the field then converted back to a tougher version suitable for racing.

If Bridgestone got the problems under control by race Sunday at the Sachsenring, the Australian Grand Prix already had a red alert on the first day of training. Instead of a tolerable 130 degrees, the Phillip Island slope, which had always been feared as tire-killing, suddenly rose to 185 Degree of rubber temperature measured. Even when we returned to the pits, the sidewalls of the tires were still up to 140 degrees – and the chemical reactions below the tread were out of control.

The routine access to the microscope was suddenly of decisive importance: Now, after cutting open the individual tires, the engineer was able to prove on Friday evening that the tread was beginning to detach itself from the carcass with air bubbles the size of a pinhead. A disaster was looming, triggered by a fatal chain of adverse circumstances. Firstly, in December 2012, the track was given a new, sharp-edged surface that dovetailed with the tire tread to an unprecedented level. Second, the new asphalt surface ironed the old bumps smooth. While these had repeatedly allowed short, temperature-reducing rest phases, it was now under permanent maximum load through the curves. Thirdly, instead of the normally cool early spring temperatures, suddenly midsummer weather prevailed. And fourth, a lot of greasy oil had evaporated from the new asphalt in the past few months. The grip and aggressiveness of the surface had increased significantly – and increased with every training lap on which additional rubber abrasion stuck.

After Friday, Bridgestone banned the use of the softer mixture. On Saturday morning, the harder version also showed the symptoms of stress, whereupon the technicians conjured up an extra-hard emergency mixture. When this also failed, the race was shortened and split into two.

The fact that the ten laps were the maximum was shown by the rear tire of the disqualified Marc Márquez, who had completed eleven laps and whose tread looked as if a shark had bitten into it. The tire would hardly have survived another lap. However, it would not have exploded like it did at Shinya Nakano in Mugello in 2003, when it literally tore the rear tire of the then Kawasaki star at 340 km / h. The crossbelt construction of the carcass was changed after this spectacular accident, with the newer monospiral construction such major damage is as good as impossible. “The air would definitely have stayed with Marc’s tires,” assured Bridgestone technician Peter Baumgartner.

The events in Phillip Island are seen less as a scandal by Bridgestone, but rather as proof that “tires are not just black rings, but highly complex developments that, like the racing machines themselves, work at the limit,” as Bridgestone’s racing Chief coordinator Thomas Scholz expresses.

These developments are just as important for the show as they are for the safety of the drivers. Although the contour of the tires goes back to 2008, the carcass construction and tread compounds have changed again and again. In 2012, at the insistence of the drivers, a tire was introduced that heated up faster and offered the driver sufficient safety just a few corners after leaving the pit lane. It was the same year that the engine capacity was increased from 800 to 1000 cm3.

New tire offers a lot of grip on the flanks

In the two years since then, Bridgestone engineers have observed how the main load on the tires has shifted from the outermost flank inwards towards the traction area. In keeping with the driving style, which turned from the long curve radii, almost similar to the old 250 cm³ class, to the pointed “aim and shoot” style, in which the driver brakes as straight as possible towards the apex of the curve, then flips back as quickly as possible straighten up and use the torque of the huge engines for optimal thrust. “Surprisingly for us,” says Peter Baumgartner, “the tire temperatures tend to be lower with this driving style.” As a result, more soft compounds were in demand. The toughest one took part in a few races, but was declared unusable by the drivers, which is why a further development step was taken for 2014 in response to Baumgartner’s change. The new tire is also considered “hard”, but still offers a lot of grip on the sidewalls. How this was achieved – a multicompound tread with a matching carcass construction – is difficult to elicit from Bridgestone technicians, even for money and good words.

Because secrecy is part of the business, even towards the stars. When Marc Márquez wanted to take his used rear tire home as a souvenir after winning the title in Valencia, the Japanese Bridgestone manager Hiroshi Yamada waved it off. Márquez received only one of those technically insignificant tires that are only fitted for the transport of the racing machines. But at least the Bridgestone crew scratched their heartfelt congratulations on the transport rubber.

How is it that a German crew pulls off the Bridgestone MotoGP campaign?
As early as the 1980s, we saw crazy wildcard drivers with Bridgestone stickers at the Japanese Grand Prix. That made it clear to us that the Japanese had racing tires that worked. The then German sales manager came up with the idea of ​​including these racing tires in the sales program. From 1988 we then offered racing tires on a national level and thus had the logistical prerequisites to offer a racing service internationally. When we started in 1991 there was no other country in Europe where Bridgestone had a national racing service. A contract was signed with Bridgestone Germany in which the Japanese asked us to provide the logistical prerequisites for the Grand Prix service. In 2002 the MotoGP entry was decided. Since then, things have been going well!

The Claiming Rule Teams were previously given tires that were one notch softer than those of the factory teams. Will that be maintained?
Dorna would like to continue to do so in order to enable the drivers of Production Racers to catch up in qualifying and to enable highlights such as Espargaró’s fifth place on the grid at the Sachsenring. But we have to collect and evaluate data at least until the second Malaysia test at the end of February, before we can make this decision. We have to find out whether the new Production Racers are so close to the factory machines that they would have to drive the same tires. We also have to closely monitor the performance of the remaining CRT bikes.

How is Bridgestone reacting to the problems in Phillip Island?
The necessary test in Phillip Island has already been scheduled for March 3rd to 5th, with the six factory riders from Honda, Yamaha and Ducati, because we definitely need the fastest riders to analyze the problems. We will bring a whole range of tire variants and use our experience to assemble the tire that we then bring to the race and that loses as little grip as possible.

Which driver was the best from Bridgestone’s perspective in 2013??
Marc Márquez – for us he was the easiest of all. He never complained, nothing really bothered him. Over the year he has climbed to a level that probably surprised him too. He would probably have won on a wooden wheel too.

Bridgestone is planning a further development of asymmetrical tires?
This is still under discussion, but has not yet been decided. At the same time it is discussed to change the curve of the Sachsenring a little. Then it might not make sense to bring another tire – a special stuff ring edition – as well.