Fashion is neo-retro! It’s neo-retro! That changes and that means that we can have fun with a cool shot without having to go fast! Well, that’s exactly what Rieju offers with his Century 125 presented at EICMA. Rieju is Spanish, therefore not Chinese, which means a good finish and for a bit of history a builder dating from 1934! It’s almost old 1934, so one more reason to go old with new (and not the other way around). But still, when you are more used to the brand’s off-road motorcycles, the Century 125, that changes. This is the change. It gives a youthful touch. But is the ramage up to the plumage? Two-week trial of the little novelty, under the sun … and the rain, a lot of rain… 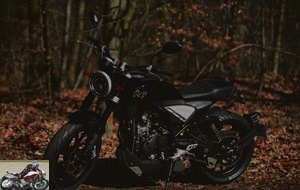 It’s not easy to offer a nice looking machine, without falling into the copy or the weird thing (the Nuuk for example, but we get out of the subject). But there, Bingo! The Century, it slams! It’s already the overall line that is nice, with this round front headlight but with a nice LED signature, this saddle that looks customized, this old-school shaped tank, this wide handlebar that promises a cool position. At the front we find a pretty inverted 40 mm fork, rewarding. The cylinder shock absorber adds a qualitative touch, not to mention the license plate almost placed on the tire. Original Mitas, optional Michelin. The look of the original Mitas, with studs, is just superb, especially since they are very round and give the impression of a big one. In comparison, the Michelin are very thin, better for handling but less good for the look. The original two-flute escapement is super nice even if you can install a more rewarding Ixil as an option. The pencil stroke is homogeneous, with a nice line both general and in detail. 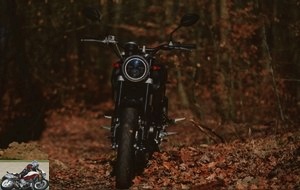 Under the plumage, we have a small liquid-cooled 4T single cylinder of 125 cm3 developing 15 horsepower for a torque of 12.3 Nm, the maximum that can be asked of a 125 to remain legal. This is not the case with all 125s, some of which are limited to 10 horsepower. Here they are all there, at least on paper. 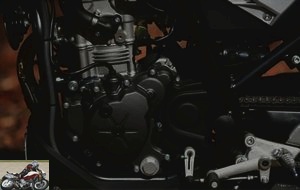 It may be a 125, but the saddle peaks at 785 mm and the driver of 1.70 will therefore barely put both feet firmly on the ground. But with only 135 kilos, even a featherweight will be comfortable on the handlebars, especially since the position is natural. We put our hands in a significantly enlarged way with a nice overall position. On the other hand, if the tank offers a real look, it is way too wide at the crotch and makes it difficult to squeeze the knees at the tank, unless you step back..

In front of us, we have a superb fully digital counter with all the information: speed, tachometer, fuel gauge, clock, trip, engine temperature. It is really cool this meter. There is even an indicator indicating the crutch is unfolded. 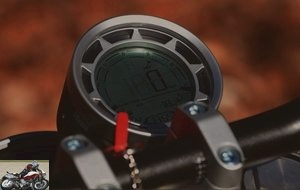 The mirrors are easily adjusted and are effective at reflecting a good image to the rear.

If the crutch folds up easily, unfolding it when stationary requires going to look for it behind the footrest and is not always the most practical.

The small mono snorts gently with a high idle at 2,000 rpm. We leave it a few minutes to warm up and see the engine temperature stop flashing on the right and at least one or two sticks light up. First, gentle, that we accompany gently so as not to stall and he sets off. 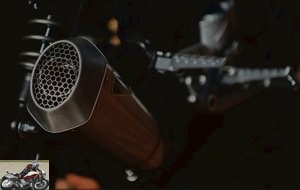 The starts are downright laborious but once launched, the small mono is full of pep especially as its box, well staged, does not systematically bring it to the switch. We accelerate, we switch gears by ear and it gives a little mono full of life in the towers. Because if we can completely roll on the last report at 40 km / h, the times are particularly slow and the mono pounded well under 3,000 rpm, or even under 4,000 rpm! In fact, to have a nice machine, it is better to stay permanently above 6,000 rpm, especially since it has a good extension up to 10,500 rpm with a pleasant range of use. daily, even if we juggle a little with the speeds. Fortunately, the box is easy and precise. Suddenly, in town, it is more between third and fourth gear, especially if you drive cool … in particular to avoid vibrations on the 2nd report when you start to be in the towers. Vibrations that we forget about the following gears and which make the third gear the ideal ratio in town, to drive quietly between 20 and 50 km / h (at 6,000 rpm) while allowing sharp acceleration on the 70 km / h zones. 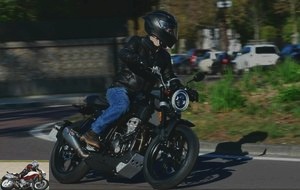 Maneuverability and ease of handling

The 125 really flourishes on small departmental vehicles, all the more so as it is maintained above 6,000 rpm, or even 8,000 rpm, with real vigor. This can give the impression of a restricted range but it is not, because the box is well staged and if you play a little with the selector, the machine is really playful to string together the virolos brilliantly..

In fact, the first two reports are almost long, with a first up to 30, then the second to 60, each subsequent report bringing 20 km / h better. 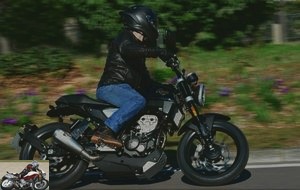 The 125 is very light and does not provide any protection. However, as we have seen, the sixth and last report allows the motorcycle to be launched well to 130 km / h, counter, solo and 10 km / h less in duo. If the road is wrong flat and hill, we go down to 100 km / h, where on the same coast, some 125 are struggling at 70 km / h! So the mill really has some in the trunk and really sends out all of its 15 horsepower. However, the machine is very light and in the event of wind, we quickly get back to the right lane; improved behavior as a duo (for once) with the addition of the weight of the sandbag that you have with you. You just have to choose it neither too light nor too imposing, depending on the route you want to do. 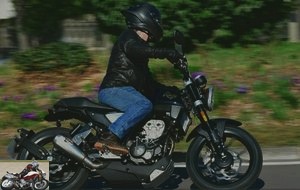 The wave brakes are really nice. But in addition, they do the job well by providing a good feeling. No ABS here, but CBS combined braking not at all intrusive, including in the wet. With 2 kilometers on the clock, however, the first kilometers required a good break-in before seeing the braking really kick in. Soft, but then really very soft or almost non-existent at the start of the test, we finally found a braking worthy of the name after about fifty kilometers with still a little gain afterwards. In the end, no need to take the levers like a centurion to slow down the machine, with a rear brake even sufficient in town. In the end, we have consistent, balanced and pleasant braking, where two fingers are sufficient in 90% of cases to stop quickly and well.. 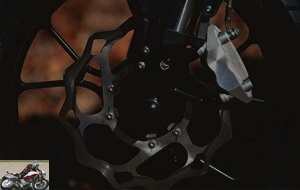 The Century is fitted as standard with studded tires with the most beautiful effect and which also have a very nice "bounce". Translation, they give the impression of being big and closer to those equipping a 400 than a 125. On the other hand, this type of tire does not offer the best grip generally in the wet, especially in exotic brands. It is completely optional to ask to equip it in Michelin Pilot Street. We lose very clearly in look, with a traditional road tire and especially very thin which refines the bike. On the other hand, we gain in grip. And road holding in the rain is transformed with a grip that gives permanent confidence, including on the white stripes. So, either you only ride when the weather is nice and you keep the original equipment, or the rain for you is not only in your head and you will opt for the Mich ‘.

For the passenger, the saddle is small and gives the same impressions as a sporty roadster. The legs are a little raised, even closer to a sporting position than a roadster. As for the handles well hidden under the saddle, they are too low to be used in a simple way, unless they are called Mr Fantastic. So this goes for daily but short trips. We will therefore avoid long walks … and especially in the rain. Because if the look is there, the rain rises well to lightly smear the back of the passenger if there is one, of the pilot if there is no passenger. On an urban but rainy course, I found myself smeared from the lower back to the helmet! In this case, it is better to wear a rain suit than the latest motorcycle leather.. 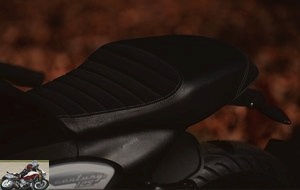 Rieju announces a consumption of 3 liters per hundred, quite real even if it is closer to 3.3 l / 100 or even 3.4 l / 100, in reality. This gives around 260 kilometers of autonomy with the 9-liter tank, depending on the driving! In fact, once full, the first stick does not fall until after 110 km! The other five sticks then fall every 20 kilometers until the last stick disappears. The passage on reserve occurs around 215 kilometers with a small fuel pump in the form of a yellow indicator. We then say to ourselves at 230 km that we will not be far from running out of fuel. But we only put 7.7 liters, so there is still officially 1.3 liters. 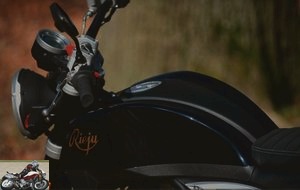 There is no room under the saddle, not even to place a disk unit. It should be noted above all that if there is a kind of flap at the rear at the level of the wheel, there is above all a large space between the rear of the saddle and this flap, which is totally ineffective in the event of rain. The passenger is thus smeared up to the shoulder blades and her back completely soaked in the event of rain. Remember your mountain bike rides in the forest after the rain and the state of your back, here it is the same. Full suit to provide for the passenger therefore, while for the pilot, comparatively, it will.

The Century 125 is first and foremost a crush in terms of looks which gives an impression of placidity which in fact turns out to be sportiness on a daily basis. Some kind of Doctor Jekill and Mister Hyde. You have to keep it for a few days to find pleasure in it, only limited by the shape of the tank annoying the inside of the thighs and the duo in the rain, unless you like to smear your passenger.

The technical sheet of the Rieju Century 125