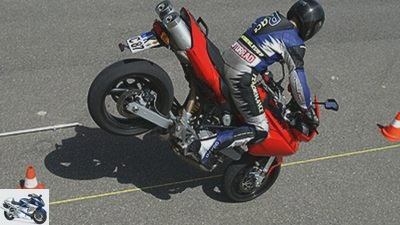 Just a mid-range motorcycle from Ducati or a real alternative to the 1000cc Multistrada? It’s not just about a good 20 hp and a price difference of 2900 euros, but also about the image. And about the very special qualities of the 620 that came to light in the top test.

Was there anything else?

Circular path, Ø 46 meters
Lap time 11.1 sec
vmax at the measuring point 50.0 km / h
Note: Speed ​​and time are limited by the side stand that touches down on the left. When braking in an inclined position, the front wheel folds in slightly. Only a slight tendency to erect when driving over the bump.

Little two has to hide-
cylinder by no means. On the contrary, the soft response, the twist-
joy and the classy sound
to compete with the 1000 engine. The 620 Multistrada has clear advantages with the better-
tuned chassis and great handling. If you can live with the lower performance, you can save the 2900 euros extra charge for the large one.

For an engine of this cubic capacity-
the Ducati is great-
Two-valve engine with a very even power delivery.
More points would be awarded for the easy-to-use clutch if its path was longer and therefore easier to control, and if it would engage earlier. Definitely too
long is the overall translation,
because already the fifth gear for
193 km / h is designed.

The 620 is characterized by great handling and high steering precision-
Landing gear off. With this tight yet comfortable ab-
mood nobody misses the lack of setting options
at the fork.

In the event of an emergency stop, during which the Multistrada remains very stable, the brake metering suffers from the short lever travel and the hard pressure point. Due to the relatively low power, a slap in the handlebar is almost impossible, whether-
probably the front becomes very easy over bumps. The view in the rear-view mirrors suffers in certain speed ranges from the strong engine vibrations, which sometimes even distort them.

The 620 loses a full ten points
in the theoretical range due to the high consumption and the
five liters compared to the 1000
smaller tank. The payload of 183 kilograms is very modest.

That somehow you sit differently on a multistrada, with that
can be arranged. That
However, seat cushions that are too soft are unreasonable in the long run. The higher disc brings advantages.

The high country road consumption of 6.5 liters per 100 kilometers also costs the 620 another eight points in this chapter
on the big sister. On the other hand, the maintenance costs for the 620 remain within reasonable limits, which also has a positive effect on the price-performance ratio.