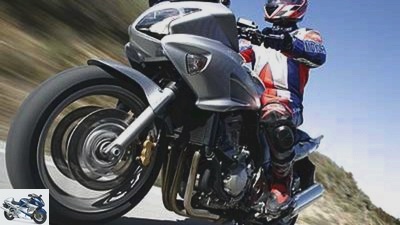 Amazing what can become of a super sports car. Honda combined the Fireblade engine with the chassis of the CBF 600 and turned it into a highly attractive all-rounder ?? at an even more attractive price.

Appearances are deceptive. The new gray mouse from Honda reveals itself to be a dazzling all-rounder. And one without a star-
allures. The chassis offers enough comfort and reserves despite marginal adjustment options, the domesticated engine from the Fireblade is a stunner, the ABS works brilliantly? and all at an attractive price.
The competition takes a deep breath.

Note: Even when braking hard with the hand and foot brake, the fine control prevents the rear wheel from lifting. The vehicle remains stable. When you step on the foot brake, the CBS composite brake also actuates a brake piston on the front right brake calliper. When only using the foot brake, an average deceleration of up to 6.8 m / s2 was achieved, which corresponds to a braking distance of 56 meters from 100 km / h. For comparison: With conventional systems, the rear brake decelerates to values ​​between 3 and 4 m / s2, which is at the same speed
corresponds to a braking distance of about 100 meters.

Slow slalom and circular path
Not passable due to the weather.

plus
Homogeneous engine
Very neutral, handy chassis
Excellent value for money
ABS available at a moderate surcharge
Adjustable position of handlebar,
Windshield and bench
Relaxed sitting position
Easy oil level control over
Sight glass
minus
Wind protection too little for tall drivers
Adjustment of the shock absorber a little too tight
Suspension settings
in the test
Neither on the fork nor on the shock absorber
the damping is adjustable. The only adjustment option concerns the spring-
base of the monoshock. In solo operation
the lowest level is also sufficient for heavy drivers; fits in pillion operation (depending on
Baggage) Level three or four

Big bike power ?? the one from the
Fireblade engine is one of the strengths of the CBF 1000. With the relatively short translation of the easy-to-shift six-speed gearbox, it scores points, especially when pulling through. Also good news: the drive train
has hardly any play, so the load change reactions in turns are moderate.

Less is more. The 160 mm rear tire is less of a visual benefit, but more of a handiness. The suspension tuning even fits without adjustment options for the damping. Only the shock absorber is a shade too tight.

Well done with composite brake
and anti-lock braking system, Honda does a lot for passive safety.
Only the actuation force could
be reduced. Despite ABS, the controllability and the feedback are good. It turns out to be helpful
also the narrow 160 rear-
tire that almost eliminates the righting moment when braking. Likeable: the good view
bidding rearview mirror.

CBF has everything you need,
but not anymore. After all: seat-
height, handlebar position and windshield are adjustable. The technology is easily accessible, the range and payload are practical.

The CBF plays its trump card with the smoothness of the four-cylinder engine, as does the dresser
Ergonomics. With the windbreak
there is still room for improvement despite the adjustable disc.

In terms of exhaust emissions, the Honda CBF with injection system and three catalytic converters easily undercuts the Euro 3 standard, and gasoline consumption is within an acceptable range. But it pulls its actual joker with an excellent price-performance ratio in this class.