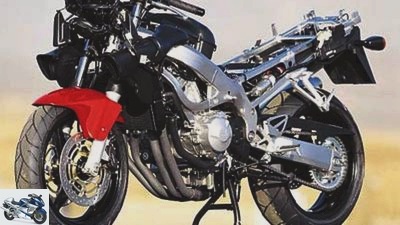 Sit back and close your eyes. Let yourself be kneaded and doze off in the bubbling whirlpool ?? or just swing on Honda’s newly refurbished CBR 600 F.

Fits, sits, wobbles and has air. The stupid craftsman slogan brings it to the Honda CBR 600 F to the point. At least when it comes to the incredible range of ergonomic conditions. Everyone can do it on the Honda. The tall Lindner, the petite Moni, Mini, Jorg, Stefan, the secretary, her fiance, the boss, the boss’s boss? simply the whole editorial team. That is quite something. After all, the Honda plays in the sports league, and comfort is not far from here, but is usually folded and hunched.

Not with the CBR. The recipe from 1987, when the first CBR 600 F saw the light of day in the form of a yogurt cup, is still good today: sporty driving pleasure without acrobatic contortions. Simply getting on and driving off won’t work for everyone with the CBR. Because of the electronic immobilizer and so on, nothing works without an original key with a built-in radio detection signal. Fun? S, the four-cylinder buzzes immediately and pushes man and machine with jubilantly high idle speed powerfully through the columns of cars. After a few hundred meters, the electronic injection regulates the engine back to a sonorous idle rumble, and the wellness cure can begin.

The Honda engineers have cured the new one from the weak draft of the carburettor-equipped predecessor. Only when the throttle valve is fully opened does a hidden rattle between 4000 and 6000 rpm draw attention to slight discrepancies, which the injection system, however, casually plays over. In addition, the muscle growth drives the CBR 600 F to performance that is impressive. With 105 measured horsepower peak power, the exhaust-gas-cleaned Honda is nominally eight horsepower below the measured value of the catalytic converters in MOTORRAD 25/2000. But since January 2001 the MOTORRAD test bench runs have been run with the new ECE correction factor, according to which there is arithmetically around two percent less performance on paper. When this is added, the difference shrinks to six horsepower. And if you compare the driving performance, there are practically no differences. It only takes 10.3 seconds from a standstill to 200 km / h, and with a top speed of 255 km / h, the CBR is at the forefront of the 600 league. And, as I said, all with highly effective exhaust gas cleaning via a catalytic converter and an upstream secondary air system (see MOTORRAD 4/2001).

The CBR test bench certifies environmental friendliness even after it has been in the wild without an ECE test cycle. That should be worth a little applause for the consistent Honda policy. If the tested, cat-less 600 in motorcycle 25/2000 annoyed with its due thirst for the expensive fuel, the German catalytic converter model with 6.2 liters of country road consumption remains in the acceptable range, but still tips at a constant 160 km / h one too many behind the bandage.

With its throaty, aggressive suction snorkeling through the two ram air air locks, the CBR 600 F underlines the maneuverability and agility it has gained. So that the sprint is not interrupted for an unnecessarily long time, the gearbox changes gears quickly and reliably with a gentle tap and free of wild gear shifts. The Honda would not be a Honda if it weren’t for such little things as the smooth clutch, the spontaneous but finely controllable throttle response and the low load change reactions that made it possible for people to subdue the machine.

A philosophy that is logically continued in the chassis and equipment. Nothing is left to chance, with the CBR 600 everything fits and sits. The background for the universal workstation mentioned at the beginning lies in the ergonomically well-dimensioned triangle of handlebars, rests and bench. The heavy handlebar stubs, made of solid cast steel, absorb the engine vibrations and are ideally at hand. Switches, levers, everything perfectly defined and arranged. Tucked in narrowly, the rider will find a wrinkle-free, comfortable spot behind the 18-liter tank that makes perfect contact with the motorcycle.

It is a tradition at Honda that everyone feels comfortable straight away. Whether or not you like the comparatively conservative outfit is a minor matter, everyone loves driving a Honda. Because curves of any type and at any speed can be mastered without tricks and refinements. Driving a CBR through the area is not more strenuous than driving the S-Bahn? just a thousand times more exciting. Like a sharp knife, it cuts its line into the asphalt, hitting the point exactly where its pilot wants it. Desert potholes, apexes smeared with clay, freshly graveled braking zones, the CBR 600 F smuggles its way confidently through enemy territory, hisses casually through lightning-fast alternating curves and drives through long, fast arcs as if on rails.

Steering precision and handiness stand for such virtues in the point evaluation, and that’s where the CBR cashes in on the country road. Not only foremen, but also apprentices use the good-natured CBR 600 F to cope with everyday underhands with left and without magic. Or with the right. Because the brake leaves little to be desired in terms of controllability and feedback. Regardless of whether on slippery, damp downhill stretches or when anchoring heavily at high speed, the quality is convincing and is confirmed by the excellent measured values ​​and records in the brake test. Which doesn’t mean everything went smoothly. Some measurements at the absolute locking limit were interrupted by a dubious front wheel punch. When cross-checking with a different type of tire, however, the unrest turned out to be less of a problem with the fork and set-up, but rather as the only striking weak point of the tires: Michelin Pilot Sport “E”.

As befits a real CBR 600 F, the pillion passenger will find a pleasant ride. Sufficiently wide, equipped with a solid handle, the intimate togetherness on the Honda lasts longer than an extended day’s stage, it is a whole vacation in it. There is hardly anything to complain about during the brisk curve dance, even in doubles, only on badly prepared country roads the rear shock absorber occasionally blocks. With the Soloritt, on the other hand, you can enjoy the high level of suspension comfort without the Honda appearing doughy or even unstable. On a pitch-dark night, the bright and clearly defined cone of light dips a little too deep through the softly coordinated fork when braking and disappears into the dark nothing. The bottom line, however, remains the same: The CBR 600 F is also the most balanced street sweeper in the 600 series in model year 2001. Traveling or racing, Honda can do it all.

Therefore we are now turning the fear nipples out of their stops, pulling the tire warmers from the rubbers, thrashing the CBR around the racing circuit in Rijeka and marveling at the perfect implementation of the driver’s commands. Lawn made easy because every steering command and every correction is implemented precisely. Dedicated racers complain about the soft coordination of suspension and damping, about the permanent slight rolling movement in the chassis. The robbery is still in a great mood, the pilots like to play and play reliably over many laps, the brakes are hard to get down.

With every lap, tenths of a second, side stand and footrests are honed. The engine really gets going on the slopes, goes to great lengths and turns as hard as it can. If that’s enough, a small yellow light in the cockpit gives the signal to change gears, which guarantees seamless, powerful propulsion even in hectic sports. Is that enough to keep the contentious pack of 600 at bay? We will tell you about it in the next issue.

Heated grips, exactly. Infinitely adjustable, that’s still missing. But otherwise an impeccable tourer, this athlete. Or would you prefer to mount sticky racing tires and pound the slope like a pierced one? Here you go, the Honda CBR 600 F leaves enough room for maneuver, it can do one like the other.