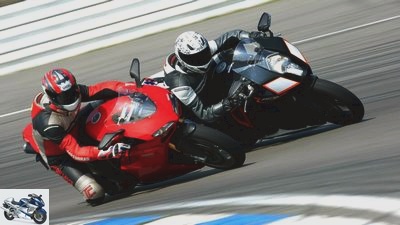 KTM wants to beat Ducati, the two-cylinder manufacturer par excellence, with its own weapons. The new RC8 R aims directly at the 1198 S with a stronger engine and modified chassis. The two premium racers met in Hockenheim to test their strengths.

Some tried it, but none made it: Neither Aprilia with the RSV mille nor Honda with the VTR or Suzuki with the TL-1000 models could endanger Ducati’s supremacy in the construction of two-cylinder super sports bikes. Honda was closest with two Superbike World Championship titles, but because they couldn’t be translated into sales successes, the Japanese quickly turned away from this concept. With the development of the RSV4, Aprilia also went over to the four-cylinder faction.

KTM I do not want that; At the beginning of last year, the Austrians presented their first own super sports bike with a V2 engine, the development of which they have already pushed a good step forward: The new RC8 R was created as a basic motorcycle for racing, and it made an impressive debut in the Superbike IDM. In three races, i.e. six races, Stefan Nebel and Didier van Keymeulen in their RC8 R came several places ahead of the best Ducati to the goal. In the hands of the IDM elite, the RC8 R unfolds a lot of potential, which aroused the curiosity of the MOTORRAD testers. What does the Austrian bring with her as standard, how well does she work on the racetrack?

The KTM engine, a compact, upright 75-degree V2, not only equipped itself for its racing career with two millimeters more bore and 47 cm³ more displacement, it also provides 15 hp more power than the standard model. Nominally, it surpasses the Ducati 90-degree V-engine, which is homologated with 163 hp 1198 S. On the MOTORRAD test bench, however, the Italo-V2 produced 170 hp, which is 1.4 hp more than the KTM engine. The fact that it feels like sheer elemental force compared to its Austrian competitor is more due to the upswing that power and torque take from 7000 rpm. This high continues up to 10,000 rpm; it is up to 14 hp and 15 Nm above the steadily rising KTM curve.

There is no doubt: with this performance characteristic, from the apex of a corner, the Ducati’s big hour strikes. Especially since their traction control (Ducati Traction Control, DTC) helps to bring the power to the road. Level four of eight is a good starting point for approaching easy drifts. Superbike world champion Troy Bayliss rode stage two at the presentation of the 1198 S in Portimão, Portugal, which intervenes even later in the case of slides. You can understand why the Champion is not too good for the system of a production motorcycle, the DTC driving experience is really amazing. Supported by the firm rear suspension, the electronics guide the motorcycle out of the curve as if on rails. No pumping, no crumpling of the hindquarters bothers on the Ducati when the KTM is already clearly kneading its rear tire and this indicates that the limit range has been reached. It remains to the credit of the RC8 R to provide this precise feedback by mechanical means. On the Ducati, the DTC signals this condition by interrupting the fuel supply; the previous reduction of the ignition point in three stages remains unnoticed.

In connection with the engine power of the two 1200 twins, it should not go unmentioned that they deliver a dead race in pure straight acceleration with all the liveliness of brilliant revving – both reach the 200 km / h mark after exactly eight seconds. The average of all pull-through measurements shows a small advantage of the Ducati of between 0.2 and 0.4 seconds. Ergo nothing world-shaking. Accelerating on an incline is a much more difficult balancing act. So are the different balance of forces on the race track and the test track an indication of the indispensability of electronics? On the one hand, yes. On the other hand, the KTM proves that with a higher top speed and a shorter gear ratio it compensates for some of what it lacks on the crankshaft in between.

Since last year, the KTM engineers have modified the circuitry of all RC8 models. The R indicates that the first gear is often even without a robust one “Clone” can insert. In the further course of the journey, the transmission finally proves to be a smoothly acting partner. However, the prerequisite for this is the correct setting of the shift linkage. If the footrests are moved, the small lever on the gearshift shaft must also be turned further, otherwise it will be at an unfavorable angle, the gearshift will be inexact and require too much force. If everything fits, the gears on the RC8 R snap after a light, short dab of the tip of the left foot, the operating forces are less than on the Ducati.

The Ducati Twin reacts to load changes a little more gently than the KTM engine, although the busy KTM developers have already made great progress in this area. The driver quickly internalized the soulful plucking from the zero position, and if he then manages to accelerate only once per corner, there is no problem. In addition, whoever orders an R has the choice between two throttle grips; one of them winds up the throttle cable linearly with the angle of rotation, it was mounted on the test machine. The other is intended to enable gentler load changes by catching up with less pull length at the beginning and acting progressively as it continues to pull.

While the chassis of the 848, 1198, 1198 S and 1098 R are basically the same and only differ in the spring elements, the chassis of the RC8 R has been modified more extensively. Modified triple clamps extend the caster by seven to 97 millimeters compared to the standard model, and because the R is only driven solo, the fork and shock absorber have softer springs. The hindquarters in particular gain comfort without looking slack. While the KTM springs nicely synchronously at the front and rear, the 1198 S combines a softly sprung fork with a fairly hard sprung hindquarters. This setup is ideal for pilots who like to brake far into a curve, make a tight curve at the apex and then accelerate powerfully. Those who prefer to drive at higher cornering speeds will find it inhomogeneous because of the more pronounced pitching movements.

The seating position on the KTM is always surprising. Even when the wide handlebars are in the lowest position and the rear frame with seat and footrests are in the highest possible position, the driver sees himself with a relatively upright upper body, in a wonderful position for sporty country road driving. Is this attitude also good for the racetrack? After all, the Ducati, after all the reference in this segment, integrates its pilot more strongly towards the front wheel, in fact in an almost aggressive stooped position. Don’t worry, that fits and is even an important prerequisite for the superior maneuverability of the Austrian, who literally drifts away from the lazy Italian in the curve entry and in alternating curves.

The KTM’s anti-hopping clutch plays an important role in this, as it works so well that the driver does not have any problems with a rear wheel pounding or slipping in an inclined position when shifting down when entering a curve. Drive up, brake late, downshift, put the clutch in and off you go in an inclined position. How easy this is becomes clear when compared to the Ducati, which, in addition to the usual activities such as brake pressure metering, downshifting and turning in, requires accurate work on the clutch lever.

With deep stumps, a high bench and high notches, the KTM offers the best ergonomic conditions for the race track. The eccentric of the rear suspension should then be in the middle position. Because with a more aggressive chassis geometry through an additionally raised rear – the adjustment range of the eccentric is twice as large as with the standard RC8 – the R lifts the rear wheel far too quickly when braking.

On the other hand, it becomes difficult to bring enough weight forward when accelerating vigorously on the racetrack when the bench and rests are low and the handlebars are mounted high. Then the front wheel often climbs in an inclined position, which does not make you fast in the long run. The royal road consists of a narrow path between these extremes. Incidentally: Even on fast stretches of the motorway, the KTM does not behave in an exemplary manner with its low driver position; at high speed the front is relieved too much.

As you can see, the KTM not only offers more adjustment options than the Ducati, which is not exactly poor in terms of variability, it also requires the driver to find the optimum among these options. The differences between the two extremes are too great to be careless. The Ducati is more of a stoic character and reacts less strongly to different attitudes. Because of the front-wheel-oriented driver’s position, it looks as if it were ten kilograms heavier at the front. It is the other way around; when stationary, the KTM puts almost eight kilograms more on the front wheel.

Overall, the RC8 R has shown that it is worth its self-assuredly designed price of 20,995 euros plus additional costs. The suspension elements are of high quality – more expensive for the manufacturer than the Ohlins parts of the Ducati, as a KTM spokesman noted – the equipment is extensive and in terms of workmanship nothing is left to be desired. The only thing missing is the fantastic traction control of the Duc.