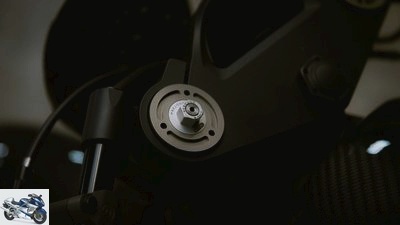 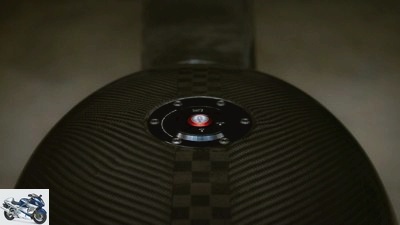 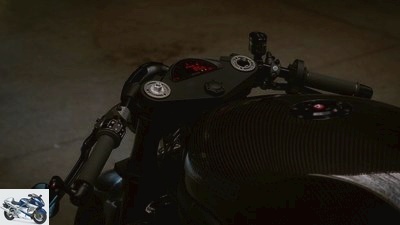 2/12
In 2021 the custom bike with the carbon monocoque will finally be finished.

3/12
However, it was not the immense effort that caused the delay, but the fact that Brice had meanwhile founded a new company with Workhorse.

4/12
The conversion to carbon was already done, only the rest of the Triumph is still in its original condition at the time.

5/12
Brice started finishing the Speedy. To do this, he took up the deep lines of the monocoque and added modern custom parts that he could only dream of in 2014. Including the Bilnker from Heinz Bikes mounted on the fork.

6/12
He had the fork bridge and stub milled according to his own design.

7/12
The rear panel of the Highsider lighting was created in a 3D printer.

8/12
In the standard fork, Brice built high-quality Catridges from Nitron, the fork bridge are designed for the Motogadget instrument.

9/12
The other noble add-on parts come primarily from Rizoma.

10/12
The carbon laminate is modeled after a checkered flag …

11/12
… a pattern that the tank also accepts. Again: that was back in 2014. When carbon was very rare in custom construction.

12/12
The adjustable catridges come from Nitron like the spring clip in the stern.

The customizers from Workhorse from Belgium gave a 2009 Speed ​​Triple 1050 a carbon monocoque.

The history of the Karbon-Speedy began a few years ago as Brice from Workhorse still rebuilt under the label Kruz Company Motorcycles. In 2014, Brice and Olivier started the Speed ​​triple 1050 from 2009 to be converted into a carbon racer. At that time, carbon was even more expensive than it is today, it is much more difficult to process and designs with this material are dependent on complex CAD processes and 3D scanning. Kruz separates during the creation process and the almost finished Speedy picks up dust, while Brice founds the Workhorse Speed ​​Shop and causes a sensation with sprint racers for Yamaha and Indian.

The child of divorce in carbon pulls Brice out from under a symbolic tarpaulin when the owner and client of the Speedy answers and asks if Brice has a slot to complete the project. Whether the call went off so smoothly is questionable, but the attitude of waiting a long time for a custom bike without feedback is a testament to patience. 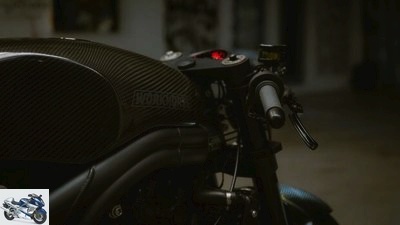 He has the fork bridge and stub milled according to his own design.

Fortunately, even a Cafe Racer from 2014 is braided in carbon, and in 2021 it will still have its finger on the pulse, because the production of the monocoque was a real ride for Brice back then. First, he laboriously carved the basic shape out of Styrodur, which was then scanned using a 3D scan. The negative form for the carbon laminate was then created from this data. The monocoque weighs just two kilograms with all brackets.

The lightweight monocoque consists of the rear and a tank cover. The actual fuel supply is located in an aluminum tank with a volume of 13 liters directly above the injection. On the angular substructure, there is now space for some electronic components from the significantly reduced rear, which was rebuilt from chromoly tubes. Brice rebuilds the on-board electrics using an M-Unit from Motogadget.

Triple on speed with 180 hp

The carbon shape was created in 2014 with the help of a 3D scan, and in 2021 the rear end will be created using 3D printing as a base plate and holder for the rear light and indicators from Highsider. The production of the new fork bridges for the fork upgraded with cartridges looks almost classic: CNC is milled here. This leaves room for a frame for the instrument cluster and for integrating the handlebar stubs precisely.

In addition to the components in the rear from Highsider or the wiring harness with a high proportion of Motogadget, the rest of the electronics also come from German companies: The micro buttons and the instrument cluster also come from Berlin from Motogadget, the indicators mounted on the fork are supplied by Harley specialist Heinz Bikes.

Brice builds high-quality Catridges from Nitron into the standard fork, the fork bridges are designed for the Motogadget instrument.

Brice claims a weight saving of a good 35 kilos with his conversion and, after the initial reactions, plans to launch a small series for the Speed ​​Triple 1050. Inquiries for kits for a Street Triple have already been received. Brice plans a good 12,000 euros for the conversion, including the donor bike.

Check the second-hand market, plunder your account, order the Karbon-Speedy. That is the plan. May this only come true in less than seven years. Great makeover.