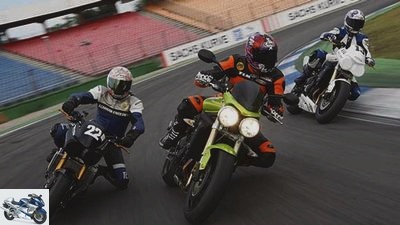 Three sisters: they have a lot in common and yet are so different. But since they are already standing together, there is the family check. The series fights on an unfamiliar course, the cup version has a home game, and the tuning triple hangs far out of the window.

Do you know that? The favorite uncle announces himself, the anticipation is great, but then only his wet kissing Olle shows up and doesn’t even have presents with her. An emotional crash condensed into a moment. No chance to slowly get used to the overall situation. The childhood days are long gone. But even a horsepower tester who is driven by motor skills and gasoline fantasies over and over again can catch up with such uncle trauma in everyday testing. So happened. In Hockenheim. In the paddock. The PS-Tuner-GP was the stage for this. Frank Hoffmann from Sport Evolution pushed the souped-up and accordingly announced triumph Street Triple in the box. The thick radiator with the neatly laid hoses, the Remus exhaust system and the somehow different looking fork maintained the expectation that this Street Triple from Koblenz is the meanest, nastiest and therefore coolest thing since triumphing the 675 triple in a naked bike has packed. But it was precisely this particular triple that decided the weal or woe of all those lofty expectations. Because no bland three-cylinder with a little extra taste thanks to a different exhaust and Powercomander would roll at the start, but the IDM triple from the G-Lab-Daytona should fuel the Sport Evolution thing. That would have been 144 hp. Oh you big egg!

But you can already tell from the subjunctive: The uncle didn’t come! The IDM and World Cup wildcard cost Sport Evolution a lot of time; so the Street Triple was only with the big cooler “prepared” for concentrated super sports power. Ooooh ?? Disillusionment. Aunt Hoffmann didn’t come without presents after all. Because the Street Triple shone with IDM chassis and brakes, delicious add-on parts and a quickshifter. She also had a few extra horsepower. There were also regular Triumph Cup triple and an untouched series triple in the editor’s box. That screamed for a “what if” test, cushioned the initial disappointment and guaranteed both refreshing and insightful rounds of the ring. The focus of this comparison is therefore the chassis: that of the Street Triple in general, the conversion of the Cup motorcycle in particular and that of the IDM winner in particular. Crowned with a few goodies from Koblenz. It’s not that bad. In order to be able to fiddle with the series Streety halfway adapted to a racetrack, there is only one intervention in the otherwise adjustable chassis: The spring base on the shock absorber has to be raised and the rear screwed up accordingly. The green Street Triple in Hockenheim waggles and pumps so brutally from a standing start that a clean line is impossible. This works much better with a higher tail, although a lot of movement remains and the feedback suffers a lot.

In principle, the same applies to the fork, the only difference being that the brake is in stark contrast to the soft core of the fork. The first brake at the end of the Parabolika almost turned into a fiasco: the fork struck straight through and the whole motorcycle fidgeted ominously. Actually, one could tick off the production motorcycle at this point with the conclusion that it has lost nothing on the racetrack, and add to the protection of species that hopefully nobody seriously intends to do so. But there is still this formidable motor, which, despite only measuring 104 measured horsepower, spreads a good mood, even if it lacks the juice in the parabolic. And that brings us to the Cup motorcycle, which uses the series drive and gives the top riders from the Street Triple Cup lap times of just over 1:55 in Hockenheim. You mainly benefit from the revised chassis. 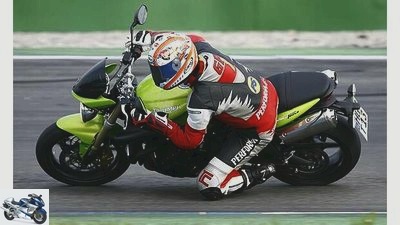 Both the fork and the shock absorber are significantly harder. The 2008 configuration does not have any adjustment options on the fork. But there is less movement in it, so much more is possible compared to the series: The braking points move significantly towards the curve. At the end of the parabolic, the fork successfully braces itself against the braking attack. At the rear, the fully adjustable shock absorber offers all options for adapting the cup triple to personal needs. Even a pressure stage in high and low speed is available. This makes handling considerably better, and the feedback creates absolute trust. This of course includes appropriate tires. While the series with the Dunlop Qualifier skins performed relatively well in summer temperatures, but had to pay tribute to the location, the Cup Triple plowed on perfectly harmonizing Bridgestone BT 003 skins with official material around the GP track. Then there are the LSL notches and Pazzo levers, which underline that good accessories really have a lot to do with functionality.

And then it was the turn of the tuning aunt, my God, if 144 horses would have been exciting here. Because the last points of criticism of the Cup version returned the unique Sport Evolution under the asphalt: The responsiveness of the chassis caused the tongue to click. And finally, braking stability was no longer an issue at all. Handling? Well, you are sitting on a naked bike. With fingertips on the handles, as with corresponding super athletes, this is generally not possible. But with the nimble stilts and the in-house geometry from Koblenz, this sharp hum can be surfed through the Sachskurve just as playfully as it twirls around the disgustingly narrow hairpin. Incidentally, Frank Hoffmann has also given his triple Wieres brake discs with Lucas pads, giving the driver even more power in male situations when quick deceleration is required. That looks all the more impressive because the standard triple stoppers already work well.

With another tuning part, Hoffmann landed an additional hit. The Quickshifter concealed the impression that is often recurring with the triple driver and shared by series and cup bikes: the transmission is pretty clunky and refused? if you want it to happen very quickly? already the next course. And the engine? 117 hp, that means almost 13 horses more. They were especially around the top, in other words: from around 8000 rpm, they were felt. It wasn’t completely linear, and neither was the series. But you already needed the long parabolic steroids to track down a slight drop in performance roughly in the middle. Thanks to the coordination with the Remus system of the IDM-Daytona, the Hoffmann Triple also had a gentler use of force. The cup version stood out in a downright gruff manner. She acknowledged spontaneous gas commands with a stubborn jerk. Better, if not exemplary, did the series, topped by the tuner bike, which, however, could not completely shake off this quirk. A marginal note at the end: In one point, the series Street Triple crosses the finish line as the winner from a tester’s point of view. Concerning “Look from the front” does it offer two spotlights and a pretty designer umbrella? it’s not for the racetrack, but something for the eye. It’s a shame that the racers don’t have a retro number plate on the front. That also helps better in keeping apart. 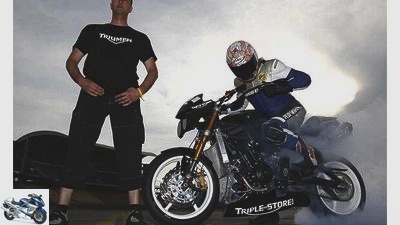 Conclusion: The family day at the Triumphs shows that an appropriately made chassis is the alpha and omega of a fun day on the racetrack. The Cup version of the Street Triple underlines this in particular, because it shares the engine with the series, but still casually overshadows it. The fact that the series does not fail completely is again due to its engine? a real ray of sunshine. The ultimate is the Sport Evolution Triple, which is blessed with pieces of cream and puts racing in a bright light with the naked dwarf. But then it should be a few more horsepower.

Since the Cup-Triple is largely identical to the series on the engine side and the performance curve is almost identical, we have dispensed with a third performance curve. In principle, both engines pull through cleanly and deliver their power very linearly and over the entire speed range. The slight dent at around 7500 rpm is actually not noticeable. The parallel flight of the series and tuner GP triple on both curves is amazing. The power plus of the sport evolution triple beyond the 8000 rpm is clear, which also locks a tad later. The fact that the curve only starts at just over 4000 is due to the measurement method, which ignored the low speeds of the tuning bikes. 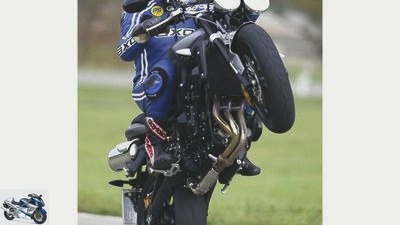 Triumph Street Triple R. With the normal Street Triple, the British have brought a very good mid-range motorcycle to the start, which is particularly impressive on pretty country roads with its easy handling and a very nice engine. “Do-gooders” she pretty much fulfills every wish. The somewhat hotter fan of the little naked triple quickly reaches its comfort limits when it comes to the chassis, even on public roads. The R version was the logical consequence: Fully adjustable shock absorber and a 41 fork, which can also be adjusted in terms of spring base, compression and rebound. This means that the R is very well balanced with sporty, firm cushioning, but still offers enough comfort. This gives her a very neutral driving behavior, enough reserves for the individual adjustment and a clearly better response behavior both on washboard slopes and on smaller pitches. In addition, she got the Daytona brakes, a slightly higher quality handlebar and 800 euros extra for all of this. This pushes it between the series and the tuning triple presented here. Logical step: in 2009 you can start the Street Triple Cup with the R; so far, 15 cuppers have made this choice.