Introduced in 1990 and appeared in France the following year, the 900 Trophy immediately established itself as a queen of the road. The Triumph brand has been reborn since its takeover by John Bloor and skeptics were quick to be reassured by the quality of the first motorcycles on the market.. The model presented here dates from 1993. The Triumph Trophy 900 will be marketed until the beginning of 1996, to make way for a new round-shaped Trophy commonly called "the whale". 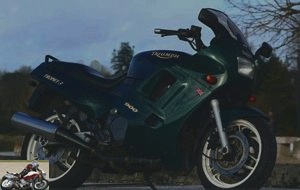 It is beautiful, very distinguished in its English green and hides under its skirts a three-cylinder engine that is as smooth as it does not wear out. On the surface, the 900 Triumph Trophy looks neat and imposing…. Note the elegant digital clock integrated into the fairing, period, with its three adjustment buttons 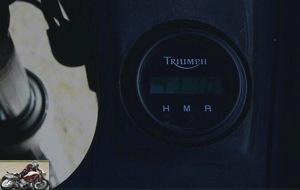 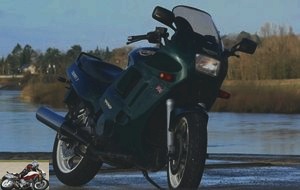 A little high to climb, once on board the bust flexed just as it should and the hands resting on the handlebars, you feel at home. As soon as the engine is switched on, the three cylinders sing a pretty chant, punctuated by the tachometer needle, inserted into the elegant dashboard …. 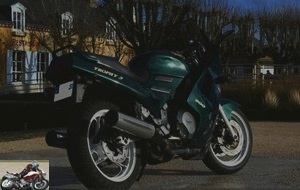 The high center of gravity does not make this Triumph an extremely practical city car. This (vague) feeling of escape at low speed, as soon as you change direction, does not encourage using Miss Trophy to propel yourself to the nearest supermarket. This is a real motorcycle anyway, loving to warm up before it actually purrs. In other words, flea jumps are not his favorite exercises …. 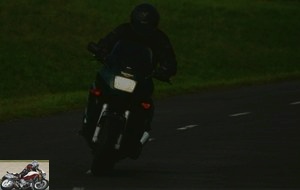 In use, this "sportivo GT" proves to be a formidable weapon. The fairing rather well studied protects from all turbulence and its three legs never lack of breath. Distrust, we quickly find ourselves beyond 200 km / h without having really sought provocation. Well sheltered behind the bubble and without parasitic actions of the chassis, we find ourselves winding happily, having fun with its sweet six-speed gearbox, while forgetting that going too fast is forbidden …. 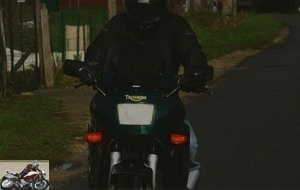 Extremely well protected at the heart of an efficient fairing, you can trace at high speed, for a long time and without fatigue. You hardly feel the turbulence and swallowing the big curves in all serenity remains a real pleasure..

Comfortable saddle, ideally placed footrest, protective fairing support bar…. At the stage, the passenger asks for more. The pilot too, the behavior of the Triumph being strictly identical depending on whether it carries one or two people on its back …. 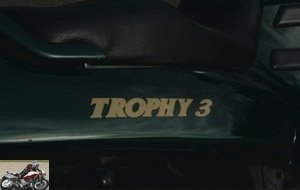 The rear disc barely slowed down the crew. On the other hand, the pair of front discs 296 mm in diameter with double piston calipers prove to be very effective …. 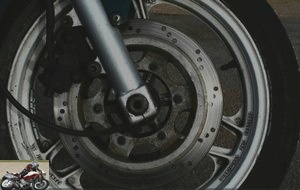 Voracious in sensations, the engine consumes very little. Even particularly sober. Around 6 l / 100 at reasonable speed. Count a liter more on days of crazy excitement. Overall, the range is 350 kilometers …. 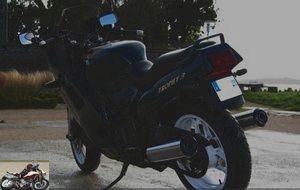 It is not uncommon to see Triumphs with over 100,000 km on the odometer without any real problems. The T3 is in the category of faithful motorcycles if its carburetion is well regulated and the oil changes carried out every 5000 kilometers.. 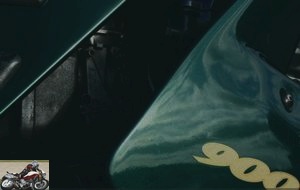 Introduced in 1990 and appeared in France the following year, the 900 Trophy immediately established itself as a queen of the road. The Triumph brand has been reborn since its takeover by John Bloor, and skeptics were quick to be reassured by the quality of the first motorcycles on the market. The model presented here dates from 1993. The Triumph Trophy 900 will be marketed until the beginning of 1996, to make way for a new round-shaped Trophy commonly called "the whale". According to the Triumph France press service, around 500 motorcycles were sold in France during his career. A rather modest commercial result in front of a large Japanese competition. As on the Sprint (semi-faired), the Trident (roadster) and the Daytona (sport), the frame and the engine of the Trophy are common to the range of Triumph 900 cm3. 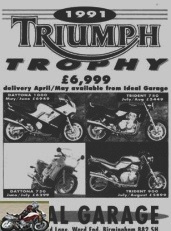 A bite of bread! Unlike the Trident or Daytona, the Trophy costs little. Less known and not very widespread, it is still possible to find a beautiful Trophy 3 in the classifieds at more than reasonable prices. Less heavy and more nervous than its sister the 1200, it is not recognized for its true value. For 1,500 to 2,000 €, we can find a copy in very good condition, especially as the T3 ages well. What to have fun and access the Triumph myth at a lower cost.

Apart from regular routine maintenance, a few points are worth noting. During revisions, mechanics or handymen have the annoying tendency to remove everything that in their eyes is useless in order to make a little space. Except if the cover under the ignition coils serving as thermal protection is missing, they will be happy to grill merguez style.

The starter drive freewheel does not withstand long tests of restarting after winter, moreover until 1994 a removable access hatch facilitates its replacement. Weeping at the clutch rod oil seals and the gear selector that do not always perform their role of sealing are frequent, but not serious. 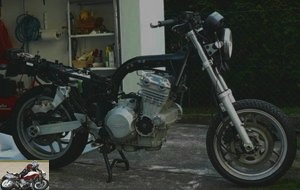 The shoe guiding the transmission chain must be replaced at the same time as the chain kit to prevent premature wear of the swingarm.. 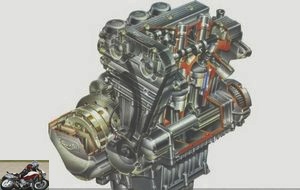 Finally, this engine requires a slightly increased air / fuel ratio setting to take full advantage of its torque, to the detriment of anti-pollution standards. These points respected, the Trophy 900 provides maximum pleasure in all serenity. 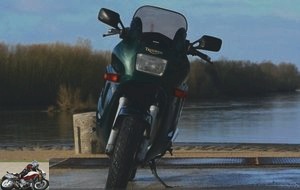 Equipped with a particularly pleasant three-cylinder engine, enjoying excellent road holding, suffering from no vibrations, comfortable, reliable, the Triumph 900 Trophy T3 is absolutely worth rediscovering. His spare parts still available, a second second-hand career is wide open to him. A delicious English way to slip away ! 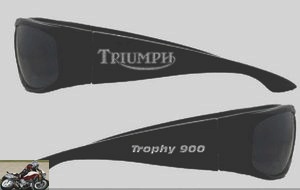 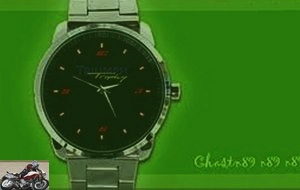 One thought on “Triumph Trophy 900”